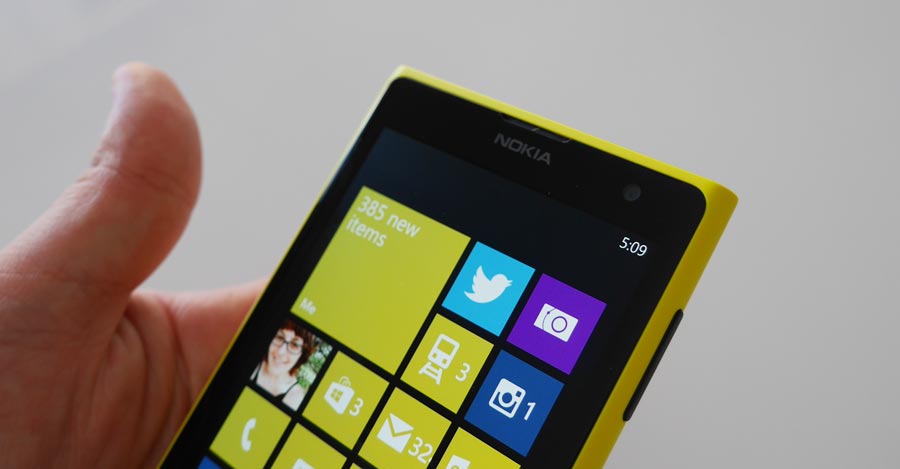 Nokia has been making a lot of strides lately, and the Lumia 1020 could signal a return to the top for Finland’s phone fabricator, with the handset including a beautiful design and finish, decent battery life, and one of the best cameras you’re ever likely to see.

Taking over the flagship spot from the Lumia 925, the 1020 takes much of the technology from that handset and gives it an update, especially in the camera department. In fact, you’ve likely never seen a camera like what Nokia is using here.

As such, there’s a dual-core Snapdragon processor clocked at 1.5GHz, Adreno 225 graphics chip, support for WiFi 802.11 a/b/g/n, DLNA, Near-Field Communication, Bluetooth 3.0 (though it reaches 4.0 LE with a downloadable software update in Lumia Black), and support for Cat3 4G LTE with downloads up to 100Mbps. Nokia has made one minor change, though, with 2GB RAM instead of the 1GB found in the original.

Storage is set to 32GB here, and there is no microSD slot, just like in previous models, so watching the data might be something you’ll have to do, and that’s because of the camera.

Unlike any other manufacturer out there, Nokia has provided a 41 megapixel camera, capable of taking not just high-resolution images, but also Full HD 1080p videos, too. A front camera is also included, though this is a 1.2 megapixel camera capable of recording 720p videos.

The screen in the Lumia 1020 is the same as it was on the previous flagships, sitting at 4.5 inches and running the 1280×768 resolution, though unlike the previous handsets, there’s an increase in the quality of protection on offer, moving from Gorilla Glass 2, to Corning’s Gorilla Glass 3.

Nokia’s inclusion of three hardware buttons remains consistent here, with the volume rocker, power button, and camera button on the right edge, while the front buttons are soft under the screen, and include a back, Windows home, and search button.

Ports on the handset are limited too, with a microUSB on the bottom and a 3.5mm headset jack up top.

The battery on the Nokia Lumia 1020 is rated for 2000mAh, and takes a microSIM in a pin-ejected tray at the very top of the handset.

We’ve heard things about Nokia’s Lumia 1020. Good things. Great things, with many people suggesting that this could be Nokia’s true return to the lead, with a device that not only makes people turn heads from design, but also brings together so much technology it will make your own head spin. Can it do this? Can it be that Nokia is back up there with the big boys?

In truth, Nokia has been making its way back up to the podium for a while now, and most of the Nokia handsets we’ve spent time with in the past twelve months have been excellent.

That said, the Lumia 1020 is better than these, and it could almost convert us.

Pick it up and you quickly realise that Nokia has done its homework, shaving off the grams from the overly heavy Lumia 920 from last year, and learning a thing or two from the aluminium-encased improvement that was the Lumia 925.

In the 1020, there’s no aluminium, but rather a return to the high-end polycarbonate body that we first saw on the first Lumia models from 2012, with a matt finish that feels excellent in the hands.

Lay it on the desk and it slopes up slightly, due to the protrusion from the camera on the back, but we’ll get to that later.

Nokia’s screen is also like that of others we’ve seen earlier in the year, with a 720p capable 4.5 inch screen that looks excellent and boasts around 332 pixels per inch, just above that of what the Apple iPhone 5S uses, and protected by the third generation of Corning’s scratch-resistant Gorilla Glass.

If you’ve seen a Nokia smartphone handset in the past year, you’ll find the Lumia 1020 as easy to use as any other Lumia, with Windows Phone 8’s simplistic tile interface running here, with a swipe to the side bringing up the one main menu.

Just like in other Lumia handsets, it’s one of the easiest interfaces to get your head around, with live tiles able to be setup with ease, large text that is very easy to read, and three soft buttons to help you get around the operating system. Easy.

From a performance point of view, there’s very little difference between the 1020 and the 925, as Nokia has included the same Snapdragon dual-core processor, same Adreno 225 graphics chip, and 32GB of non-expandable storage, though there has been an increase from 1GB of RAM to 2GB, which has no doubt helped to speed things up just enough.

As such, with this sort of tech underneath, the Lumia 1020 runs everything more or less perfectly, with multiple apps running simultaneously, virtually no menu lag or slowdowns, and an experience that doesn’t seem to skip a beat.

Mobile performance is much the same, and the 4G LTE device might not be Cat4, but it will handles itself really well, producing speeds between 40 and 80Mbps when you’re on the go.

Battery performance is also decent, managing around a day and a half of regular use, though we’d suggest to charge daily regardless, especially if you plan to make frequent use of either the 4G or the camera.