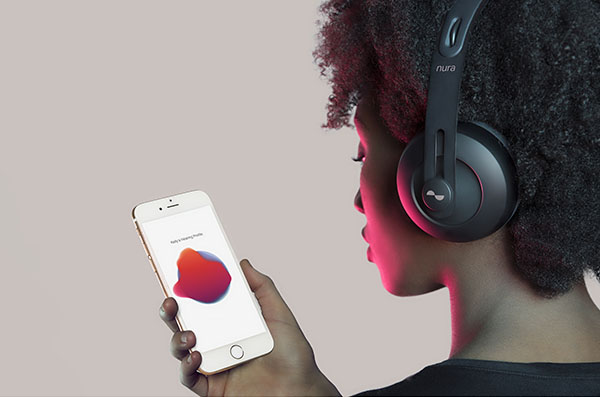 I started hearing about the Nuraphone Bluetooth headphones from several sources weeks before I was asked to review them. I confess I was sceptical as to their claims. But it turns out that these Australian-designed headphones deliver a superb musical performance. And do quite a bit more besides.

Now let’s jump straight into the most obvious visual difference between the Nuraphone headphones and all others. They are over-ear headphones, but also in-ear earphones. They suspend silicone tips on a kind of soft diaphragm inside the cups of the headphones. You put the cups over your ears; the tips press gently into your ear openings. You don’t – can’t – jam them in as you do with many earbuds. They just rest there. But they are soft enough, and shaped just so, that they tend to provide a reasonable acoustic seal. A secondary seal, that is, because the cups around the ears provide another acoustic seal.

In each earpiece are two drivers. The earbud part uses a 15mm driver, while the outer part uses a 40mm driver. The earcups have a closed back design.

Another visual difference: no lights, no apparent controls. There’s a (seemingly proprietary) socket on the right earcup for the included USB charge cable. It turns out that there are two touch-sensitive controls, one on each cup. Through the app you can assign one or two functions to each. They respond with haptic feedback, like the home key on an iPhone.

Also available, at extra cost, are four optional cables: analogue audio, Lightning, Micro-B USB and USB Type-C. The last three are for feeding a wired digital signal to the headphones. Each is available for $29.95, except for the Lightning cable which is $49.95. That one has inline controls.

To provide the highest quality Bluetooth connection with at least some phones, it supports the aptX HD codec. That’s also backwards compatible with aptX. Both provide higher quality audio than Bluetooth’s standard SBC codec. Does your phone support either version of aptX? Check here.

Apple iOS devices use AAC for higher than SBC quality audio, not aptX. The Nuraphone headphones support that as well, for the best that an iPhone can deliver.

The headphones come in a substantial and robust case with a magnetic clasp. Nura says that a charge of their battery is good for twenty hours. I’m prepared to accept their word for it because I’m still waiting. After many hours of use, the Nuraphones are still reporting a 60% charge.

(An update. I wrote that a couple of days ago. Since then I’ve listened for at least another four hours, and they now report a 50% charge.)

Now, here’s where things get very tricky. The headphones adjust their sound so that it sounds right for you. I confess that I was very leery of this. It seemed a little like black magic. Nura says that it uses otoacoustic emissions to determine your hearing. This is an actual thing. It is used to test the hearing of infants who, of course, can’t respond to questions.

Sound is sent into your ears where it excites the various moving parts; most importantly, the cilia. Those are the tiny hairs in your ears which vibrate in sympathy with sound. That’s how you hear. But back in 1948, a scientist predicted that they’d make a tiny noise in response. This was confirmed thirty years later. The Nuraphone headphones make a test signal and then measure those otoacoustic emissions. They can determine from them the characteristics of your hearing and adjust the frequency output of the headphones to take that into account.

The app lets you switch that adjustment on and off so you can hear the effect. The Nuraphone headphones can be set up with up to three profiles, so three people can use them. You can flick between theirs and yours and hear that they really are different.

Nura sent me the original Nuraphone. Now it’s selling the Nuraphone G2. In fact, they are the same. The G2 is an an upgraded firmware. My goodness, what an upgrade.

The biggest addition is active noise cancellation. That’s a system that captures sound outside the earphones, inverts it and feeds it into the audio, cancelling out the noise. That suggests some pretty powerful processing in the earphones. The active noise reduction, it seemed to me, was milder than some. Still, the overall noise reduction was at least as effective as that with the most famous brands. That’s because this active noise cancellation is on top of very effective passive noise reduction. I sat in front of my computer and played my in-plane recording at around 100 decibels SPL. The headphones brought it down to a mere gentle rumble.

Also added by the G2 upgrade: a social mode. This is kind of the opposite of noise cancellation. The microphones feed the outside sound in so that you can hear more clearly around you. It also lowers the volume of the material you’re listening to so you can hear what’s being said to you.

G2 also added double-tap functions to the single taps of the two touch sensitive buttons on the earcups. You can assign the social mode to one of the four options if you like.

The only written material is a small card inside the outer cardboard box. It just says to go to the Nuraphone website. That, in turn, tells you to get the app (for iOS or Android).

You get all your information from the app or the voice in the headphones. The app is clear and explains things well as it talks you through setting up your profile and conducting its tests. The Nuraphone headphones conduct the test tones quickly and they aren’t very loud. Nura says 60 seconds. I measured somewhat over two minutes. Either qualifies for “quickly”. The results are presented on the screen in a pretty circular graphic which, apparently, depicts the corrections required for your ears.

In the app, you can also choose an “Immersion” mode and set the level for it. This adds a bass actuator to the main cups, adding a more visceral feel to the bass (insofar as one can say viscera reside in one’s outer ears!) I thought it did well on every deep bass, but on some material it tended to muddy things up a bit. In fact, the native bass was superb without such processing.

In order to set up the Nuraphone headphones, you have to wear them. They switch on automatically when you don them. Take them off when music’s playing and the music pauses. Put them back on, and you’ll be welcomed back by that voice. In my case, they said “Welcome back Thomas 2” – I had set up two profiles, and I preferred the second one – “battery at sixty per cent”.

The sound profile is loaded into the headphones. There’s sufficient processing power within the Nuraphone headphones themselves to manage the EQ. Once they are set up you can disconnect from the phone and connect to any Bluetooth source.

For example, a few minutes ago I switched off Bluetooth in my phone, and the headphones responded by announcing that they had been disconnected. Then I paired them with the Windows computer on which I’m typing this. And then I started playing the same music I’d be playing on the phone. It was clear that the same adjustment profile was in place. In other words, the sound was identical, whether played on phone or computer.

The app lets you switch between your individual profile and a “Neutral” profile. “Neutral” sounded relatively poor, but not as poor as the “Generic” setting before the G2 upgrade. That one had a strong midrange bias and a kind of hollow effect. With my individual profile selected, though, the sound was very, very good indeed.

Now let me explain. My reference headphones are wired and cost around $700 and I selected them with great care. I’m not going to follow the many reviewers who’ve proclaimed the Nuraphone headphones to be the best they’ve ever heard. But as I’m sitting here, writing these words, the Schedrin version of Bizet’s Carmen is playing through them on a glorious Chandos recording, losslessly held on my network server. And it’s sounding magnificent.

The violin themes are sweetly delivered, sans any sense of sharpness. The castanets hover, surrounded by their reverberation. The snares snap out, over and beyond the rest of the music, without restraint. The timpani is full and fully accompanied by its harmonics. As I reach the Finale, the volume turned up to the maximum level, the bass drum punches with precision and power, and there is zero perceptible distortion as the music climaxes.

I often go to Switched On Bach to check for bass. And indeed, it was deep and powerful with the Nuraphone headphones. And clean. Even with the “Immersion” mode turned up halfway it remained clean and controlled.

The Primus album Antipop can be busy and difficult for equipment to reproduce properly. No such problem here. The Nuraphone headphones disentangled the various themes while delivering Claypool’s bass lead with precision and perfect balance.

The one significant improvement that could be made to the headphones would be to allow them another six decibels of gain. Music such as this, and much other classical, is recorded at a relatively low average level. Not just classical. I’ve now got playing “So What” from Miles Davis’ classic Kind of Blue. It’s the Direct Stream Digital version that’s streaming to the app on my phone, and the volume level is satisfying. But that’s with it maxed out. I’d like just a little more on tap.

But I’m being picky. What we do have here is headphones that are smooth, powerful, detailed and musical. Everything sounds as it ought to. That’s quite the achievement and speaks not to just the technical excellence of these headphones, and not just to the fascinating innovation in calibration, but to the judgement of the designers in targeting a wonderful tonal balance.

One quirk had to do with battery level reporting. With modern Android phones you can see the battery level of connected headphones in the notifications area and the detailed Bluetooth panel. But this consistently reported 100%, even though the Nura app was showing a lower figure.

Oh, I take that back. The G2 firmware upgrade fixed that!

The Nuraphone G2 headphones are simply excellent. They sound great. They are practical – except perhaps being a bit bulky when it comes to travelling. And when I asked Nura’s CTO and founder, Luke Campbell, whether any more upgrades are planned for the future, he told me that they were.