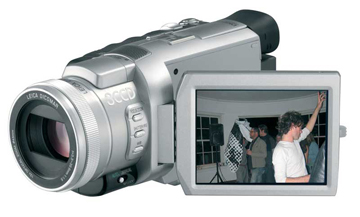 I?d have to admit bias here as this is the camera I chose for our family?s domestic unit. Its 3CCDs make it stand out from the crowd (for the price) and it has a large 3.5in LCD. Add the excellent still facility (4 meg) and it?s a brilliant all-rounder. I added the wide angle lens (screw mount) for $280ish and have been very happy with results. It doubles as my spare backup camera for when the big guys fail (hasn?t happened yet?)

This is a miniature professional camera in many ways. The fact that it has 3CCDs puts it up a class straight away. It?s a bit technical so here?s how the Panasonic website explains it – In this system, a prism splits the incident light into its three primary colours (red, green and blue) and each resultant colour signal is collected by a separate CCD. The 3CCD system reproduces colours with exceptional fidelity and captures even subtle gradations. That means its good but don?t expect miracles.

Its manual features are easy to get at and use. Once switched to manual the front ring becomes multi-functional – press a button and it can be the focus, zoom, iris, or shutter control. I like this a lot and once you?ve tried it a few times it does become easy to use and is much better than opening the screen and going through menus.

The LCD screen opens past 90degs so you get at the menu buttons more easily and switching from video to still camera is a breeze. While rambling about the still side, it has no lag when you hit the trigger. Add the long optical zoom (12x) and a good stabiliser and it?s a superb still camera.

The GS400 has an excellent night shooting capability including the great idea of having the LCD screen turn white and put out a nice soft light ? great for shooting sleeping kids for instance.

If you like to mess with video effects then on this camera you can preserve the precious original images. It can output the video with effects such as black and white, sepia, solarizing, and many others. The difference is that it does not affect the original recording so you can mess to your heart?s content knowing the original recording is OK. The camera also has professional stuff like colour bars and a neat little clip on microphone that doubles as a remote zoom/rec controller.

Another nice idea is the quick-start function which fires the camera back to life really quickly to capture that passing moment (much like your TV being on standby the camera is not fully powered down). It drains the battery faster but I use it while I carry the camera around in my hand then switch it off when I put it back in the bag.

The selling point for this camera is the 3CCDs but don?t get too excited just yet. Initially I was a little disappointed but then realised I was expecting too much from such a small camera. I?d been playing with the Sony HDV and Canon XL2 so was used to seeing professional level pictures. The three chips are great for rich colour and great resolution but this was never meant to be a broadcast camera and I was being too critical.

A few days ago I dragged out my old Sony (1998 vintage) single chip TRV9. I always thought the pics from this were great but the GS400 just left it for dead. Much, much sharper and richer colours (no reflection on Sony cams here ? I?m sure their new cameras are great too). Now I had my proper benchmark for this level and realised just how good the pics from it are. One thing that bugs me though is the 16:9 stuff. It does the cropped vertical trick (not a true 16:9 chip) and does it better than most (no softness or noticeable loss of quality). The LCD screen though does not properly display the 16:9 aspect ? it?s stretched vertically and everything looks a bit wrong. I?m used to it but my wife is not happy (and that?s NOT good). The seven year old Sony not only did 16:9 properly but it letterboxed the image on the monitor so you saw what you shot. Why don?t the new generation of cameras?