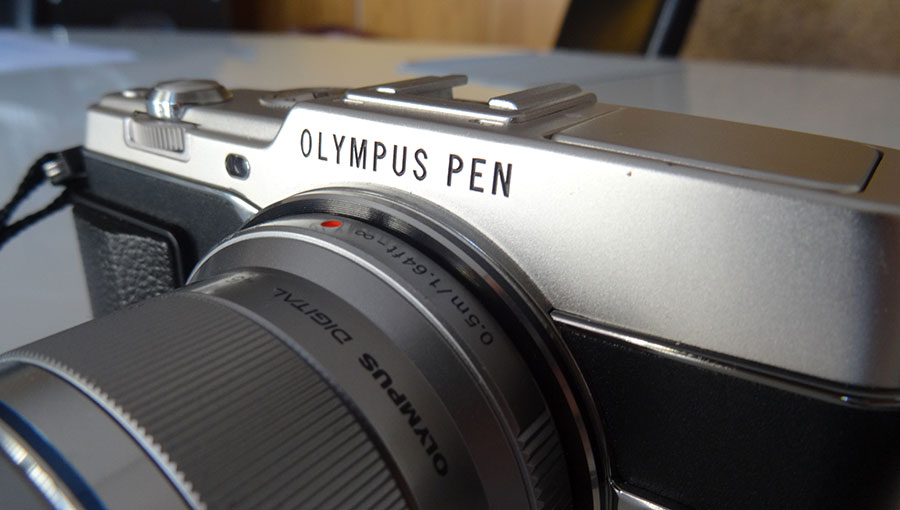 Looking like a piece out of history, the Olympus E-P5 takes design elements from yesterday and combines it with tech from today, resulting in a camera that looks like it will be one of the best we’ve ever seen. Does it succeed, or is the Olympus E-P5 all flash and no substance?

The latest in the reincarnated Pen series, the E-P5 follows up the E-P3 and skips the fourth number moniker, something we’ve seen from various companies operating out of Asia.

This version continues the design Olympus has been refining since it brought back in the first digital Pen cameras a few years ago, while increasing the specs and tightening up ergonomics and controls.

To start with, consumers will find the Olympus 16.1 megapixel LiveMOS sensor in this camera, up from the E-P3’s 12 megapixel, with a supported sensitivity range from 100 to 25600. Multiple aspect ratios are supported in this camera, ranging from the traditional 4:3, wide 16:9, square 6:6, and also supporting 3:2 and 3:4.

The camera features several focusing modes, and while there’s no built-in electronic viewfinder, there is a 3 inch articulating LCD on the back supporting 1.04 million dots and touch.

Like other entries in the digital Olympus Pen series, this camera supports the Micro Four Thirds lenses, meaning it should be compatible with any lenses in this system, including those from Olympus, Panasonic, and other manufacturers supporting it. Vibration reduction in the camera is taken care of thanks to 5-axis image stabilisation.

Shooting speed on this camera maxes out at 9 frames per second, two self-timers are available (2 seconds and 12 seconds), and numerous shooting modes are supported, including art, scene modes, framed images set up like a comic strip or multi-windowed piece of art, and manual modes.

Movie capture is also available here, with a stereo microphone built in helping the sensor to capture Full HD video to the camera’s SD card slot.

A flash is built in, too.

There are numerous buttons and dials on this camera as well as a hot-shoe mount and data port for Olympus accessories like the electronic viewfinder, while a tripod mount is underneath the camera.

Ports on this camera include one for USB and A/V out, and a microHDMI, while the battery compartment door holds the bays for the battery and SD card.

Making new things look old or retro isn’t exactly unusual these days, mind you, and everyone is doing it. We saw Samsung do that in the NX300 recently, and Fuji now does it across its range. Olympus does have a legacy in film, though, and it even had a “Pen” range, which is what the E-P5 continues.

Looking at that history is where the E-P5 comes from, and in this camera, Olympus appears to have crafted one of the finest nods to the old cameras we’ve ever seen.

We’ll start with the design which is classic Olympus. Our review model was silver with black detailing, though you can get the body in all black, with both of these colour options more or less acting as the traditional colour schemes for cameras.

We’re okay with that, and design-wise, this camera does look old school, with metal and plastic sections, a leather textured grip, and that retro “Olympus Pen” branding that looks like it walked right out of the seventies and plonked itself down here.

The metal look is also reflected in the build, and while this camera weighs every bit of its 420 grams without the lens, it also feels like a camera.

If you’re at all familiar with the old school metal cameras, you know exactly what we’re talking about, with strength in the body, and an overall heft that makes it feel like you’re carrying something worthwhile.

Olympus has more or less nailed ergonomics on this camera. While the body is smaller than a DSLR, you can still hold the E-P5 like a traditional camera, with your left hand under the body and lens, and your right hand gripping the side with the shutter on it.

On that side, you’ll find too perfectly metal wheels – one for your thumb, the other for your forefinger – making it easy to change settings on the fly, especially if you’re in manual (M) mode and you need to make your way around the shutter and aperture settings.

A second dial on the top will let you select the mode you want to shoot in, and this too is in easy reach.

A mappable function button sits up top, too, while the back features a smattering of buttons that make it easier to shoot with.

One of our favourites is the control selection switch, which allows you to jump between two sets of controls quickly, each able to be customised by you. For instance, the first position for us let us change the aperture and shutter speed using the main dials, while the second position changed those dials to fiddling with white balance and ISO settings.

It’s a good design, and one that lets you quickly modify settings very quickly.

Also of use is the magnifying glass button sitting just beneath the control switch, which will zoom in quickly to a part of whatever you’re focusing on, showing you the image at between 50 and 100 percent in a specific section, thereby allowing you to see the detail up close and nail focus yourself (below).

When you fire the shot, you’ll see the entire image, but you’ll have focused for roughly 100 percent, essentially giving you the sharpest image you can get.

It’s especially useful if you’re using manual focus, as it allows you to change that focus quickly, and we found it very useful when getting up close and personal with flora and fauna, as it helped us to find the detail we wanted to see in our images. Also of note is that the feature works regardless of what you’re using to take your photos: rear LCD or optional electronic viewfinder.

We’re glad to see the flash is still around from the E-P3, too, at least providing you with something if you don’t have an external, and the LCD touchscreen on the back is quite responsive, too.’