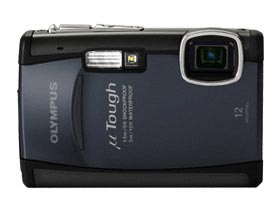 The Olympus Mju Tough 6010 is really the camera for you if snorkeling, diving, or climbing the face of a mountain sounds like something you might want to do sometime… it’s a digital camera that can resist almost anything you throw at it.

A member of the new Olympus Tough range that can last through practically anything – you know the ads with the dog chewing on the camera? – the Tough 6010 is a new model designed to be a fairly inexpensive water-, snow-, and shock- proof camera. Our tests ran it through the surf at Bondi Beach and dropped it from waist height onto hard cement, with the Tough 6010 never batting so much as an eyelid as we put it through its paces.

Waterproof down to 3 metres underwater, resistant to the cold to negative ten degrees Celsius, and able to take up to a 1.5 metre drop, you’ll find that this camera has been designed to take a beating. This means its perfect for the vacationer who knows they’re clumsy or has kids who often drop things. We were surprised that even a hard drop on the back didn’t crack the 2.7-inch LCD screen.

This is a good thing because the Tough 6010 is designed to be a slim armoured brick with a camera built in. You’ll find a 28-102mm equivalent lens to work with here affording you fairly wide images while still letting you get close to some action, as well as some filter modes for arty shots, face detection, and a variety of scene modes.

Sadly, the quality isn’t the strongest in the visual department. The images here work, but they’re not what you’d call high quality. Sharpness appears to be lacking despite the colour being strong and vibrant. Olympus has equipped this camera with high sensitivity capable of up to ISO 1600. Once you go over 800, however, the noise in the images becomes fairly noticeable.

In the water, you’ll find the controls somewhat fussy. While the function wheel has notches on it for easy grabbing, none of this seems to make using it underwater any easier. Luckily, Olympus has included a tap function that lets you bang on the sides of the camera to get things done.

We also had issues getting sand caught in the lens covering that snaps up when the camera isn’t in use. It would be better if Olympus didn’t have a covering there and just made the glass more scratch-resistant.

One other thing is the memory format. Olympus requires their own xD memory used in this camera, a format that is harder to find, more expensive, and is these days only used in one brand of camera: Olympus.

If you look at this on paper and say “this isn’t strong enough”, the top of the range Olympus Tough 8000, which claims resistance of up to 10 metres underwater, 2 metres shock, and crushproof up to 100 kilograms, would be the camera for you.

Tthe Olympus Tough 6010 is not the toughest of the tough, but it’s not bad. Image quality could be better but for the price, it could be a perfect vacation camera.