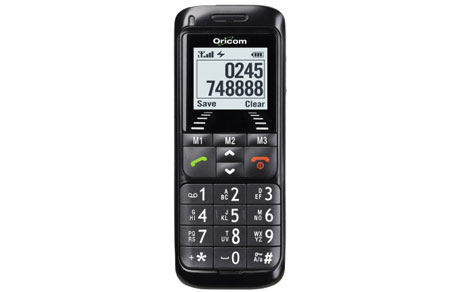 If you’re one of those people who wants their mobile phone to be just a mobile phone, then the Oricom ezy100 might be just the ticket.

There’s no camera, no mapping or internet functionality… it’s a phone, though it is exotic enough that you can also send and receive SMS messages. This phone is squarely aimed at the ‘more’ mature age bracket, and it’s not just the size of the buttons and the size of the text on the screen. On the back on the ezy100 is a slider switch, called the Emergency Call Switch, that when activated, sets in chain the following series of events:

These 5 numbers could be 000, a care, family members… anyone you so designate as being one of your emergency numbers. At the very least, if you do nothing, the 000 number rings as default in the Emergency Call Function. What the phone does is ring those five numbers in order, and if any are engaged, or go to an answering machine, the phone tries the next emergency number in your list. Another option for quick calling, in this case one-touch calling, is via the M1, M2 and M3 buttons just below the screen. You’re able to assign these three buttons to one-touch call a phone number each.

Some attention has also been paid to the sound aspects of the Oricom ezy100. The ring tone can be set to be as loud as 100 decibels, and the speaker can have its volume boosted to 25 decibels. There’s also a good, strong vibration alert, and the phone is hearing aid compatible, the in-built T switch means that there’ll be no interference between the two devices.

The one-touch option is good, but I feel the address book functionality of the ezy100 moves away from the strived-for user-friendliness of this phone. What is here is an address book with the look and feel of a phone from 1992. Simple yes, but whereas the Answer Call, End Call buttons are big and clearly labelled with green and red icons respectively, there’s no such iconic help with the address book. it’s accessed either through the menu, or you hitting the up/down arrow between the answer and end call buttons. Nitpicking perhaps, but everything about this phone aims for simple, and from experience I know that the target market of this phone can struggle with address book management.

The Oricom ezy100 fills a gap in the market which cries out for more phones like this – phone being the operative word. Just a phone. The finish is a little plasticky, and the battery life is a little on the skinny side – 120 minutes talk time on the ezy100, compared to figures like 6 hours achieved by many phones these days. Like any device, look at the features that really matter to you, and if it’s simplicity you’re after, the Oricom ezy100 is hard to beat.