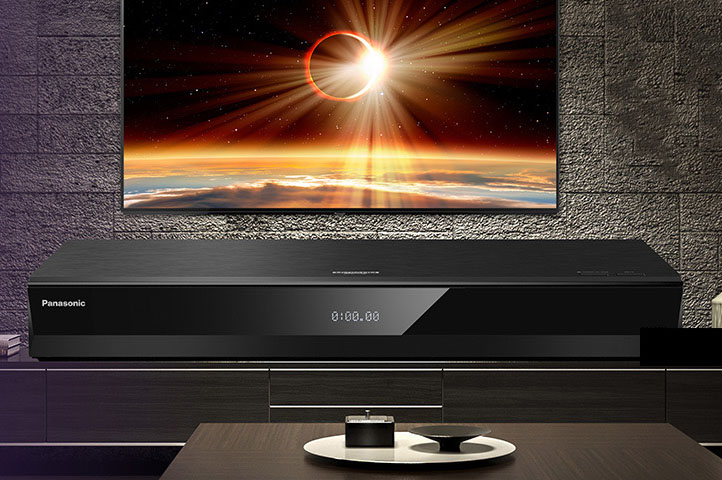 It’s time to spin some discs as I put the Panasonic DP-UB820 UltraHD Blu-ray player through its paces.

But first, why spin discs at all?

When it comes to quality home theatre, the good old optical disc is still the way to go. Streaming services like Netflix are wonderful and can even provide some content in UltraHD format. But they must compromise due to bandwidth constraints.

Take a full HD movie. If you watch it on Netflix, your TV will be fed data at around 3Mbps – for video and audio combined. If you watch the same movie on Blu-ray, it will be delivered at somewhere between 15Mbps and 35Mbps for the video alone. The sound is typically another 2.5Mbps, and sometimes more.

I’ve tested hundreds of Blu-ray discs, and the lowest video bitrate I’ve yet found for the main program was around 11Mbps.

Streaming services and Blu-ray both use lossy video compression, so the lower bitrate in streaming means more losses.

And on most Blu-ray and UltraHD Blu-ray discs, the audio is provided with lossless compression like Dolby TrueHD or DTS-HD Master Audio. On Netflix, even the Dolby Atmos-encoded audio is still based on Dolby Digital Plus, which is lossy.

So what should you use to spin your discs? My players of choice for more than ten years have been the fine products of Oppo Digital, a US-based independent arm of the same Oppo that sells phones. Unfortunately, and somewhat mysteriously, Oppo Digital decided to stop what appeared to be a successful business and packed it in a couple of years ago.

Which brings us to a replacement, for which I’ve chosen the Panasonic DP-UB820 UltraHD player. I’ll get to the specific reason I chose it shortly. But first, what does it do?

Well, it’ll play your DVDs, CDs, BDs and UHD-BDs. It will also play media from USB drives and from your network. It will also stream Netflix, Amazon Prime, Telstra TV Box Office, YouTube, SBS On Demand and ABC iView. But not Stan. And it also supports Miracast/WiDi so it can mirror your Windows 10 computer or Android phone. As I write, I have my Surface Pro 2017 display mirrored via the Panasonic DP-UB820 to an 85-inch projection screen.

On the back are two HDMI outputs. One of them provides video and audio while the other delivers sound only. The inclusion of the second one allows the unit to be used with older home theatre receivers which may not cope with UltraHD video. There is also an optical digital audio output (stereo only) and 7.1 channel analogue output.

I used the Panasonic DP-UB820 player with a Denon AVR-X3500H home theatre receiver, connected via HDMI, so I had no need for those other outputs.

The Panasonic DP-UB820 player has an Ethernet connection and supports dual band Wi-Fi up to 802.11ac standards.

Network stuff on the Panasonic DP-UB820

When it comes to network functionality, this player is sharply divided into two sections. The part for playing local network content is sleek, modern looking and effective. I mentioned how I could mirror my computer’s (or phone’s) screen to the unit. I can also use it as a photo, music and video renderer, with just about all my audio supported, including FLAC music up to 192kHz sampling. Photos and videos came through at full UltraHD resolution (if they were of at least that resolution).

But the Internet-related stuff was almost vintage. It uses the same layout Panasonic first introduced at least ten years ago. The above-mentioned apps are available, and there’s a “market place” with a few more. My impression is that the contents of this market place has been shrinking over the years, there being little ongoing support for its apps.

For example, there’s a Panasonic web browser. I note that the most recent version of it is dated 2012. Things have moved on since then. The browser is virtually unusable anyway since the unit does not support a USB mouse or keyboard.

Playing discs with the Panasonic DP-UB820

As far as regular disc playing, the Panasonic DP-UB820 is a perfectly competent player. It loads quickly, has plenty of fast forwards and rewind speeds. It can single step forwards and backwards with DVDs, forwards only with Blu-rays and seemingly not at all with UltraHD BDs. But it can slow motion with all of them (and go slow in reverse with DVDs).

The remote control is reasonably well laid-out and it includes numeric keypad. That makes it easy to key in 7-6-6-9, which is the code to bring up test patterns on Sony Blu-ray and UltraHD Blu-ray discs. Trying do that in the right cadence with a virtual keyboard is difficult.

The settings let you fiddle with the audio standards so that the output matches your equipment. By default, Dolby Vision is switched off. I’m not sure why, but if your TV does support Dolby Vision, switch it on so that you can get better-than-HDR with some UltraHD discs.

Equipment reviewers tend to carry on a lot about stuff in which all players perform pretty much identically. So let me short-cut all that and say that if you feed this player with quality content on Blu-ray or UltraHD Blu-ray, it’s going to deliver it as well as it can be delivered. It doesn’t do anything magic. It just does its job.

What separates players is how well they handle lesser quality content: specifically, Australian DVDs and some Australian Blu-ray discs.

The problem with some Australian discs

The great majority of Blu-ray and UltraHD Blu-ray discs deliver their content at 24 frames per second, just like it’s shown at the movies. Most Australian DVDs deliver theirs at 50 fields per second, the same as free-to-air TV. A field is half a frame. There are 576 horizontal lines of data (720 pixels wide, mostly) in a DVD frame. All the odd-numbered lines are in one field, and all the even-numbered lines are in the other field.

Because it’s really hard to smoothly convert 24 frames to 50 fields – there’d be a noticeable judder as some frames are repeated to make the numbers work – most Australian DVDs simply run the movie a little faster. It works out to around four per cent.

Now, if the content is a movie, each pair of fields were captured from the same film frame. To present them at best quality, the two sets of lines just need to be “woven” together and fed as a complete frame.

But if the content was from, say, an Australian TV show, then the two fields would have been captured at different times, one fiftieth of a second apart. So they’d show slightly different content and so they have be shown in sequence, not merged together.

(I’m simplifying things here. In reality some very sophisticated “motion adaptive” processing is employed to create the best of both worlds.)

Okay, so the processing of the video from Australian DVDs is different according to which of two types of content is on the disc. Fortunately when the DVD was developed, provision was made to include a flag in the video stream indicating whether it was film-sourced (“progressive”) or video-sourced (“interlaced”).

But there’s a problem with that: incredibly, almost all Australian DVDs have the wrong flag. If a player respects the flag then there are obvious and irritating visual artefacts on your screen during playback.

(And that’s without even considering that some Australian DVDs – and I’m talking about big movies here, like Independence Day, Mad Max and Pulp Fiction – actually put some of the fields on the disc in the wrong order.)

So players ignore the flag and try to work out which kind of processing to use simply by examining the video itself. That’s a hard thing to do and sometimes they get it wrong. Over the years I’ve identified a number of “torture tests” that most commonly cause players to get this wrong.

What the Panasonic DP-UB820 gets right

The automatic detection processes in the Panasonic DP-UB820 are, as far as I can tell, perfect. They correctly detected the format every time and applied the correct processing.

To be clear, that is an extremely rare feat. I’d estimate that of the hundreds of different devices – players, projectors, video processors in home theatre receivers, and of course TVs – I’ve tested with these clips, fewer than one per cent did perfectly.

Even the highly regarded Oppo players couldn’t do that. Indeed, I managed to convince the Oppo people put in a special “Force film” playback mode that would switch off the detection processes and simply weave the fields together for perfect playback on selected discs.

And the further good news about the Panasonic DP-UB820 is that it also has a playback mode that can force processing appropriate for film, or for video. Except that since the automatic detection is so good, you’ll probably never need to resort to it.

Incidentally, I have never found another player of any brand with this ability to force film mode. But Panasonic has had it for years, at least as far back as a Panasonic DVD player I purchased in 2006.

So, for playback of high-quality Blu-ray and UltraHD Blu-ray discs, pretty much any player from a respectable brand will do the trick. But if you want best performance from other discs, I can’t recommend the Panasonic DP-UB820 highly enough.

Panasonic’s page for this player is here.