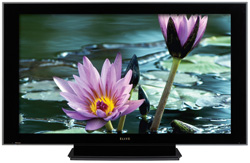 The very first on the Australian market was from Pioneer. And rather than go oversize to fit all those pixels in, it managed to squeeze them into a 50 inch (127 cm) panel.

The PDP-5000EX is a plasma display, not a TV, so there is no built-in TV tuner, nor speakers attached.

In addition to the vast number of pixels (there are over two million of them), the display offers a contrast ratio of 3000:1, the usual analog inputs plus a DVI and two HDMI inputs to handle high definition digital video.

With the display you get your choice of a desktop stand or a wall bracket, and the services of a technician to install it and run you through what you need to do to use the display effectively.

Ultimately, the quality of a display depends upon the final picture adjustments you make. This display has the usual range of adjustments, such as colour saturation, contrast (white level brightness), brightness (black level darkness) and so on, including the ability to exercise some control over how interlaced video is turned into progressive scan video.

But you needn’t trouble yourself too much with these, because after using the panel for about a hundred hours (which gives it time to settle in), you then make use of another part of the package that comes with the display: proper calibration by an Imaging Sciences Foundation-trained technician. He or she goes into the calibration settings unavailable to the end user, and with the aid of expensive measuring instruments, creates ‘ISF Night’ and ‘ISF Day’ picture settings that provide the most accurate possible picture in your particular environment.

Generally plasma displays have more distinct boundaries between their pixels than equivalently sized LCD TVs. But that wasn’t the case with this TV, which had the smoothest plasma display I have yet seen. Even up far too close the picture remained clean and coherent.

With DVDs delivered by an excellent DVD player, the picture was superb. But that paled against HDTV and Blu-ray.

What I most noticed about the panel was, well, nothing. With Blu-ray, all the things I look for to ascertain weak points of performance were missing. Instead, the display just disappeared; took itself out of the whole viewing process altogether. I sat there and watched movies, and not once was there anything but perfection. Or where there was imperfection, it was caused by the Blu-ray disc (the 60 hertz frame rate caused jerkiness, but the panel supports the smooth 24 hertz output from future players). But mostly it was just perfect.

You want the highest quality picture available in a direct viewing experience (rather than a projector)? Then the Pioneer PDP-5000EX offers it today.

Overall
Features
Value for money
Performance
Ease of Use
Reader Rating0 Votes
Superb picture quality, perhaps the best to be had on a screen of this side. Support for 24p output from future Blu-ray players.
Price - at nearly $11,000, inaccessible to mere mortals.
4.2