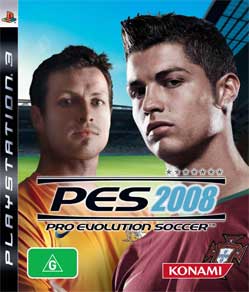 Pro Evolution 2008, the latest offering from publisher Konami, plays a reasonably entertaining game of football. We’ll say that right out, because it’s the most positive thing you can say about the PS3 version of this game, and if Pro Evo is your preferred poison, you’ll have some fun with it.

It’s difficult to write any review of a soccer – or rather, football to the millions who play it – game without falling into comparisons with the only other major football title on the market; namely Electronic Arts’ FIFA series. The reason for this isn’t necessarily that they’re very similar or even that they’re marketed as competitors but that the fans who buy the games get into sometimes hilarious battling over which is best. It’s like the console ‘fanboy’ arguments turned over to software concerns.

From the heavily-stylised but somewhat MTV-in-the-80s introductory movie footage, it’s clear that Pro Evo 2008 is taking an entirely different approach to appeal to their customers than that rival game. If you’re looking for slick overproduction, beauty that goes right down to the onscreen menus and a fluid interpretation of the game, you might need to jump camp. In Pro Evo, the menus are either an afterthought, or they’re a job given to the most junior coders Konami has in the building; either way, you need to get rapidly through the menus and into the action as quickly as possible because, if you’re a stalwart Pro Evo fan, it’s all about the ball physics, player AI and beautiful goals anyhow.

But don’t hold your breath. This year’s game plays a fast, scrappy game of football that is neither more or less ‘realistic’ than its FIFA counterpart. Konami boasts that the ball is always treated as a ‘separate entity’, which is actually more a sly dig at their rival than the description of a really distinctive feature. If you’ve played both games, the player models in Pro Evo will strike you as almost comical in their movement – strange, stick-like characters with legs that seem to scrabble madly and entirely separately from the bodies on occasion, giving the action a Charlie Chaplinesque air. There’s no noticeable improvement to how the game actually plays but it’s how it looks that really makes an impression, and not a good one.

Player strips are devoid of detail, the stadium crowds are nasty, generic repetitions of the same textures and the whole thing looks like an early PlayStation (that’s PSOne) game.

But the final nail in the coffin – at least for the PS3 version which we tested – is the ‘slowdown’. Slowdown is a term that describes a lack of fluidity and smoothness to what you see on the screen, with ‘jerky’ movements and a sort of stuttering effect.

Pro Evo 2008 on PS3 has so much of this slowdown that the game is unplayable online and even offline, against a mate in your lounge room, it destroys any illusion that you’re playing ‘the beautiful game’. Not that you’d bother trying to play the game online in any case – if the popup ‘warning’ message when you first try to go online isn’t enough to scare you off (basically, that Konami has ‘uncovered issues’ with the PS3 version of the game and is working to resolve them) – then the fact the company demands you enter a unique ‘registration code’ will likely finish you off

Pricing for the game on each platform is as follows:

Please note that Konami Digital Entertainment GmbH has released updates to rectify issues with the Xbox 360 and PlayStation 3 versions of Pro Evolution Soccer 2008.

The free download addresses the online lag and the slowdown that affects the game in both online and offline modes. The PlayStation 3 update also fixes problems associated with downloading the game to the console’s hard drive.

Konami will continue to look into ways to extend users’ enjoyment of PES 2008 and is still working on improvements. For more information visit http://www.atari.com.au/news/details.do?newsId=1250 or http://uk.games.konami-europe.com/news.do?idNews=293