Last year was the first time we had seen smartphones drop to a point where pretty much anyone could afford them, as Huawei and ZTE both joined in and provided Australian telcos with cheap handsets. So what does $99 get you in 2012?

At a hair under a hundred, Huawei’s Y100 certainly doesn’t cost much, but aims to pack in a fair chunk of technology with a size that makes it well suited to children and those after a small-screen experience.

First there’s that little display, with a 2.8 inch capacitive screen supporting a 240×320 display. It’s a tiny screen, especially in comparison to the 4 to 5 inch displays we’re seeing on smartphones today, but those after a small screen experience shouldn’t be bothered.

In fact, it may even be a good choice for anyone trying to avoid the massive screens of today’s smartphones.

Next are the specs under the hood, with a 800MHz processor and dedicated Adreno graphics chip providing some grunt, even if it can’t match the dual- or quad-core chips of the high-end smartphone.

There’s little memory in the Y100, with 256MB RAM, 512MB ROM, and just under 20MB of space for you to do anything with inside the handset, though a 2GB microSD card is included in the box.

Last year’s version of Google’s Android is present here, with 2.3 or “Gingerbread” the OS of choice. While that is by no means up-to-date, we’d be pretty hard pressed to argue that a $99 handset needs or would get the best use out of Android 4.0 “Ice Cream Sandwich.”

Over in the connectivity department, it’s all pretty standard fare, with WiFi 802.11 b/g/n and support for WiFi hotspot functionality, Bluetooth 2.1 with A2DP, GPS, and a reasonably slow 3G downlink with a maximum of 7.2Mbps.

A small notification LED sits on the top front of the handset, blinking different colours for when you have new messages or if the battery is charging.

On the front of the handset, you’ll find one main black squircle button acting as a home button, and three soft buttons serving up back, menu, and search. A volume rocket sits on the right side, while the power rests up top, just next to the only two ports on the handset: microUSB for charging and 3.5mm headset for listening.

The back is black plastic, though it's a lot less slippery than last year's budget handset from Huawei.

Last year’s $99 phone offered a surprisingly usable burst of performance without needing to spend much, so we’re hoping this year’s can do the same sort of thing.

For the most part, the Y100 feels like an upgrade to the IDEOS X1, Huawei’s el-cheapo handset from 2011.

The case still feels like cheap plastic, but at least this time, the black back almost has a matte rubberised feel to it, making it a lot easier to grip.

If you have small hands, the Y100’s small stature makes it very easy to hold, and the power button on the top offers an easy way to switch the phone on and check any messages or just use it as a lock. A weight of only 100 grams makes it very light and barely noticeable in the pocket, and even shares part of that product name.

Typing a message? There's virtually no room on screen with the massive keyboard Huawei has used.

That’s good, because reading anything on the screen will require you to zoom in with a gesture, as most text displayed at its standard resolution is rendered in a way that just looks pixelated.

For the most part, Huawei has tried to provide a decent experience with the Y100, sticking with an Android overlay with a 3D rotating square effect every time you swipe to one of five possible homescreens.

Your application dock can be moved around quite easily, and it now resembles one closer to that of the iPhone, complete with small icon reflections. Even the scrolling app menu reminds us of iOS, as you scroll from left to right, with circles guide circled indicators appearing at the bottom of the screen.

Text can look small and pixelated on the Y100, so you may want to zoom in to make it clearer.

Much like what we learned last year, you can make it look and feel more like an iPhone if you install a different Android overlay, like Espier.

Huawei’s choice of keyboard isn’t our favourite, and the overly large layout combined with the tiny screen makes for virtually no room when you’re typing. In fact, even with the large keys, you’ll often find yourself hitting the wrong letter, so we’d probably replace the on-screen keyboard with something else pronto.

Performance is a bit of a mixed bag with the Huawei Y100.

On the one hand, it’s cheap, so you probably don’t need to expect much grunt here. Playing Rovio’s uber-addictive “Angry Birds,” we had the title pause randomly and and even crash. Loading up the Google Play Store, we had a few slowdowns and longer wait times than we were used to, and there’s even some obvious performance issues with the keyboard, as it takes a second or two to appear on screen.

The screen is very responsive, especially for a $99 phone, and you'll see this when you swipe to and from each homescreen.

But then the performance surprises us, showing decent 3D graphics speed in “Fruit Ninja” and showing no lag when we’re doing basic things like swiping between the various homescreens, adding widgets, or searching through the menus.

In fact, Huawei has even taken out one of our performance indicators, with no live wallpaper support to be seen anywhere here, which is probably a wise move given how well they’d run on this limited hardware.

Memory is a touch limited, with less than 20 megabytes (yes, meg) available for you to use on the inside of the handset. There is a 2GB microSD in the box, and we’d suggest you throw that in immediately. Make sure to change the default installation path to the microSD in “application settings” otherwise you won’t have much room to download and install apps to from Google Play.

Huawei has been kind enough to include a camera in this handset, but we wouldn’t be throwing away that little compact of yours anytime soon, as this one is just plain terrible.

With a three megapixel resolution with no flash and VGA video, the camera module certainly hasn’t budged from last year, and it still produces pretty weak images. There’s still no auto-focus here, so we wouldn’t be relying on this as a replacement camera, not like we can with some of the high-end smartphones.

The microSD slot sits just underneath the SIM card slot, with the battery in front of both.

Battery performance is about average for the handset, with a rough life of a day if you’re not making phone calls the entire time, or chatting up friends over social networking and surfing the web.

Currently, the Huawei Y100 is exclusive (and locked) to Vodafone, but we wouldn’t be surprised to see this released to other carriers in the near future.

It’s hard to beat a handset for $99, and the Huawei Ascend Y100 could prove to be a decent smartphone for anyone after a cheap net-capable mobile handset, but it’s certainly not going to steal the crown from Apple’s iPhone or Samsung’s Galaxy S3 any time soon. 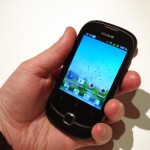 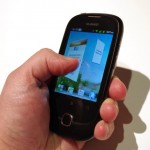 The screen is very responsive, especially for a $99 phone, and you’ll see this when you swipe to and from each homescreen. 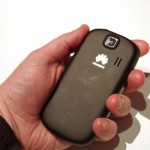 The back is black plastic, though it’s a lot less slippery than last year’s budget handset from Huawei. 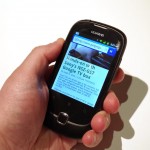 Text can look small and pixelated on the Y100, so you may want to zoom in to make it clearer. 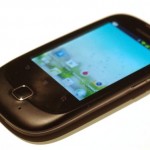 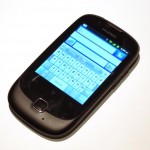 Typing a message? There’s virtually no room on screen with the massive keyboard Huawei has used. 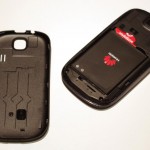 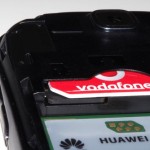 The microSD slot sits just underneath the SIM card slot, with the battery in front of both. 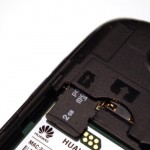