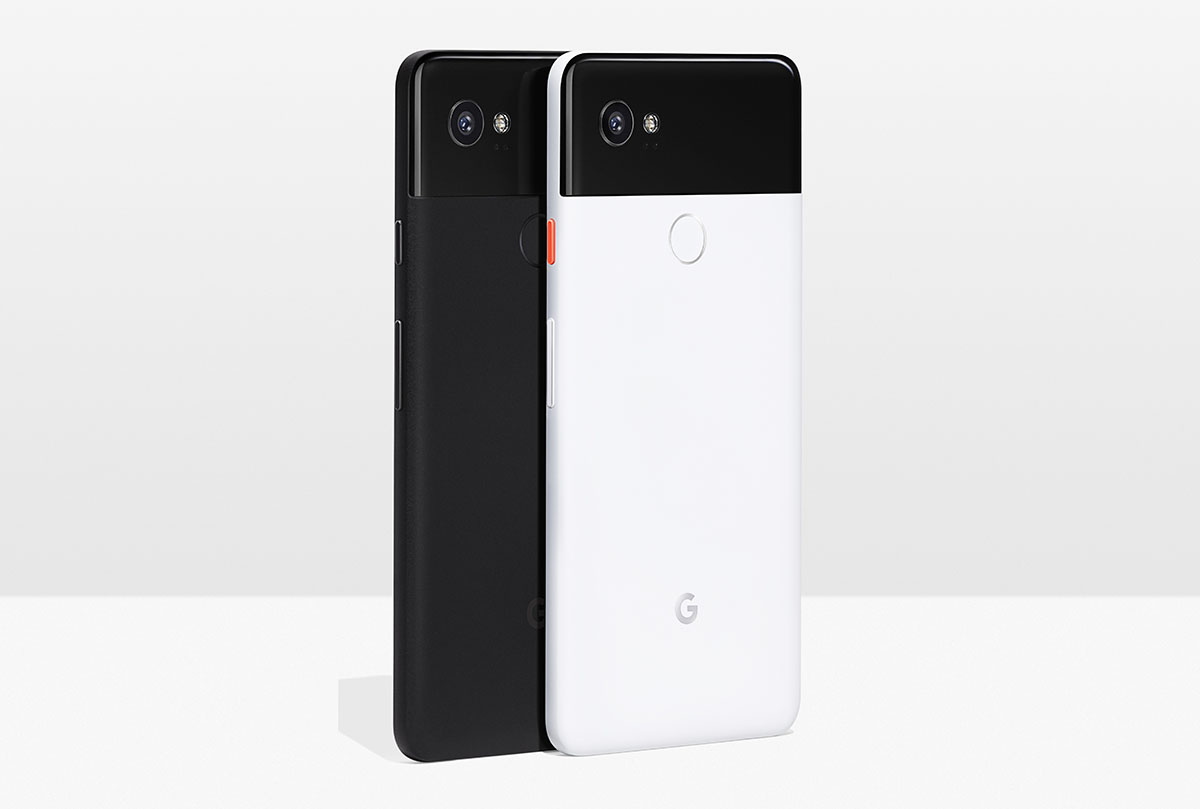 When Google launched its Pixel phones at the tail end of 2016, they were very well received. But time moves on, and I’ve lately been spending a little quality time with the Google Pixel 2 XL. How does it stack up?

Answer? Very well. But very well in ways that tend not to be all that obvious.

The phone has an “Active Edge”. Squeeze the bottom half and you can have it invoke Google Assistant, or stop the ringing, or both depending on context. That’s a seriously useful feature, but not an obvious one. The body features aluminium unibody construction, and the screen is covered with Corning Gorilla Glass 5. It’s IP67 rated, which means dust proof and should survive immersion of up to a metre for up to half an hour.

The glass curves neatly at the edges into the body, although no “edge” style display is provided. The corners of the display area are curved, hiding the pixels right in the extremities. At the back, the top one sixth or so is textured differently to the rest of the body, providing a distinctive and interesting appearance … if the phone isn’t in a case.

Underneath is the hottest processor around at the moment, the Qualcomm Snapdragon 835. The phone has 4GB of processing RAM. In terms of raw performance, the only phone I’ve tested which barely pips it on the Basemark OS II benchmark is the Sony Xperia XZ Premium, which managed 3540 compared to the Pixel 2 XL’s 3426. The Google phone is twenty per cent faster on this bench test than the Samsung Galaxy S7, which is no-one’s idea of a slow performer.

On the Basemark OS X games benchmark, the Pixel 2 XL was again slightly behind the Sony, and also the Huawei Mate 9, and around 7.5% faster than the S7.

Of course it runs the latest Android: Oreo 8.0. The review phone was fitted with 64GB of RAM for storage. It can be optioned up to 128GB for an additional $150. Disappointingly for those who like carrying plenty of media around with them, there is no provision for expanding storage.

This is not the slightest problem I imagine for most users. Especially as your purchase includes “Free, unlimited online storage for photos and videos taken with Pixel in Google Photos”. The footnote says that is for original quality for photos taken over the next three years, and “high quality” for subsequent photos and videos. You could imagine that amounting to many gigabytes for keen photographers and videographers.

But as a codger, I like to have lots of local storage for carrying my own music files, and somewhat resent having to rely on data transfers off site using bandwidth I have to pay for. Each to their own.

The phone supports, of course, all the fastest LTE and WiFi standards, including 2×2 MIMO for the 802.11ac WiFi. Bluetooth is 5.0 with low energy support. There’s NFC and eSIM – electronic SIM – built in*.

It connects physically via USB Type-C. Rather disappointingly, it does not appear to support external displays, something you may have noticed I’ve become quite keen on.

By “does not appear to support” I mean that I tried it out with both the Apple USB Type-C multiport adaptor and the new Belkin USB Type-C dock. Neither does it support Ethernet, but it does make use of USB storage, mouse and keyboard connections, and audio DACs.

Also missing is support for Miracast/WiDi. I know Google has its own Google Cast system, and I have several Chromecast devices in my office with which I was able to test it, but the lack of Miracast restricts very substantially the number of other display devices it can wirelessly cast to without additional expense.

The phone packs a 3250mAh battery with fast charging capability. Fifteen minutes of charge can give it seven hours of life.

Every Android phone seems to have a different way of being set up, at least if you’re transferring from another. The Pixel 2 provides for a new setup of course, or for copying from an iPhone or Android phone. I used the latter. To transfer there’s no NFC linking, no WiFi transfer. It’s all good old fashioned wiring.

The clear instructions on the Pixel 2 tell you to plug your normal cable into your old phone, and the other end into the USB Type-B to USB Type-C adaptor provided with the phone. This adaptor is useful for using with other devices later, such as standard USB storage or DACs.

Once I’d done that, there were a few confirmations required, and then apps and credentials started transferred. There were 104 apps, and the system promised a transfer time of 25 minutes, which is roughly what it took.

Left: Watch out, the standard transfer will copy your music over as well; Right: you have control over the squeeze function

Once it got that going, the phone suggested I continue setup. Again, some more permissions to grant and then the opportunity to set up Google Assistant. It was here that there was a small wrinkle because to set it up, I had to say “OK Google” three times. And that, of course, invoked Google Assistant on the phone from which the setup data was being transferred, with it wanting to know what I wanted. Happily I was able to cancel out of that without it upsetting the Google Assistant setup on the Pixel 2.

As the wired transfer came to an end, it soon became apparent that the apps themselves weren’t transferred. Instead they were being downloaded from the Play Store. Sensible, because that way it makes sure they’re up to date.

But, then, what was it that took 25 minutes? I checked “Storage” in settings, and it turned out that three quarters of the 64GB of storage on the Pixel 2 had been consumed, in large part thanks to 35GB of music which had been brought across from the old phone.

Throughout several weeks of use, the phone proved fast and effective. It initially puts virtually all app shortcuts into an app tray which you access by swiping up from the bottom of the screen, so you’ll probably want to spend a bit of time dragging apps to the various screens that make sense for you.

The squeeze function worked well, and felt designed in. That is, there was feedback in the form of a brief vibration. I think. It actually felt like the sides of the case were physically giving away a little with the squeeze, but I think that was just a psychological effect.

The fingerprint scanner is on the back, about three quarters of the way up from the bottom. It’s not my preferred location, especially when the phone has a case on, but even I got used to it. The notification bar worked in the conventional way and is editable so you can have half a dozen of your favourite shortcuts readily available.

Those involved in technology for a long time know that there are some aspects of performance which can be almost entirely determined by the specifications list. But even though the figures still have meaning, some things can’t be captured only by numbers. And so it seems to be with phone cameras.

And you’d be wrong. I suppose it’s the sensor and the software design, but as far as I’m concerned you can take your German-branded lenses and twin camera modules and clever processing to merge their images into one, and just give me the Pixel 2’s camera. Because it takes glorious photos. As good as smart phone cameras get, and noticeably, obviously better than most.

In regular use in good light and easy conditions, where even low cost phones can do a respectable job, you won’t notice the much difference. But in lower light where the wider aperture is supposed to be an advantage, the Pixel 2 is just brilliant.

It focuses fast, and holds focus even in my shaky hands. Resting against a convenient pole is all that’s required to get truly impressive night time shots, clean, with deep contrast and marked detail. This phone uses a camera that can capture detail in low light, not merely make it up.

Google has also included bit of a preview of a new feature that’s likely to roll out to other Android devices over time. It’s called Google Lens, and it in effect identifies things you take photos of, or extracts other useful information.

Let’s look at the second thing first. If you take a photo of something with writing, Google Lens will go off, examine the document and look for and interpret things like phone numbers and web URLs, and present them ready for you to use, share or store. That seemed to work very well indeed and I could see that as being extremely useful.

The object side of thing would seem to have great potential. But tat this stage, it is only potential. I wandered around Canberra’s Parliamentary Triangle this morning photographing buildings – The National Library of Australia, The High Court of Australia, The National Portrait Gallery, The Questacon National Science and Technology Centre and The Old Parliament House, plus several statues and sculptures in the area. Of all those, only one photo of one object was identified. That was a straight on shot of the front entrance of the Old Parliament House. But not the four or five angled shots of the same building, nor any of the others. Not even the Henry Moore sculpture.

I think the thing that surprised me most was that it seems unlikely that Google Lens didn’t seem to use the GPS information captured in the photos to narrow down the search.

I liked the Google Pixel 2 XL very much. Physically, it’s great to hold, it’s pleasing to the eye, the screen is delightful, and the camera is as good as it gets. I just would have hoped for more open communications capabilities from the USB Type-C port and with mirroring to TVs.

* eSIM is an anticipated replacement for the physical SIM. You’ll just switch providers or whatever by updating the phone’s built in SIM. But of course, existing SIMs are supported still.

Google Lens – I’m not yet convinced

What dog, cat, pet is that? Google Lens to the rescue