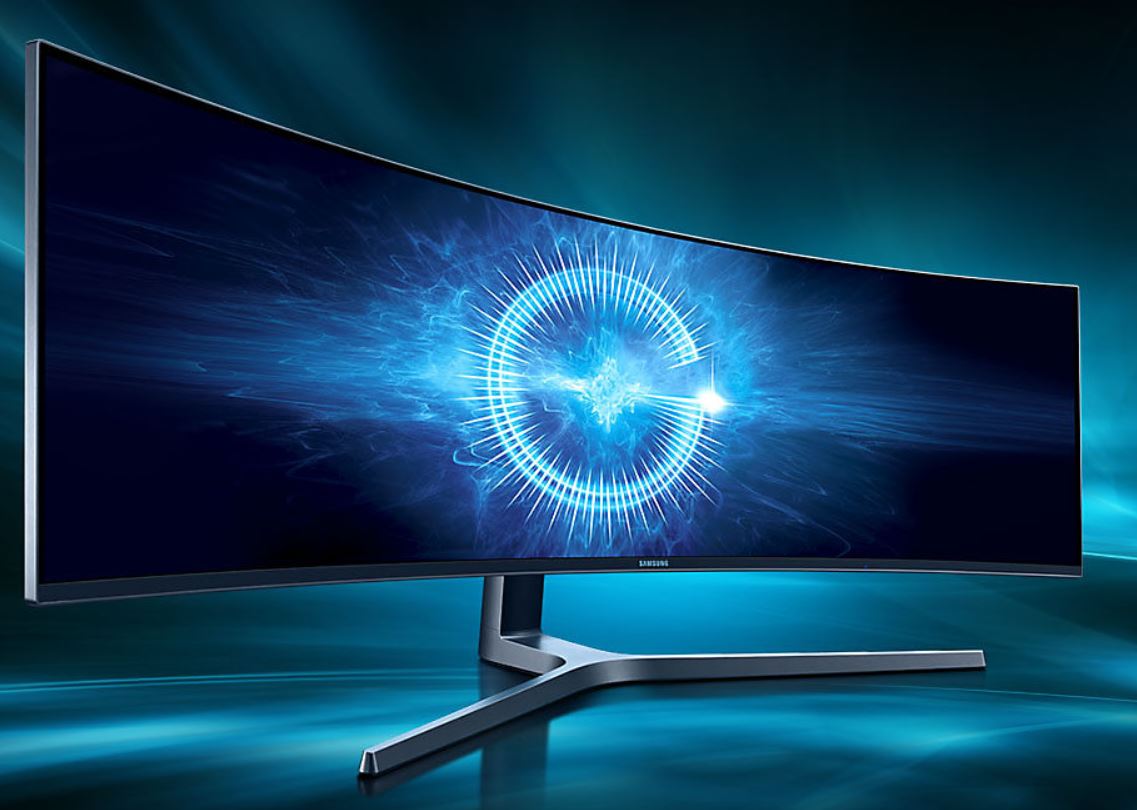 It is a tad over 1.2 metres wide, nearly a metre tall and weighs 15kg – its damned big. Samsung says it is perfect for gamers. Channel 7 Sunrise GadgetGuy and gamer Val Quinn concurs saying, “It is huge, huge I tell you! It is like sitting in front of the Pentagon ‘command and control centre’ where you can see everything.”

Back to reality – this is a A$2,499.95 monitor, and you need to know everything about it before you damage the credit card. Sorry, we need to get techy first.

When you look at it in that way it makes a lot of sense to have so much screen real estate to play with – perhaps place your game in 16:9 (one half) or 21:9 and use the other half for chat, statistics, live view, etc. Or an increasing number of games now support 32:9 format so use the whole screen and exercise your peripheral vision.

For example, you cannot watch a 16:9 format movie in widescreen as you won’t see half of it – it will display in 16:9 with black edges filling the rest of the screen.

It does not have speakers, but it does have a 3.5mm headphone jack to hear the audio signal from HDMI or DisplayPort.

It is a one-piece screen that requires careful unpacking and following the instructions to the letter. That means taking the stand out first, rolling the box on its side, attaching the stand and then tipping the box upright. Whew.

While 15kg is not too heavy to lift, it requires careful edge holding to avoid touching the screen.

The edges of the screen sit 30cm off the wall and the stand tips about 40cm. That means if you unusually sit about 60cm from the screen you need at least a metre-deep desk!

The curve is measured by radius (R). The lower the number, the tighter the curve.

For example, 1800R means if you were to put the monitors side-by-side they could form a perfect circle 3.6 metres in diameter. It also refers to the typical eye-to-screen distance of 1800mm (1.8m) to see a 180° arc.

A 49”, 1,800R curve puts you in the driver’s seat and is the tightest curve you can see edge to edge sitting around 600mm (arm’s length) from the screen.

What is better for gaming – curved or flat?

This is entirely a personal choice. Many Pro gamers say that curved screens focus or centre them (but they are mainly referring to 27-32” single 16:9/21:9 monitors), and games are rendered to be in pseudo 3D anyway – not flat 2D.

In business there can be issues with curved monitors displaying skewed grid lines – a curved Excel spreadsheet grid spread over 49” could be a little too much.

As a business user I really appreciated having four full-sized A4 pages open at once, or a half screen browser and two A4 pages etc., – that is real productivity.

QLED – quantum dot – is the technology that Samsung use in its premium LED TVs and monitors. QLED has no relation to OLED (organic light-emitting diodes) that self-emit light.

Bottom line – Samsung has tuned the QLED to deliver game levels of better colour and deeper blacks as well as HDR (high dynamic range) to add definition to dark areas and cut down flare from light areas. HDR only works with HDR enabled games and movie content.

The VA panel is capable of 144Hz refresh – you can also adjust it to 60/120Hz for older games. It supports AMD Radeon Freesync – we cannot verify if it supports Freesync 2 standard as stated on some websites.

1m/s MPRT (Moving Picture Response Time) is not the same as 1m/s GtG (grey-to-grey). Gamers say that MPRT is a more accurate representation of visible motion blur. In any case, human eyes cannot see below 25m/s.

Samsung says it uses an advanced “four-channel” impulsive scanning technology, which is more precise. It creates a cleaner visual experience by dividing the screen into four concurrent sections to remove motion blur more efficiently, and Samsung was the first to apply it to create a 1ms monitor.

Rear lighting (from here you connect the strand) creates a subtle blue glow that looks quite nice. Alternatively, if you want even more light, you can remove the plastic surround that partially obscures it.

Like other Samsung gaming monitors, it has a joystick accessing a dashboard style performance bar and segments on Game, Picture, System etc. Samsung calibrates each monitor at the factory and its best to leave custom settings alone.

There are three buttons on the bottom bezel to change presets.

Surprisingly good considering it is a 1080p vertical screen. We expected pixelation – there was none courtesy of the QLED panel. Visibility was good from all angles too.

Many games and movies now have HDR – but remember these are in 16:9 format, so you will have big back bars either side of the picture. There is an increasing number of 21:9 and 32:9 ratio games.

For business use too

There is also a Samsung app called Easy Setting Box to partition the screen into separate screens.

Perhaps the most interesting thing is to be able to use it with two separate computers each with 50% of the screen – cool.

My take is that business will prefer this monitor to two 27” screens – if you ignore price and have big desks.

What it has not got

We wondered if Samsung was actually serious in making a 49” wide monitor or was it something dreamed up for a world gaming Congress to gain more attention like the show-stealing 146” The Wall TV shown at CES 2018?

While Samsung do have a sense of humour (you need to living below North Korea) we initially could not see the point in 15kg, 32:9, albeit a superb performing monitor.

Then we started to warm to it as the equivalent of two 24” (Samsung says it is equivalent to 2 x 27”) and what that may do to games and office productivity.

If you’re a gamer, the CHG90 offers sheer immersive gameplay.

If you a business user think of it as two 27” monitors with one PC connection.

This is a top-quality monitor with a maximum real estate that would work for gamers, but we suspect it will find its way into business use where 1080p resolution is all you need.

If money is no object get one! I note that it is being offered at some computer stores at under $2,000 – bag a bargain, buy two!

It deserves 5 out of 5 for sheer technology and usefulness but being the first of its kind means it is expensive.