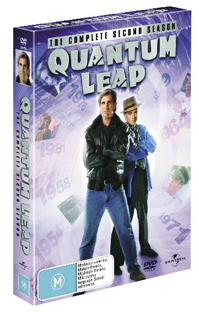 Scott Bakula returns in this sci-fi drama series which managed to generate a cult following during the early nineties. Season 2 of Quantum Leap features some of the best episodes on offer with Scott as the continually morally challenged Sam Beckett traveling from era to era, being thrown into unusual situations and being forced to help resolve what are often quite complex conundrums.

In this series Sam finds, courtesy of his weird time traveling, that he is thrust into the shoes of a newly married man, a woman who is trying to save her flat mate from suicide and a stunt man. The reason why Quantum Leap is always so appealing is Sam can literally find himself thrust into anyone?s shoes in any time period. The series has aged well as long as you accept that the original premise and Sam?s perpetual time travel is a load of bananas. Not a lot in the way of extra features on offer sadly. You do get a six-disc set for $69.95 though.