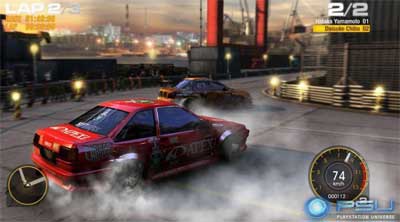 Codemasters have announced the launch of the Race Driver: GRID playable demo for home consoles. The demo is now available to download from Xbox LIVE Marketplace for the Xbox 360 and from the PlayStation Network for the PlayStation 3.

For the game that’s all about the race, the Race Driver: GRID playable demo delivers intense competition right from the off as gamers compete in single-player GRID World events, 12-player online races and then prove their worth in the white-knuckle Time Trial competition, which is home to the fastest lap challenge.

In addition to the Time Trial challenge, the Race Driver: GRID demo enables players to complete in a trio of GRID World racing showdowns. Take to the wheel of a Ford Mustang GT-R on the streets of San Francisco in the eBay Motors Muscle Cup; in Japan, compete in a Nissan S15 Silvia in the Advan Drift Trophy at Yokohama Docks, while the sweeping curves and hairpins of the Jarama circuit in Spain plays host to the Euro Touring Cars championship featuring BMW 320si touring cars.