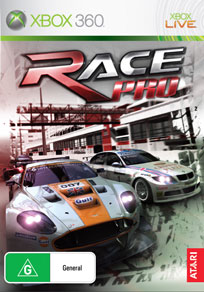 Race Pro, from simulation experts Simbin, is not a game for the casual race fan. It is, however, a fantastic replication of motor racing – most evident in both the driving physics and the engine notes -that conspire to really give you a feeling of being right there in the driving seat. It’s also very ugly. The game has dreadful ‘front end’ presentation, (the menus and so forth) the Spartan likes of which have not been seen since the Pro Evolution Soccer series, another of Atari’s wards, albeit actually from Konami.

Fortunately, the car and circuit models look considerably better – this is not your flash racing universe of Forza Motorsport or even that of the more-stylish-than-substantial GRiD – but with the gameplay Race Pro offers, you’ll be so focused on getting around the track as quickly as possible that it really wouldn’t matter if it were the best looking game in the world.

Featuring 13 real-life circuits and 350 cars from a wide range of different motor racing disciplines including the World Touring Car series and Formula 3000, Race Pro provides a very un-flash career mode, with your digital driver working his way up the ranks before he can get his grubby hands on the really good stuff.

Presentation is, to be polite, ‘minimal’, with the focus squarely on learning how to race a car, so gamers aspiring to live out their dreams of the Monaco champagne and yacht lifestyle through the game will be gutted to discover they need to do the hard yards first. Similarly, if you like a bit of a fanfare when you win a race, with luscious trophy girls flanking your character and the triggering of a rewarding video ‘cut scene’ for you to bask in, Race Pro will disappoint. The most you can hope for is a rather stilted ‘You won the race. Good job’ from the (former real-life driver) CEO of the company that developed this game, plus a few extra credits. But pretty close to what you’d experience in real life while you’re working your way up the motorsports ranks.

There are three difficultly levels for you to try: novice, semi-pro and pro. Professional difficulty is alarmingly accurate – and, frankly, will prove far too much to handle for most players – but learn the game on the medium setting and you’ll likely find yourself aspiring to the professional level later on – and dabbling with it using your whichever car class has proven to be your favourite as you unlock more of the game (ours is the Formula BMW!) Win a series of three races in any ‘contract’ and you unlock several more, usually with a decent choice of car type.

The racing aids are good – but you can’t change them during a ‘contract’, so if you start off at Professional and find the going really tough, the only way to go back and take advantage of some of the more useful aids such as traction control, is to re-start the whole contract. This is not a really big deal – and as the genuinely useful ‘Track Tips’ will tell you during loading times, each lap you do is a learning experience anyway.

And if you’ve read those boringly-presented but actually incredibly informative and useful driving tips during the loading screens, you’ll soon try to apply some of them and appreciate the wisdom that’s imparted. Once you’re comfortable with a car and track, you can go out again and really push your own capabilities and, when you do so, this is when Race Pro comes into its own. You have far more control over the vehicle than, say, in the game’s nearest competitor, GRiD from Codemasters, allowing you to eke out better performances by nailing the racing lines, braking that instant later, and really pummeling on the gas as you clear the apex of a corner.

If you can invest the time to become that involved in technique, Race Pro becomes brilliant. Your effort is rewarded – but in better lap times and won races, not virtual slaps on the back and pretty graphical sequences – and tiny things make a difference, like the subtle but superbly-judged force feedback through your controller when you’re really hard on the brakes and pulling the car around a corner with your teeth gritted. You’ll be ready to go online in the excellent – but a little bit broken, which Atari are fixing now – Multiplayer game mode in no time.

So Race Pro is aesthetically unpleasing and stripped down to the bare bones for a completely authentic racing driving experience. But then they did kind of flag that up in the name of the game, right? Genuine petrol heads will love it, but if you’re more into strutting your liveried stuff down the pit lane and swapping paint jobs with your mates online, this won’t appeal quite so much.