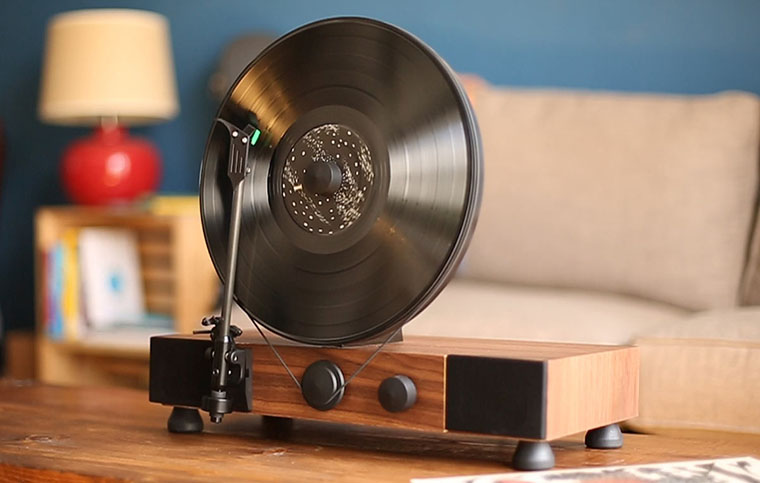 We talked about the fascinating Gramovox Floating Record Player a few weeks ago. Now it’s time to have a listen.

Just to recap quickly, unlike most record playing equipment, the vinyl disc is held vertically. Actually, a few degrees off the true vertical, but close enough. Now that I’ve got the actual player in hand, I can see that a knob about three centimetres in diameter screws onto the spindle over the centre of the record label to hold it in place. This has felt pad over the side that contacts the label so that should protect it from damage.

The tone arm is off to the left, with the cartridge actually reaching even further to the left than the main body of the unit when it’s at rest. It’s probably a little easier to operate for the left handed than righties like me. The tone arm has a cue lever by which the stylus can be “lowered” to the surface of the record. The two grams pressure required is applied by a spring rather than the gravity used by conventional players. I couldn’t check its accuracy because my stylus press gauge is a simple balance that requires gravity to work.

The spindle in the middle has two pulleys: one for 33 and 1/3 revolutions per minute for 12 inch LPs, and one for 45rpm for singles. You change speed by moving the silicon belt from one pulley to the other.

The one front control doubles as a power switch and a volume control. Around the back next to the line level outputs is a push button “mute” switch. This is for use when you’re using an external amp, quieting the internal speakers. Those speakers are 50mm, each with 15 watts of power available.

In so many ways, delicacy is the word that characterises vinyl playback. It is one description of the way the sound is delivered. It is also a characteristic of the playback equipment itself.

Unfortunately the twist tie securing the tone arm of the Gramovox Floating Record Player had become undone in transit and that would have left the tone arm flopping around. The stylus was protected by a cover but there was other damage. It turned out that the force had levered the pivot of the turntable a millimetre or two out of its housing. The business end of the tone arm was riding low and at a slight angle so that the arm lift couldn’t reach it at all towards the end of the record. Oh, and the stylus was jumping and a nasty overload noise was sounding.

I was only going to mention that as a footnote. But then I received the replacement, and this had clearly been used by someone before me (the original one looked to be straight from the factory, even if delivered via a bumpy road). I set it up quickly and found that the speakers crackled whenever I touched the tone arm. When I played something only the right channel worked. Whether using the player’s own speakers or an external amplifier and speakers.

To old time vinyl listeners, the crackling was a strong suggestion of what was going on. I had a play with the four tiny cables attached to the rear of the cartridge, and one slipped straight off. Somehow what was supposed to be a narrow tube to slide over the slim connector posts on the cartridge, with a split to allow a bit of adjustment, had become widely splayed. A moment’s very careful work with a pair of pliers straightened things up and the connector slide nicely onto the post.

No more crackles. Both channels working. Time to listen!

I mention all this because people new to vinyl may not understand some of the care that must be taken. A signal from a CD player typically has a peak level of two volts RMS. That makes the analogue signal quite robust. The output from a cartridge on a turn table is three orders of magnitude lower. Typically it’s around 2.5 millivolts – thousandths of a volt). Everything has to be working perfectly to avoid any problems.

So always keep in mind when using any record playing equipment the word delicacy and let it guide you.

Putting the Gramovox Floating Record Player together was the work of seconds. You pull the record player, which is almost completely assembled, out of the box. Undo the twist tie (which ought to be done up!), put the arm in the clip rest, slide off the stylus protector. Then you take the platter from the box, undo the spindle clamp to remove some foam protection. The extended platter spindle slides right into the bearing. Plug in the power pack and you’re right to go. No cartridge alignment, no stylus force setting. That’s all done at the factory.

Before we start listening, a couple of mechanical notes. There was no damping on cue lever – the little lever that lifts the stylus from or “lowers” it to the turntable surface. So you can’t just flick it down, but have to lower it gently to lower the stylus gently.

In addition, it didn’t look as though there was an anti-skating mechanism on the tonearm, although it was possible that there was one hidden in the base plate of the tonearm. Skating is an unfortunate consequence of physics. Two misaligned forces produce a resultant force in a different direction. In the case of a tone arm there’s a net force on the stylus approximately towards the centre of the record. Turntables typically have a spring or a string and weight to counteract this – the anti-skating mechanism.

To check, I used an ungrooved track on a test record and the stylus certainly flew towards the centre as though there weren’t one. That generally doesn’t result in obvious differences in sound, but can lead in the long run to earlier wear on the inner wall of the tracks.

As for listening, there were two obvious ways of doing that. The first was using the built in amplifier and speakers. The other was by plugging it into an amplifier and a fine pair of loudspeakers.

Once everything was working properly I started with the first. That proved to be a fairly midrangey experience. That is, not much bass, not much treble, and not very much detail. It went fairly loud without much distortion and the limited detail has the pleasant effect of masking much of the record noise, especially small clicks. I could imagine putting on an older pop record of the kind that I wouldn’t usually listen to closely while I’m doing some stuff around the house. Think of sound around about as good as delivered by a modern, moderately expensive TV.

Using a separate amplifier and speakers was an entirely different matter. I used a pair of quality compact speakers that sell for around $2500 a pair, ones with fine bass down to below 50 hertz.

And, wow, what a lot of fun this was. First, because the record player uses its own internal phono preamplifier, you don’t need special inputs on your amp. Just plug into any line level ones. The output level is quite a bit lower with most records than a typical CD player, but not so low as to cause any problems. You just turn the amp up a bit higher.

I pulled out a bunch of old albums that I haven’t played for decades and most were in pretty good condition, hardly degraded at all from how they were when I bought them brand new at the record shop. (To those of us who cared for our records, most of the clicks and noises were delivered straight from the factory!)

Golly, there were some gems in there. Sherbert’s 1977 album “Photoplay” with some remarkably sophisticated tracks, such as “Magazine Madonna”, came off very nicely, with a tight, well controlled bottom end, respectable stereo imaging and a fine overall balance. Hard to believe that nearly forty years have gone by.

The distributor supplied two shiny new LPs for me to test with it. One thing soon become evident: today’s LPs are little more pristine right out of the shrink wrap than they were forty years ago. All four sides (they were two double albums) had their fair share of clicks and ticks, while at least one section had a good level of background noise in the right hand channel.

Nonetheless, played on the Gramovox Floating Record Player (through real speakers) there was a real, rounded immediacy to Laura Marling’s voice on the album “Short Movie”. Sometimes the microphone she uses can add a bit sibilant bite to the music that isn’t always comfortable. This pressing (another name for a vinyl LP) on this record player kept that well under control. The dynamics of the acoustic percussion on “Strange” were bold and impressive and seemingly uncompressed, and the kick drum on “Don’t Let Me Bring You Down” was full and clean. The slowish tempo of the songs would have disclosed any speed variations in the turntable section, but if there were any, they were low enough in degree to remain undetectable to this listener, and I’m pretty sensitive to the phenomenon.

With the far more electric “1999” by Prince – remember, a new pressing – the delivery was very driving, rhythmically strong and balanced in tone. The turntable kept everything clear and coherent on what is at times rather more complex sound.

While I was using a test disk to check out the anti-tracking situation, I played a couple of test tracks which demonstrated that the ability of the cartridge and stylus to keep their composure in highly modulated tracks at both bass and treble frequencies.

The Gramovox Floating Record Player was a lot of fun, convenient for playing a quick song or side on its own, and rather decent sounding when used with high quality audio gear. Check it out.