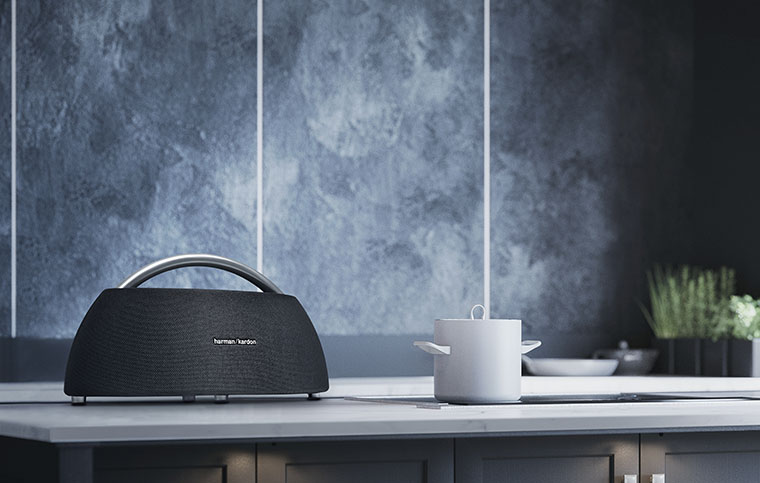 Almost ten years ago one of the most prestigious English high fidelity loudspeaker makers did the then unthinkable: it produced a compact, stylish, loudspeaker specifically designed for use with iPods, as evidenced by the built in iPod dock. Aside from anything else, it showed that the limitations to the sound quality from iPods were not so much the iPods, nor the music files they contained, but the speakers that had been used to play them.

Since then the hard disk descendent of the original iPod has disappeared and Bluetooth as taken over from the dock as the delivery mechanism. That original design has evolved, of course, and all manner of prestigious hifi brands have joined in.

Including Harman Kardon (generally styled by the company as Harman/Kardon). Establishing 64 years ago, the company has an astonishing record of firsts. These days its parent company, Harman International Industries, owns all manner of famous brands and has itself recently been acquired by Samsung.

This is a stylish and fairly large portable Bluetooth speaker. Portable because it has within in a 22.2Wh battery so it need not be tethered to a power point. Bluetooth because, well, it supports Bluetooth version 4.1.

As far as I can work out, the Bluetooth audio support is limited to the standard SBC audio codec, not the higher performance aptX or AAC ones (aptX is supported by many higher end Android phones and AAC by many iOS devices).* It also has a 3.5mm analogue input, so you can plug in any audio device which doesn’t happen to support Bluetooth (or just something that you want to connect temporarily without going to the trouble of pairing it).

By fairly large, I mean a decent 418mm wide, 212mm tall and 192mm deep, and it weighs something close to 3.5 kilograms. It looks a little like a flattened segment from the top of an egg, except that the very top has been replaced by a curved, brushed metal bar that acts as a carry handle. The main body is available in black or white.

Contained inside are two 90mm bass drivers and two 20mm tweeters. Each of the four drivers has its own individual 25 watt amplifier. That’s 25 watts when the power is plugged in. The output is apparently reduced when on battery to, of course, increase battery life. What it’s reduced to isn’t stated.

Which is rated at up to eight hours, with appropriate caveats about usage. Charge time is rated at three hours.

In addition to accepting music streaming, the unit can pair with a phone for hands free operation, with twin microphones and processing to eliminate background noise.

Harman Kardon says that signal to noise ratio is 80 decibels, A-weighted (ie. noise is effectively inaudible), while the frequency response runs from 50 hertz to 20,000 hertz at -6dB (that’s one of the output levels which are traditionally considered to define audibility).

The Bluetooth connection was extremely solid. I normally have a Bluetooth speaker paired with my Surface Pro 4, and for reasons which have always been unclear, the connection would last sometimes for a couple of days, or sometimes for a few hours, but always eventually fail. That is, the devices would remain paired, but would be disconnect. Depending on the device – or on the time of day or the whim of the gods – I’d have to do something like cycle through the inputs back to Bluetooth, or click connect again on the computer to re-establish the connection.

But not with this one. It remained connected. I took the Surface Pro 4 away for a week, came back and the connection was re-established automatically. Not once did it fall out.

One odd aspect of the unit was that it seemed rather prone to having its analogue input easily overloaded. I used one of my standard gadgets to provide analogue audio from my network and plugged it into the input. Weirdly, there was a marked crackling noise with one of my test tones. I was plugging it into this and that other thing to narrow down the cause of the problem, and everything was working fine, except for this speaker.

This source device – which I use for everything – normally has a fixed output level, but I worked out how to make it variable and turned it down and, voilà, fixed! Do beware, though, the input is likely to overload from the output of a standard CD deck. It also means that any interference on the connection is going to be amplified more than normal, since you have to turn up the unit’s own volume control to a higher level than otherwise.

(Why, you might ask, did I even bother doing that? I do most of my critical listening using the best connection system available, along with all my formal measurements. It’s usually best to get the Bluetooth connection out of the equation.)

That sorted out, I had to say I was extremely impressed. It’s silly to talk about “no compromise sound” in a device like this. Of course compromises must be made. I liked the choices made in those compromises.

The overall sound had a slight sense of mellowness, adding a feeling of distance which made the speaker seem bigger than it was, and as though it were two physically separate stereo speakers, perhaps a metre or a metre and a half apart, rather than one fairly large single unit.

It delivered excellent impact. Drums were delivered strongly, without the much of the dynamic compression that is often a hallmark of smaller speakers. The upper bass was nicely in balance, rather than overblown. Harman Kardon could do that because the mid bass was also there. Impressively there. The output was pretty much even until around 55 hertz, and while it fell away rapidly below that, there was usable output down to about 48 hertz.

You will not find many speakers of this size able to pull off a feat like that.

That means that there’s not much of the fundamental impact from a kick drum, but most of the bass guitar in a rock track is fully delivered.

So it produced very solid sound. And fairly smooth sound with softer material. But when I wanted it to, it went to fairly room filling levels with little distortion.

The sound via Bluetooth was effectively identical. While sounding fine, the speaker doesn’t offer quite the transparency required to reveal the reduced fidelity of Bluetooth. Along with the reliability of the connection, the sound made this is a highly enjoyable Bluetooth speaker.

There’s no formal input selection switch. The unit operates on Bluetooth, even if something’s plugged into the auxiliary input, until it senses an actual signal at the input, and then it switches to that input.

As for switching back to Bluetooth, that proved a little difficult. The instructions weren’t helpful. In the end, I settled on stopping the external input (pulling the plug didn’t help), switching off the speaker and then switching it back on. After winding up its various components it would reconnect via Bluetooth.

The battery life during playback depends, as the specifications say, on how loud you’re going to play it. I typically got five or six hours, but then I’m not necessarily all that considerate to the neighbours.

Obviously there are plenty of cheaper Bluetooth speakers around, but if you have a little space and are after premium sound quality, you won’t go wrong with the Harman Kardon Go+Play portable Bluetooth speaker.

* <Rant mode>The specifications do talk about things like A2DP (Advanced Audio Distribution Profile), AVRCP (Audio/Video Remote Control Profile) and HFP (Hands Free Profile), which is kind of pointless. A2DP is used in any Bluetooth equipment which has any pretensions to providing listenable stereo sound. It’s like saying a car conforms to the standard requiring the presence of a steering wheel and control pedals. Ho hum.

I’m being unkind. Lots of equipment makers do exactly the same thing. I wish that instead they’d talk about things relevant to sound quality which might distinguish one product from the next.</Rant mode>