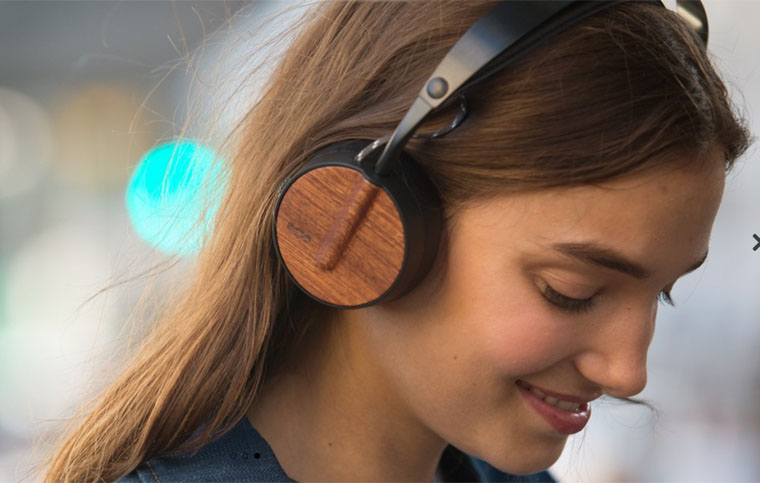 A while back we looked at a House of Marley Bluetooth speaker and found an interesting and fun mixture of respectable sound and attractive, natural styling. So it probably isn’t surprising that the House of Marley Buffalo Soldier headphones shares the same attributes.

For example, the headphones feature construction from some recycled materials (and especially the packaging) and have back plates made of Forest Stewardship Council certified timbers. I don’t know whether there are any net environmental advantages to it, but the cables are all fibre wrapped, like old-fashioned telephone cords, rather than coated in plastic. That’s not just the cable connecting the two earpieces together, but also the signal cable and the USB charging cable.

Inside the earpieces are 40mm drivers, the Bluetooth receiver and an amplifier. The cable connection, if you want to use it, employs a standard 3.5mm socket so you aren’t bound to use the supplied cable. The supplied cable has a single-button inline control. At just over 1.3 metres, it was a perfect length for portable use.

House of Marley mentions that the headphone use “Bluetooth 4 with A2DP stereo audio”, which is standard boilerplate since that applies to virtually all current model Bluetooth headphones. What it doesn’t say is which codecs are supported, so I’ll have to assume that it’s only the basic SBC codec. Decent enough, but not quite the quality of AAC or aptX.

There are two controls on the right earpiece: a power button and the edge of a rotating volume control which can also be pressed in to perform other functions. The 3.5mm socket is on the right earpiece while the MicroUSB charging socket is on the left. They take around two and a half hours to charge up, and are good for up to sixteen hours of playback.

They come with a soft “stash” bag (as House of Marley calls it) for holding the headphones.

The headphones were very comfortable to wear, in part thanks to the softly padded on-ear sections. But also in part to a fine balance in the springiness of black, stainless steel headband (there’s an inner section that’s cloth, so the metal isn’t resting on your head) so that it held firmly, but not so much as to make ears feel oppressed.

I’m very fussy about headphones. I dislike overblown bass, and I really hate peaky treble. But these headphones? I really enjoyed them. There was a nicely naturalistic sound, generally very well balanced across the frequency bands, although with an overall mellow character. That’s not to say they were lacking detail. Nothing was missing, it was just that everything was controlled.

If I really wanted to listen critically to hear the very finest detail in sources then I’d probably choose a much more expensive set of headphones. But for $200? You aren’t going to find significantly better sound.

Honouring Bob Marley, as this brand obviously does, there was no skimping on the bass. But equally it was reasonably well controlled, and very balanced. The very deep and extended bass in the opening strains of ‘Pray You Catch Me’ from Beyoncé’s newish album Lemonade was extremely exciting, and showed off just what they could do.

Of course I simply had to listen to Marley’s own Buffalo Soldier (in 24 bit, 96kHz format, no less) from the Legend Blu-ray. The bass guitar was solid and very well articulated, with the repeated descending phrase cleanly delivered. The rhythm, vitally important in Reggae of course, was well controlled and nicely dynamic.

Darker music – Faith by The Cure – was especially enjoyable with the solid bass and controlled mids and treble.

Fed by cable, the headphones were quite sensitive – where to be clear, “sensitive” means efficient at the turning electrical signals into sound. Using the dinky analogue converter on an iPhone 7 Plus, extremely high levels of sound were available.

Likewise on an iPod Nano. Even a few notches down from the maximum the levels could be earpounding, so it ought to work okay even with the low output produced by some Android phones.

Using Bluetooth, the maximum levels are considerably lower. Running the iPhone Nano at the highest level setting and with the headphone’s own volume control at maximum, the levels were somewhere between not quite loud enough, and nicely loud, depending on the intrinsic level of the track. The situation was the same with an iPhone 7 Plus. I would have liked a bit more gain on that side of things.

The only limitation, really, was due in part to the comfortable, warm sound. There’s the temptation to push the volume up too high simply because the sound is so easy on the ear, and at very high levels (fed by cable), especially when there’s a lot of bass, the volume limits to the headphones start to become apparent with a bit of harshness creeping into the sound.

The two modes are quite separate. The built in amplifier and Bluetooth connection only work when the headphones aren’t plugged in. No amp means the volume control doesn’t do anything when connected by cable.

The in-line remote on the headphones performs the usual pause/play and track skip and fast forwards and reverse functions by means of multiple taps and holds as you’d expect. It’s easy to use, thanks to the little button being spring loaded to only a moderate degree of firmness. Likewise, you use this for hands free phone answering and hanging up.

In Bluetooth mode, the volume control – you rotate it for that function – doubles as play/pause and phone answer/hang-up when pressed. However it doesn’t offer any of the double tap or hold functions.

The separate power button is implemented in a way that I took a bit of getting used to. And working it out wasn’t helped by the horrible instructions – a few square centimetres of pictures, not all of which were entirely understandable. Basically, to switch it on you have to hold in the power button for five seconds, which seems like a long time. A tone sounds so that you know. When you switch on it will automatically reconnect to whichever Bluetooth device it was connected to last time.

Switching off also requires holding the power button for five seconds. But don’t be fooled, you want the second tone, not the first one which sounds after three seconds. That one means the headphones are ready for pairing.

Also, be careful not to accidentally double tap the power button. That got the blue-red alternating lights going as though it were in pairing mode, but in fact it wouldn’t connect any more, even after switching off. The only way to get it to connect to the iPod Nano again was to get the Nano to “Forget This Device” and then re-pair.

As it happened, the headphones seemed to switch themselves off automatically after not receiving music from the iPod Nano for a while.

The House of Marley Buffalo Soldier Bluetooth headphones are stylish, the sound good, and are a great deal of fun. They are most certainly worth a listen.