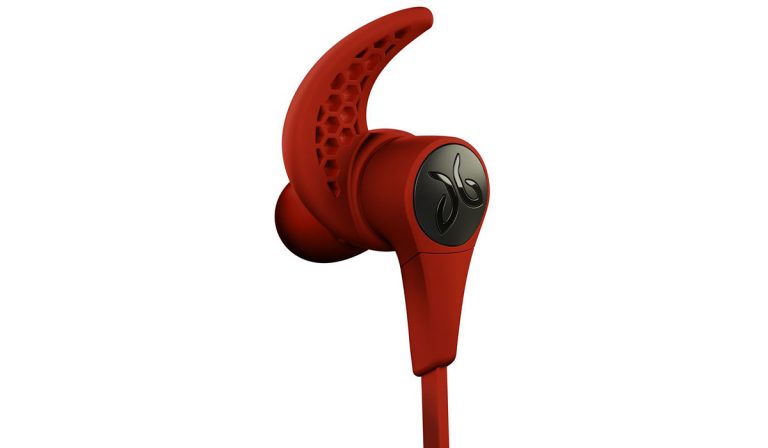 With so many Bluetooth earphones around, how does one differentiate itself from the others? Why, with an app of course! I didn’t realise it at first, and had started writing up these rather pleasing earphones on the basis of their sound alone. But a press release at just the right time reminded me of the app. So I had the iPod Nano forget them, fired up the Android version of the app, and discovered an even better experience.

First, though, the basics. The Jaybird X3 earphones follow one of the conventional layouts: light weight silicon-tipped earbuds joined by a short length of cable – 490mm in this case – with a control pod near one end.

The buds themselves are metal and feel nicely solid. As they emerged from the box, they were fitted with the middle of three sizes of silicon tips, along with wings (called “fins” by Jaybird).

The factory fitted bits proved to be not very satisfactory in my ears. The attached wings – which can help lock things in place using various protrusions in exterior ear – did a decent job of keeping them in place, but it was the wrong place.  They tended to drag the earpieces out of my ear canals by a small amount, breaking the seal upon which decent bass depends so much.

But the Jaybird X3 earphones come with three sizes of wings, three sizes of silicon tips, and three sizes of “Comply Isolation Foam Ear Tips”. These use a kind of memory foam which can conform to the size of the ear hole you’re pushing them into. I used the largest size of those for a couple of days, sans wings, and found that they had a bit too much memory for my taste. I could jam then in and get a very good seal, but they’d inevitably loosen somewhat within twenty minutes, requiring another firm jamming in.

Then I spent a couple of days with silicon tips – the largest of the three sizes supplied – and no wings. They provided a great combination of in-ear security and good seal for the best sound. After that I went back to the memory foam tips, the middle size this time. They also did the job very nicely, and were better in one respect. But I’ll get to that later.

The battery is rated at eight hours of play time and two hundred hours standby. The earphones have 6mm drivers and up to five milliwatts of nominal power output. They support the standard Bluetooth music SBC codec, the Apple-friendly AAC codec, and something called “Modified SBC”. I have no idea what that means, and a very quick Google helped not at all. A codec can be modified or customised in two ways. One involves leaving the coded signal compatible with the standard decoding devices. The other is in effect a different codec requiring a compatible decoder. Your guess on which “Modified” SBC might be is as good as mine.

And then there’s the app. The Jaybird MySound App is available for iOS and Android. This can manage pairing, allow EQing of the sound, and provides hooks into recommended Spotify playlists.

The first thing I do with earphones is unpack them and plug in their Micro-B USB socket to get them charged up. What is usually a fiddly affair was, with these, a genuine pleasure. First the packaging is so well designed that the hardest part of unpacking them was pulling up one sticky tab. The box unfolded neatly and logically. I pulled out the earphones, the instructions and the carry pouch (which was well packed with what I assumed to be ear tips), and then folded the box neatly back up.

The second thing was charging. I started looking for the Micro-B USB socket, hoping that the waterproof cover over it wouldn’t be too difficult to take off. I ran the whole thing through my fingers for close inspection twice, and couldn’t find the socket. And then I realised that what I had assumed to be decorative gold dots were contacts. Sure enough, opening the pouch revealed a USB adaptor. No fiddling with those damned Micro-B USB connections every time it needed a charge!

This consists of a tiny cradle and a very short USB-A to Micro-B USB cable. You can unplug the latter and connect using a longer cable if you have one. And you can just leave it plugged in, ready to snap the earphones in any time. A bright red LED lets you know that the charge is underway. In less than an hour, it had changed to green.

(The specifications say it takes two and a half hours to charge, so maybe it was already partly charged.)

The Jaybird X3 earphones were easy to use, with a very perky female voice keep you apprised of what’s going on. “Earphones connected!” she announces. “Sixty percent battery!” she informs. You can almost hear the exclamation marks. There are three buttons on the control pod, along with a tiny microphone for hands free use. The centre button does the play/pause/on and off (by holding)/pairing (by holding longer)/answer/hang up thing. The volume buttons (increase is, properly, on the end closer to the earphone) double when held to skip tracks. They were all easy to identify by touch, and positive in operation.

The sound produced by these earphones was surprising. Surprising because they were in the top tier for quality. They avoided the excessive brightness that seems to go with the territory, keeping an even tonal balance that made for a relaxing listen. But while doing so, they retained plenty of detail.

This job that people like me do does have one negative aspect: we get into it because we love music and movies and playing with gadgets, and then spend most of our time listening and looking for defects, rather than sitting back and enjoying. But with several tracks the music broke through and I forgot all about the earphones, and I just enjoyed the music itself.

Until I brushed the connecting cable. It tends to transmit the sound things touching or hitting the cable more powerfully into the earphones than most. Can’t get away from listening for defects! That said, when I switched from silicon to the middle-size Comfort tips, that reduced significantly to normal levels.

A “tie clip” is provide with the earphones. This can also help a lot by securing the middle of the cable.

The MySound App did a neat job on the EQ front. The presets were pretty sensible for the most part, and you can create your own custom EQ presets by dragging around five control dots. These seem to act on the EQ curve in a similar way to Bézier curve handles in a graphics program. The EQ curve applies to whatever is playing, not just Spotify. I used a DLNA app to play music from my network attached storage.

Question: does the EQ process the sound from your phone before sending it to the earphones? No, the EQ is happening in the earphones themselves. The app is just a controller.

You see, the earphones can pair to two devices at once – although it can only play audio from one of them at a time. So I had them playing music from my iPod Nano while they were paired with the MySound App on my Android phone. I could adjust the EQ in the app and the sound would change. Then I could switch off Bluetooth in the phone, forcing it to disconnect, and the sound remained the same through the earphones.

So you can apparently set up the earphones to a particular preferred EQ permanently if you wish.

Finally, the connectivity of the earphones was very good. It was generally okay for up to fifteen metres, with the weakest direction being directly to the rear of the listener. It did not mind into which pocket the iPod Nano was inserted. It maintained a perfect connection even when I cupped the Nano closely in my hands. It provided very impressive stability.

The Jaybird X3 earphones provide very good sound even with the default “Flat” EQ curve. With the ability to customise that you any individual tastes – permanently! – and with plenty of volume available and a solid Bluetooth connection, these are definitely amongst my favourites.