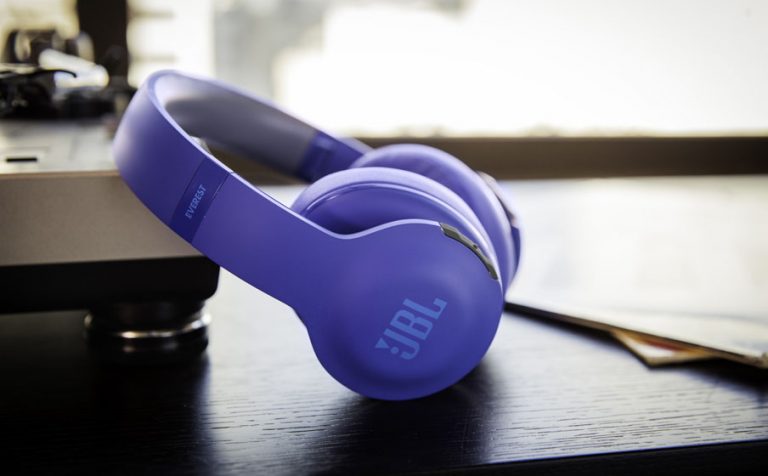 JBL hasn’t been in the music equipment business forever. Only 71 years. But its founder James B Lansing (yes, the same Lansing who started the firm which eventually became Altec Lansing) was involved in building loudspeakers for cinemas long before he started JBL, way back in the early days of the “talkies”.

What I have on my head right now are not JBL speakers though, but JBL headphones. Specifically, JBL Everest 700 Bluetooth headphones.

Priced at nearly $300, these are not cheapies. But, heh, JBL! They come with some top notch specifications: a frequency response of 10 hertz to 22,000 hertz, a maximum output sound pressure level of a literally deafening 117 decibels. They use 40mm drivers in both ear pieces and pack an 850mAh, 3.7 volt Lithium Ion battery (charged via a Micro-B USB socket).

JBL says that the “Music play time” is “up to” an astonishing twenty five hours.

The headphones also have a microphone and can do hands free phone duty with iPhones and Android phones.

They are closed-back models – the rears of the earcups are sealed – and their soft pads surround the ears rather than sitting on top. There’s a reasonable amount of pressure on the head, keeping them secure when you’re on the move. But I’ve just been wearing them the last three hours and am not finding them at all uncomfortable.

On the right earcup is the button for power and pairing, and another which allows connection of an additional set of Bluetooth headphones – not necessarily JBL ones – for listening to the same source. JBL calls this its “ShareMe 2.0” feature. On the left earcup are the volume up and down keys and play/pause.

A cable is provided so that you can use the headphones even if the battery runs down (so long as your device has an actual, you know, headphone output).

The JBL Everest 700 headphones fold up into a reasonably compact space. No pouch or travel case is provided. You do get a charging cable and audio cable. The latter has only a 3.5mm socket on its end. No 3.5mm to 6.5mm adaptor is provided for connecting to grown-up amplifiers.

They are available in black, grey, “titanium” and – the review ones – a bold blue, just a little short of an electric blue.

Let’s first dispose of the things I didn’t like. Okay, make that the thing I didn’t like. That thing was the “ShareMe 2.0” feature. Okay, not so much the feature as the button for invoking it. In the two weeks or so I was using these headphones, I’d estimate I accidentally pressed it a thousand times. Okay, realistically, about thirty times.

The feature is interesting and I can imagine people who’d like to use it. But, damn, having a button in a prominent place where I’d press it every time I removed the headphones from my head – except for those few times when I remembered and carefully placed my hands so as to avoid it – was not a good design decision. Nor was making it work with a simple, single touch. How about having to hold it in for a second or two to make it work?

You see, if you do press the button – and I even managed to do it accidentally even when not removing the headphones – the music stops and a lady speaks into your ears giving you instructions about connecting a second set of headphones. To get the music going again you have to press the button again (which, remember, is on the right earcup) and then press the play/pause button (on the left earcup).

Well, that’s it. That’s the one thing I didn’t like. I’d willingly learn to live with it, given how really good these headphones on all the important other things. The purist in me would have liked aptX and AAC support, but they sounded so very good that I didn’t really notice.

The sound they produce is more like that you’d hope for from a set of high end audiophile headphones. They are tonally very well balanced, and musically extremely natural. The bass was strong – although not unduly emphasised – and extended. A little Bach organ music played on a mighty theatre organ really had my head buzzing with lots of 16 hertz pedal and its 32 hertz overtones. The bass guitar on Cake’s Fashion Nugget was powerful and at least as clean as I’ve ever heard it, while the vocalist sounded utterly natural.

These were very revealing headphones, able to provide great detail in the sound. I’ve just spent a few minutes switching between my usual $700 wired headphones, plugged into a $2000 headphone amplifier and DAC, playing music encoded in lossless FLAC format, and these headphones wirelessly fed the same music encoded to MP3 format by an iPod Nano. And I’m not absolutely certain I prefer the former.

Bluetooth connectivity was good, with a decent range beyond twenty metres, and good reliability with the iPod Nano in just about any pocket. The only connection difficulties were due to me clutching the Nano in my fist when I put my hands in my pockets while walking out doors, trying to protect them from the cold.

They switch themselves off after a few minutes without music. The volume buttons worked effectively. So did the play/pause button, if a little oddly. There was a longer pause between pressing it and the music pausing or playing than is normal for Bluetooth headphones. It was probably only half a second longer, but it did have me feeling less certain of its effectiveness that was really warranted.

Now what about that battery life? Is twenty five hours an optimistic claim?

You see, as I’m sitting here tonight writing this, listening to music with these very headphones, I’m still waiting. I’m still waiting for the battery to expire. I charged them up on receipt – some fourteen days ago. Since then I’ve undoubtedly spent at least fifteen hours walking the dog with them on, plus doing some housework, or other strolling, or just lazing around listening. I’m guessing at least twenty hours in total. For the past week whenever I’ve embarked on another walk with my master, the dog, I’ve tucked a backup set of earbuds in my pocket in anticipation of the battery in these headphones expiring.

But it hasn’t. As I said, I’m listening right now (Laura Marling, sounding as smooth and luscious as ever) and still there’s no hint they’re going to run down.

So, twenty five hours? Who knows? What I can say is that they go for way longer than I’d have expected. Unless you live in your headphones, you’re likely going to romp it in with weekly recharges.

Unfortunately it is time to take the JBL Everest 700 headphones from my head, switch them off and pack them away for they must go back tomorrow, the review period having finished. I shall miss them. And I shall never know how long that seemingly inexhaustible battery lasts.