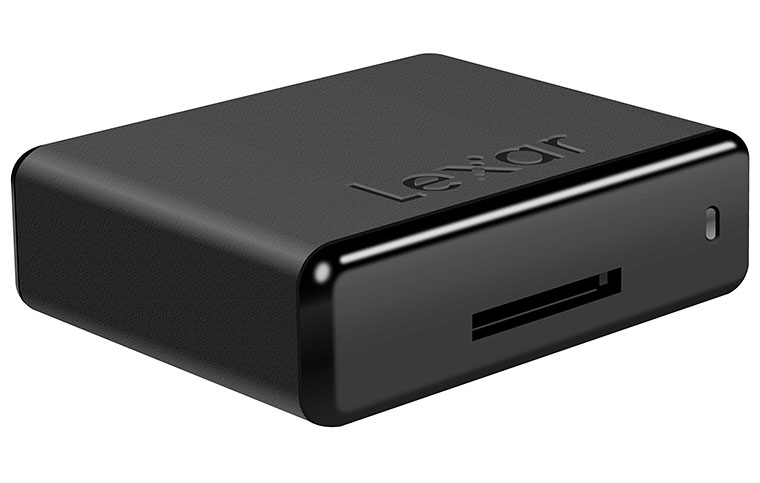 A few weeks ago I was copying yet another bunch of photos from an SD card into my computer, watching the Windows copy progress graph as – chug, chug, chug – the megabytes slowly transferred. And I realised that I was using old technology. Maybe, I thought, things have gotten faster in recent years. Turns out they have. I asked Lexar, a company best known for memory cards and USB thumb drives, whether it might be able to make things faster. And indeed it could.

Actually, Lexar has lots of these kinds of gadgets, but in this mini review I’ll be looking at just one: the Lexar Professional Workflow SR2 SD card reader. This is a rather small USB 3.0 device. It measures 75mm wide, 60mm deep and 22mm tall and weighs 49 grams. The measurements are precise because in addition to working as a standalone card reader, it can slot into the HR1 four-bay card reader. You can put four of the SR2s in there, or some mixture including readers for microSD cards, USB thumb drives, Compact Flash cards, XQD cards and CFast cards. Looks like a great gadget for anyone who needs to pour lots of data into a computer on a regular basis.

But here I’m looking at the SR2 alone. On one side it has a slot for an SD card. On the other it has a full sized Type-B USB 3.0 connection. That’s the one which the traditional squarish shape, but with a rectangular bit with additional contacts piggybacked on top.

Now that’s all that there appears to be special about it. But it turns out that it also supports the UHS-II SD card bus. You can read all about what that means in our SD Card Primer, but in brief, this is an enhanced SD card format that supports much higher speed transfers, thanks to an extra row of eight contacts on the card (plus internal architecture changes of course). UHS-II cards are backwards compatible with normal SDHC and SDXC card readers, and of course UHS-II card readers work with earlier forms of SD cards.

Devices which use UHS-II SD are still fairly rare, but I see that Panasonic’s new DMC-GH5 high end camera – which supports Ultra HD video at 60 frames per second and, with a firmware upgrade later this year, an encoding bitrate of 400Mbps* – is one of the new breed which does.

At least, they’re supposed to. So of course I checked the Lexar SR2. And, yes, of course it did. In fact, it also supported reading and writing all the SD cards I tried, and also the single MMC card I had in my possession.

I tested with four cards and used for comparison an old SanDisk card reader that used to come bundled with SanDisk SDHC cards years ago when they first came out (since then existing card readers were largely incompatible with SDHC).

The first card was a 64MB MMC card which I suspect to be perhaps fifteen years old. Note, that’s 64 megabytes, not gigabytes. I could only fit eight photos on it for this test!

The second, a 2GB Panasonic SD card of Speed Class C4 which as described  means a write speed of at least 4MB/s. This card had some Panasonic press releases from 2012 on it, so I take it that’s from when it hails.

The third, a Transcend brand 64GB SDXC card of Speed Class C10, UHS Speed Class U3 with UHS-I bus which I purchased in 2015 for use in my Panasonic Lumix DMC-GH4 camera.

Finally, the fourth is a brand new Lexar Professional 32GB SDHC card of Speed Class C10, UHS Speed Class U3 with UHS-II bus. Lexar reckons this one will read at up to 300MB/s and write at up to 270MB/s.

With all three SD cards I conducted write and read speed tests using 137 photos with file sizes in the 5 to 9 megabytes range. The total came to 1.00GB (using 1024 as the calculating factor). I used 8 photos amounting to 0.054GB for the MMC.

With the latter two cards I also tested write and read with one video file, 1.21GB in size.

It’s the read speed that’s important for our purposes, but I checked write speeds anyway out of interest.

Finally, a caveat. I used the USB 3.0 port on my Microsoft Surface Pro 4 and did all the copying to and from it. With the higher speed stuff it’s possible that it may have had a significant impact on transfer speeds compared to some theoretical ideal. So this test isn’t a test of how fast things can go, but how they compare in a real work environment.

The Lexar drive made little difference with the MMC card – only read bumped up from 1.98MB/s* to 2.27MB/s. I only tested this because, well, I happened to have the card there. Also. I was interested in how much things have gotten faster over the years.

Neither did the Lexar drive make writing to the standard SD much better – just about 6MBps for both card readers. However when it came to read speed, it cut the time from over 92 seconds (11.7MB/s) to under 50 seconds (21.7MB/s) for the gigabyte of photos. That says to me that the internal memory of the card supported much faster reading than the old SD card reader permitted.

Now for the faster cards. With the photos, write for the Transcend SDXC card was 13.6MB/s with the old card reader and 30.2MB/s with the new. Reading made a much bigger difference, boosting speeds from 11.5MB/s to 66.9MB/s. In the real world, that reduced the copy time for the 137 photos from 93 seconds to 16. That’s quite a saving.

That’s with 137 photos. Writing files involves things like opening and closing them, making file system entries and so on, and the time take for those is not insignificant. So a single large video file (1.21GB) makes for a better test of raw data read speeds. So here we go.

So, yes, the Lexar Professional Workflow SR2 SD card reader is most definitely worth it for time savings. But also for things like previewing your photos using your computer while they’re still on the card. With this reader and either the Transcend or Lexar cards, everything just snapped to the screen without the usual delays.

* So, is 400Mbps (megabits per second) fast? UltraHD Netflix streams at below 25Mbps. Full HD Blu-ray discs are typically encoded at between 15Mbps and 35Mbps. The bitrate on UHD Blu-ray is uncertain, but we can confidently say that it is less than 100Mbps.

** For the data rate I used thousands as the “mega” multiplier rather than 1024, since that seems to be the industry norm.