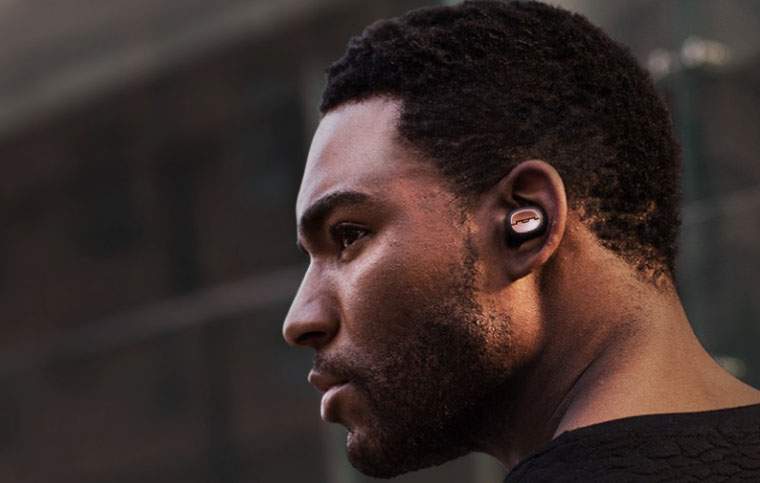 What a great set of ideas: earbuds without wires between them; a case which recharges them; a case, indeed, which at a pinch can be used to recharge your phone. That’s the Sol Republic Amps Air Earbuds.

I’ve largely given away the major details already in the intro, but let’s drill in a bit. Available in copper and black, aquamarine or electric blue, what you wear are two small earbuds with no wires joining the two. These each have three slightly recessed gold-plated contacts through which they’re charged in their carry case. Silicon tips are provided for a comfortable, ear-conforming fit. In fact, there are four different sizes provided. That’s all the more important for units like these in which there is greater weight in the earpieces than usual.

Not that there’s all that much of that. Each weighs between 5 and 6 grams according to my trusty – but limited to one gram of resolution – scales.

When not in use you keep them in their case, which looks like a metal box but is probably metallised plastic. This is a solid feeling thing which weighs, without the earbuds, 119 grams. Its lid snaps satisfyingly open and closed and a switch in its mechanism briefly lights up to four tiny indicator LEDs on its face each time it’s closed. These indicate the level of charge within the built in rechargeable battery. There’s also a movement sensor so they also light up if the case is picked up or shaken.

This has a capacity of 2200mAh and can be charged via the Micro-B USB socket on the side, and used to charge phones and so on via the standard USB socket next to that. But of course, it’s primarily intended to charge the Amp Air earbuds. Fully charged, they are said to last three hours and there’s enough charge in the case to refill them fifteen times. That makes for a total of some 45 hours of operation all up (so long as you don’t use the case to charge your phone instead, of course).

A short USB to Micro USB adaptor cable is provided. This can be used to charge up the case, or to charge up many Android phones from the case.

In addition to playing music, they provide hands-free telephone functionality and can work with Siri and Google Now (and presumably Google Assistant as it’s rolled out).

The Amps Air earbuds provided for review were what I described earlier as “copper and black”, but their official name is “Jet Black & Rose Gold”.

The interior of the case has two sculpted bays for holding the earbuds. As you place them in, they snap into place, pulled by a magnetic field. Their LEDs light red as their contacts connect with those in the bays. Despite the magnets, they are easy enough to pull out.

You will want to work out which bud is left and which is right. For quite a while I didn’t think you could tell them apart, so I used an audio track I made years ago identifying the two channels. And then I carefully kept them the right way around. But just before embarking on writing the review, I had an extremely close look and, yes, it turns out that they are marked “L” and “R”, in close to invisible ridges on the enclosures, with a seam running through the middle of them. You’ll see a photo nearby showing these markings and it’s discomforting to note that they read very clearly in the photo. That’s what I get when I use a high quality digital camera and a fine macro lens. I insist, nevertheless, that to the naked eye they are unclear.

I’d suggest: deploy the magnifying glass and a bright light, find the markings, and then put a dot of white on the right hand one to aid future identification.

You may also want to spend a bit of time working out how best to seat them in your ears and which size silicon tip to use. They were pre-fitted with the second largest and I found the bass not quite as satisfying as I felt it should be with these in place, which I attributed, and still attribute, to them not quite sealing my ear canals. So I did a lot of experimenting. The larger size seemed to be the solution for a while, except that while I could get a seal briefly, they’d keep working their way out and suddenly one or the other would pop out of my ear.

Luckily I carry a flashlight when out walking the dog after dark.

One result of this is that I can report that they are quite robust, suffering no ill effects from quite a few falls to the ground.

In the end, I found that the original silicon tips provided the best balance between security and bass performance. The seal actually seemed to improve over time. Once I’d settled on those tips and found the best way around to place the earbuds, security was excellent. I did a number of five kilometre walks with no problems.

Speaking of security, the connection security was excellent. The only way I could break the connection was by completely covering my iPad Nano with my hands so the Bluetooth signal couldn’t get through. Otherwise it didn’t matter which pocket I put it in – even with it in the normally problematic left hand pants pocket there were no connection problems. Out of doors I found I could walk up to fifty metres away from the iPod Nano before it would drop out. This is the best performance of any Bluetooth ear-wear I’ve tested apart from the Beats Solo3 headphones.

That said, a couple of times when I did break the connection – not every time, mind you – the sound was touch weird when I released the iPod Nano from my clasp, or wandered back into range. Specifically, it sounded as though the earbuds were out of sync with each other by a tiny amount, probably only a millisecond or so. It was just enough to make mono stuff sound like it was two sounds coming from both earbuds, instead of one cohesive sound. If I ignored it then after a minute or two the two buds moved back into sync.

The sound quality was reasonable, with the amount of bass depending entirely on the tightness of the seal. When I’d finally worked out seating properly, it was pretty impressive: extended and powerful. They were rather bright, though, emphasising sibilance in vocals and the upper harmonics of voices. Cymbals could be quite prominent and sometimes pianos sounded a touch thinner than usual because of the treble bias. Tape hiss on older recordings was also more apparent than usual.

That also made the spoken work extremely coherent and easy to understand.

Each earbud has a single control, and since they duplicate each others’ functions, that means the pair effectively only have a single control: just a push button on the side. This is used by single pressing (switch on/play/pause/answer/hang up), long press (switch off), double tap (enter pair mode/invoke Siri or Google), with the function depending on context.

Which brings us to the interesting question: how do you adjust the volume? Answer: you don’t. Or, rather, you adjust it the same way you would with plug-in headphones: you use the controls on the source device. The maximum volume the Amps Air earbuds are capable of producing is very high, something I certainly welcome. I typically had the indicated volume on the iPod Nano at around ten per cent for a comfortable listening level so there was lots of room for turning up.

As a handsfree headset the results were mixed for me. I could not make the Android phone respond to the double tap it invoke Google Now. But with answering calls things worked well enough.

What a really great concept the Sol Republic Amps Air wireless earbuds are. Long effective life, thanks to the powerbank-case, compact, plenty of volume and versatile. The only real improvement I’d like to say is for the treble to be tamed a little.