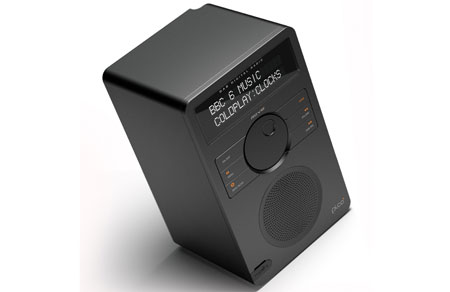 As the name implies, the Pico is small. It’s not iPod-put-it-in-your-pocket small, but the case would be just large enough to hold a drink can inside, which makes it more compact than most other DAB+ radios we’ve seen, and very much suitable for travel.

The front has a bright two-line display, a jog dial with which you select your channel, and a set of control buttons to switch modes and control the volume. It’s very neat, very simple, and we were very pleased at the speed with which we could switch between digital radio channels.

We were also pleasantly surprised with the audio output of the Pico. The Pico’s integrated speaker, although small, actually delivers audio with remarkable depth and clarity. It’s mono, of course, but the back of the Revo sports RCA outputs for connecting to larger stereo speakers. When we did so on our test device, the stereo output was deep and rich with plenty of detail and virtually no gremlins.

The front of the Pico also has a 3.5 mm port into which you can plug a portable MP3 player. It’s not a proper iPod dock, however, so you can’t use the Revo to control playback on that particular MP3 device.

It has a non-changeable integrated lithium ion battery that Revo claims will last for 12 hours of DAB+ listening before needing a recharge. In our testing it actually lasted rather less, going for 10 hours before failing.

It also comes with a slimline remote with which you can control both the FM and DAB+ radio playback. Conveniently it has buttons for all 12 channel presets, making switching between channels using the remote very fast indeed.

It’s not big on the bells and whistles, but what the Revo Pico does, it does right. Quality audio, a stylish and solid design, a user interface that’s simple and logical and a useful remote make it a product worth having. It doesn’t deliver the audio quality of say, the Arcam FMJ T32 or have the features of the Pure Evoke Flow, but as a basic single-speaker DAB+ radio, it’s a winner.