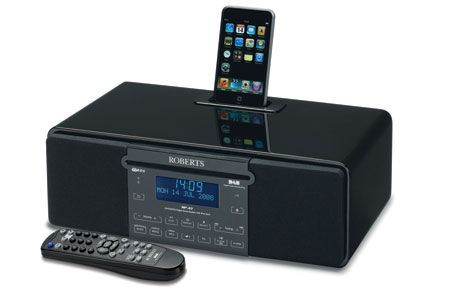 Roberts’ Sound 43 functions as an iPod dock and CD player as well as radio tuner – and it performs all three functions very well. It also manages to look good while doing so, with its modern interface, clear two-line LCD and piano finish.

Although it looks a little odd with its telescopic antenna protruding out the back, that antenna allowed it to pick up all the digital radio stations in our test area perfectly. Using the touch-sensitive buttons, we could quickly switch between them or load them into one of ten digital radio presets.

The speakers managed to output high quality audio, showing off details that many of the other integrated digital radio speakers missed, even for FM and DAB (as opposed to DAB+) audio. They’re certainly a cut above most of the first batch of digital radios to hot the Australian market. If the sound output is not big enough for you, it also has a line-out with which you can connect the Sound 43 to a larger stereo system.

The Roberts also impressed when we played back music from an iPod and from a CD filled with MP3 tracks. It managed to give the compressed audio a unusual depth, rivalling some of the best iPod docks we’ve seen. The CD support also extends to WMA, but it doesn’t read embedded tags for sorting tracks on CD. It does, however, have handy buttons for folder navigation on data CDs.

The Sound 43 comes with a proper, full remote (unlike the usual credit-card remote you often get with digital radios). The remote has all the buttons you need to operate the radio, including numbered buttons for quick track skipping and access to FM and DAB+ radio presets.

On top of all that, the Sound 43 incorporates an alarm system that can even play music from an attached iPod. It supports two presets and a configurable snooze time.

This impressive multi-functionality makes the Sound 43 a worthwhile purchase. While it would have been nice if it had a few more digital radio features (like timeshifting or controllable radio text), it’s still an impressive product overall.