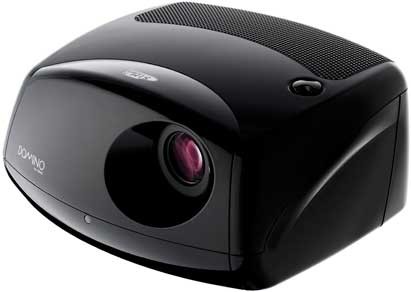 It seems that just about all home theatre projectors come from either the United States or Japan. But SIM2 is an exception, based in Italy and with its products manufactured in Italy. The company has now released three 1080p projectors, of which the Domino 80 is the entry level model.

Although ‘entry level’, it is unlikely to disappoint. It still features a high-end Texas Instruments Digital Micro-mirror Device, the 0.95 inch (24 mm) DarkChip3, the latest in that company’s arsenal. And this DMD has the full 1,920 by 1,080 pixels required for true high definition display.

Backing this up are coated optical glass lenses, Pixelworks digital signal processing, and such conveniences as powered focus and zoom. There is also a vertical lens shift, manually operated by means of a knob on the top of the projector. In the review sample this was very stiff and didn’t offer a great range of movement. In normal installations it is best to leave the lens shift as close to the centre position as possible anyway, for an optimum light path.

An important part of true high definition projector performance is for it to be able to deliver a HD image without any scaling whatsoever. The SIM2 Domino 80 offers this capability. In fact, it has the best control over picture scaling I have ever seen in a projector (aside from other SIM2 models), with three user modes of aspect ratio available to store your own settings. But just by choosing ‘anamorphic’ and delivering a 1080i or 1080p signal, you get each digital dot in the signal perfectly allocated to each digital dot in the display.

The black level performance was excellent and, being a DLP projector, it didn’t rely on a ‘dynamic iris’ to achieve it (these appear in LCD projectors to manipulate overall light levels to enhance dark scenes).

The colours were truly excellent as well, with a good range of control over them if you wish to tweak the final result using a calibration disc.

Overall the video processor from Pixelworks did a good job, but not a perfect one. Some of my more difficult test videos managed to fool the circuit occasionally, causing it to treat progressive video as though it were interlaced, thereby reducing its quality. Like most projectors, this one lacks a setting to allow you to force the projector to behave properly in these cases.

The projector really came into its own when I played a few HD DVDs. This version of King Kong was extraordinary, both in the precise sharpness of the image, and the ability of the projector to deliver all the subtle variations of Kong’s dark coat even while surrounded with comparative brightness, such as during the Empire State Building finale.

I should also add that in a week of very intensive use, I never once caught a glimpse of any rainbow effect.

SIM2 has delivered an extremely impressive projector that not only delivers true high definition video, but delivers its two million pixels with grace and accuracy.