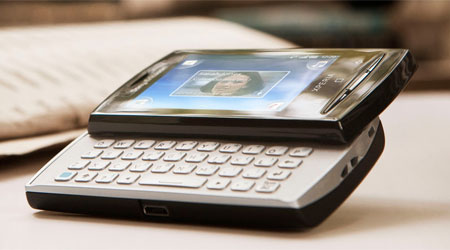 We’ve all seen the iPhone clones, complete with their 3 to 4-inch screen sizes, multimedia feature sets, and Internet connectivity. Now what if you took all of that and put it in a bite-sized form factor?

At 9cm x 5.2cm, the Xperia X10 Mini Pro is one of the smallest smartphones we’ve seen. Don’t be fooled by its size though, as there’s a lot going on inside. A slide-out QWERTY keyboard kicks things off, then there’s WiFi b/g support, GPS, a 5 megapixel autofocus camera with LED flash, Bluetooth, and a scratch-resistant surface. The 2.55 inch capacitive touchscreen shows only a resolution of 320 x 240 pixels, but because of the small form factor the display looks good.
A 2GB microSD card is provided in the box, as is a 3.5mm headphone jack, giving this phone practical use as a media player. The Xperia X10 Mini Pro natively supports MP3 and WMA audio files, as well as MP4, H264, and WMV for video. Sadly, there is no DivX support to be found here.
Plastic surrounds most of the 1.7cm thick phone, except at the back which has been rubberised and provides the impression that the X10 Mini Pro is more durable than it probably is. Altogether, the phone feels good in the hand.

Despite Sony Ericsson’s use of the older 1.6 version of Android, everything pans out fine. In fact, you’re unlikely to care about an upgrade to this OS.
This is because Sony Ericsson has actually customised Android for the Xperia X10 Mini Pro. Here, Android 1.6 shines because, rather than being modified to just appear different on the small handset, it has been modified to function for the handset’s minuscule size.
Instead of multiple widgets per page, Sony Ericsson has gone with one. Instead of a dedicated menu button, you just have to flick up and the menu appears. And despite the small screen size, Sony Ericsson has put the four most-used icons around the  main screen for easy use: mail, music, contacts, and a phone dial pad.
It’s this level of customisation that makes the Xperia X10 Mini Pro special, as it no longer looks like just another Android phone. The only thing that the Xperia X10 Mini Pro misses out on – and which the Android 2.1 crowd can enjoy –  is support for new apps via the Market. In choosing the older operating system, Sony Ericsson has made any new apps unavailable for the phone. With only a handful of developers still making applications for the older Android 1.6 operating system, the wide selection of apps normally available to Android users won’t be offered here on this handset.

Unlike its full sized brother (the Sony Ericsson Xperia X10), the tailor-made operating system makes the Xperia Mini feel purpose-made, and here that purpose is to offer multimedia goodness with touchscreen convenience.
The five megapixel camera bolsters this, providing a combination of good software controls and decent image quality in the small size. Video recording is there too, but only in  low VGA resolution. Sadly, there’s no 720p HD inside this phone.
While not exactly a powerhouse, there’s still a 600MHz processor lurking underneath the surface buttons, giving the Mini Pro more than enough power to handle phone, messenger, and multimedia player duties. This chip is actually the same processor that’s found in the HTC Aria.
With only 128MB of memory, you won’t be installing too many apps, but given that you’re running Android 1.6, that’s true regardless.
The slide-out keyboard, which comprises most of the handset’s meagre heft, is surprisingly comfortable. It allows short messages, notes and emails to be created easily and quickly, and we found we preferred it to the virtual keyboards from on other Android handsets we’ve tried.
The screen quality does tend to sour things, however. With 320 x 240 running on a tiny 2.55 inch screen without multitouch, web browsing is left in the lurch. Most websites look horrible – pretty much unreadable at full size – and zooming is achieved with a magnifying graphic at the bottom of your tiny browser window. No push-pull or pinching as found in higher end handsets here.
Further, you can also expect the piddling screen to compromise the utility of the otherwise excellent slide-out keyboard We found that, every so often, we would have to snap the keyboard back in and jump from landscape to portrait mode as a way of getting around screen issues while typing.
At $629 RRP, the Mini Pro also has a heavy asking price. With current mobile plans, we were able to find it for $0 on a $19 cap which made it a decent package for someone after a modern music phone with a modest prices tag.
Given the sort of competition Sony Ericsson has with this and other sub-$700 phones, it only becomes a decent deal on one of these plans. Outside of the size and slide-out keyboard, it doesn’t stack up against competitors, especially when you include an outdated operating system.

Despite being a tad chunky, we couldn’t help but like the size, feel, and feature set of the Sony Ericsson Xperia X10 Mini Pro.
It won’t be for everyone, but if music, messaging, and a minuscule size are high on your smartphone priorities, you’ll want to take a look.
Overall
Value for money
Performance
Ease of Use
Design
Reader Rating0 Votes
One of the smallest smartphones you'll see; Great for music; Slide-out QWERTY keyboard; Excellent five-megapixel camera;
A tad chunky; No multitouch; Tiny screen resolution makes web browsing a horrible experience; An update to a current Android operating system would be nice;
3.2