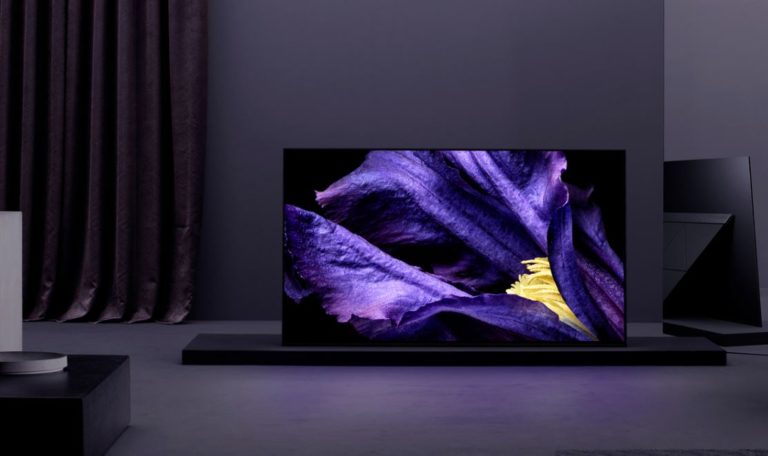 The Sony Master A9F OLED 4K (3840 x 2160) TV is a masterpiece of both imaging technology and sound engineering.

We all know that Sony, Panasonic and many other OLED TV makers get their OLED panels from LG. They then wrap around it their design, sound, electronics and marketing prowess to try to top LG!

Is the Sony Master better than the LG?

To use a Japanese saying “Motoki ni masaru uraki nashi” – no fountain can rise higher than its source. Can Sony do more with the LG OLED panel than LG can?

To prove that Sony placed an LG OLED side-by-side, reset both to the factory defaults and then used a signal generator to simultaneously show a variety of content.

The answer, if you can believe your eyes is yes. Both LG and Sony are excellent. But, in the final analysis, there was a perceptible difference in image quality.

Sony put it down to its marketing positioning, “From Lens to Lounge” claiming it has leveraged its Sony Pictures Entertainment expertise as a producer of blockbuster films and TV series to develop the electronics and finesse the Master A9F OLED to as close to what the filmmaker sees.

As a journalist I want to thank Sony for the facilitating a comparison – we love ‘shoot-outs’. You will note that major retailers no longer place different brands side-by-side for comparison. Their answer to what is the best picture is what makes them the most money!

The Sony Master 55A9F OLED is $4,998 (on special from  $5,799). It is the best Sony has to offer. It uses brand-new 2018-19 technology with its X1 Ultimate Processor and Pixel Contrast Booster. Marketing hype aside it has more power to process more metadata (colour data) on a frame by frame basis than its previous model.

It was in no way an apple with apple comparison.

Nice try Sony, but it did not impress this tech journalist! If anything, it made me a little more sceptical about the new Master Series from the Master of Marketing hype – Sony.

So, began a review of the 55” A9F OLED during an overnight stay (courtesy of Sony) at the Ovalo Hotel – a well-worn method of getting tech media to review TVs. It is a hell of a lot easier than carting a 55, 65 or 75” TV into your office or home, disrupting your existing TV setup and leaving it for a week or so only to wrench it back after you realise how inadequate your existing TV by comparison!

The benefit is that we get to see it and play with it. The downside is that the time is too short and hotel room lighting conditions are usually too dim to really get to know the TV.

Armed with my 4K TV testing software – a greyscale generator, colour bars, tone generator and a few tests for DCI-P3 colour gamut I set out to put the TV through its technical paces.

As expected of any OLED with pixel-level control it gave good, rock solid colour bars with clear definition between bars – no overlap. There were no bands of lighter and darker colours that you see with LED/LCD TVs. PASS.

The Greyscale test is from pure black to pure white and back again in 2% increments. The A9F OLED clearly reproduce all bars with a clear delineation between them. Most TV’s tend to blur the first 10-15% black into more of a smoky black than four levels of inky blacks and ditto with whites. PASS

The test for 10-bit colour is to show over 1 billion shades. The first test is 8-bit (16.7M colours), and then it places a 10-bit image beside it. I did not have time to count the colours ? but it was clear that this screen was producing most, if not all, 10-bit colours. PASS

DCI-P3 colour gamut tests require a colour calibration device. CalMAN have a Colour Calibration camera and software – alas I don’t have one, but Sony did! Suffice to say its ‘Delta E’ (the variation between Calman reference colours and Sony’s Master A9F OLED) was negligible.

Sony’s objective was to create a television capable of images that faithfully convey the content creators’ full intent. PASS

A note on Sony Marketing Hype

Don’t get me wrong – I think Sony makes some very good gear. But it gets under a techie’s skin to hear the masses of marketing terms like:

Sony is the Oscar Award Winner for Marketing terms. Every other comparable brand/model OLED TV performs similar functions usually without having to invent a whole new language. Still, if you want to drink the Kool-Aid, there is none better than Sony.

Missing is Dolby Atmos processing, but it does have eARC (Enhanced Audio Return Channel). eARC is a feature of the new HDMI 2.1 standard, and Sony is one of the first to implement it.

eARC allows full-resolution sound signals — including 3D surround sound formats like Dolby Atmos and DTS:X — to pass from the TV to the audio systems. That is regardless of whether it comes from – over-the-air broadcasts, internal streaming apps, Blu-ray players or game consoles connected directly to your eARC-enabled TV. In short, it can play Dolby Atmos content if you have a Dolby Atmos sound bar or sound system.

The effect is a 3.1 system. Stereo separation (hearing sounds from the left or right) is good. Sony has S-Force (simulated) Front Surround but it needs and right side solid surfaces to bounce off. Clearer voice comes from the centre channel.

Using a tone generator, we achieved 77dB maximum volume. That is a little below what I would have expected from the 98W output. Yet in the typical hotel room, the volume was fine – more than satisfactory for movies.

Sony crows about powerful bass. The reality is that hints of bass start to creep in at 70Hz and finishes at 180Hz – powerful bass it is not! Then you have a good flat frequency response from 200Hz to about 10kHz (good) when it goes south before spiking again at around 15kHz.

At 80% volume, it is Sony’s typically warm and sweet easy to listen to sound signature. But at full volume treble was harsh, spiked and broke up.

People buying a 4K TV and spending $4K or more really need to factor in a decent sound system. While the TV sound was adequate in a 35m2 hotel room, it lacks the lower bass subtlety and nuances a decent Dolby soundbar or AV Amp/speakers system offers.

Sony is one of the few TVs that can support Bluetooth headphones at the same time it is using either the TV speakers or an external audio system. It is not ‘automatic’ – you need to use the Action Menu to connect each time you want to use them.

With most other TV brands, you need to purchase a multi-point (two devices) Bluetooth Dongle (about $80) and connect it to the TV headphone jack. Then connect your BT soundbar and headphones via BT to the dongle.

So how is the picture?

Sony kindly left me a 4K Ultra HD Blu-ray Hotel Transylvania 3: Summer Vacation animated movie that is not really my style. It does have DTS (DTS: X), Dolby Digital, Dolby Atmos, SDDS, Auro 11.1 sound. It does not have HDR or Dolby Vision. Not the best to test, so I left the vampires sleeping!

I watched a little of Netflix Altered Carbon (it was nearly midnight) that is in 4K with Dolby Vision. I have seen this before last year’s top of the range LG OLED, and it was amazing then. Yes, it is equally amazing on the Sony.

Sony has a neat Netflix calibrated mode and a Netflix button on the remote. Netflix provides metadata to the Sony TV to ensure the reproduction of its compressed 4K video stream is as good as possible. This is currently unique to Sony.

A characteristic of all OLED screens is a reasonably glossy screen – it helps saturate colours more than a matte screen. The Sony A9F OLED is no exception.

With OLED it is important not to have any strong or direct light source coming from behind or beside you (when viewing). OLED is best in the right environment.

The hotel setup had it at the end of the bed and the two side table lamps plus the white doona where evident.

If light control is an issue go for a top end LED/LCD.

From the front, the A9F OLED is a big pane of black glass. On the back is an integrated Surface Pro like kickstand. It is also wall mountable. It looks great, but it means the panel sits flush on the shelf, so there is no room to place a soundbar under it – unless you wall mount it.

The Sony remote is easy to use. It has a Mic button for voice control (or the TV mics as default). It also has dedicated Google Play and Netflix buttons.

The ports can are accessible when wall mounted. The manual is here.

When wall mounted the set is 86mm deep.

I own last year’s Sony 4K UHD LED/LCD TV, so I am familiar with Android TV ‘O’. As a TV operating system, it is fine although I do not mind Samsung Tizen, Panasonic My Home 3.0 or LG’s webOS 4.0 either.

Each is different, yet they all do much of the same things. Android TV ‘P’ looks less cluttered and more about the recommendations from content providers. Both Android TV and webOS 4.0 support Google Assistant and all that entails. They also support Chromecast to the TV.

In the limited test time, it performed OK Google commands well and added a visual component too – although it has not yet implemented the Android Things visual interface that is a feature of OK Google speaker/screens.

If you want to read more on TV operating systems, there is a good article here.

It is a great TV. But I feel it is one of the best, not necessarily the best.

OLED is the premium panel – no doubt. It is best in a room where you can control light on the screen – reflectivity. Sony’s mastery of OLED in the Master A9F series is impressive.

If you can’t control the light – as is the case in so many Australian households – then the top-of-the-range 4K UHD LED/LCD TVs like Sony’s Z9F Master, or LG’s Super UHD K9, K8 (Review here)  or K7 series, Samsung’s excellent Quantum Dot Q9, Q8, Q7 or even its Q6 series, or Hisense Quantum Dot Series 9 or 8 are all better alternatives.

While you can listen to the marketing hype, you should choose what looks best to you for the price you can afford.

Features
Value for money
Performance
Ease of use
Design
Reader Rating0 Votes
Almost no bezel black glass slab
Effective Surface Pro like integrated kickstand
TV 3.1 sound is effective but not really a substitute for a 3.1 or 5.1 soundbar
eARC adds soundbar and AV amp flexibility
As good a picture as you can get from a 2018-19 model OLED
Google Assistant and Alexa support
Slab sits flush on the shelf – no room for a soundbar
Reflectivity is an issue with all OLED
4.5