Stargate Continuum on Blu-ray and DVD 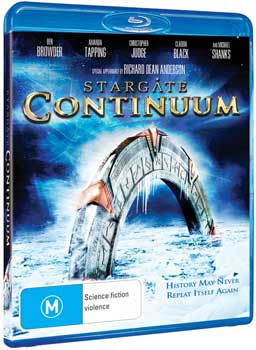 The most northerly-filmed movie production in history, filmed partly in the Arctic, Stargate: Continuum is the most ambitious Stargate production yet, featuring incredible visual effects, out-of-this-world battle sequences and breathtaking scenes shot on the Arctic ice.

According to Producer Brad Wright, “We’ve got nuclear submarines, F-15’s and the bone fide Arctic Circle. Add our fabulous cast, including Beau Bridges, William Devane and Richard Dean Anderson and you’ve got yourselves a movie.”

Stargate: Continuum, also being considered for the Guinness Book of World Records for “Most Northerly Film Shoot”, is packed with a host of all-new bonus content on DVD and blu ray, including feature-length audio commentary with Producer/Writer Brad Wright and Director Martin Wood, as well as three featurettes. Delving into the extraordinary making of Stargate: Continuum, the featurettes explore how the US military provided assistance, such as a Navy nuclear submarine and F-15 fighter jets from the Air Force, what it was like shooting in the Arctic, and how science and science fiction collide.

While SG-1 attends the execution of Ba’al, the last of the Goa’uld System Lords, Teal’c and Vala inexplicably disappear into thin air. Carter, Daniel and Mitchell race back to a world where history has been changed: the Stargate program has been erased from the timeline. The remaining SG-1 members must find the Stargate and set things right before they world is enslaved by the Goa’uld.

What’s on the discs?

The Stargate: Continuum DVD is presented in widescreen format.

The Blu-Ray release will be authored in BD-Java with AVC (MPEG 4 compression) on a single-layer 25 GB disc with English 5.1 DTS HD Lossless Master Audio plus French 5.1 Dolby Digital and Spanish 5.1 Dolby Digital subtitles. The disc features all of the special features mentioned as for the DVD version.