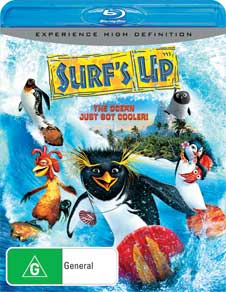 Quite justly missing out on the Oscar for ‘Best Animated Feature Film of the Year’ to the vastly superior Ratatouille, Surf’s Up is one of those curiously misguided anthropomorphic animated films that treats its characters like humans, abetted by a (totally unnecessary) huge, star-studded voiceover cast.

Like Open Season and Shark Tale before it, this is not a movie with animal protagonists that have animal problems and concerns – unlike, say Finding Nemo, Toy Story or even Ratatouille – but rather one that treats them as little humans, with human characteristics, behaviours and issues. The net result is that, as engaging or impressive as the animation can sometimes be, Surf’s Up turns into yet another underdog-come-good story that is simply too familiar, echoing the rather sad celebrity-obsessed media ‘culture’ that dominates in the human world.

This type of human story with cartoon avatars appears to be Dreamworks’ MO these days – what with Bee Movie, Madagascar and Shrek all toeing the same line – but leaves us thinking ‘who cares, really?’