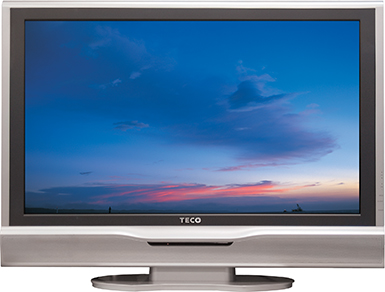 The Teco TA4271PW LCD TV is a mixed bag of surprisingly high, and disconcertingly low, performance elements. It offers a nicely large 107 cm widescreen LCD panel in an attractive cabinet, with a pre-attached desktop stand.

The panel offers the common LCD resolution of 1,366 by 768 pixels, thereby upping the measure on most similarly sized plasma panels by one third. The TV features built-in analog and standard definition digital tuners.

Importantly, it also has plenty of A/V inputs, including two for HDMI. However all are at the back of the TV, and there is no headphone output.

The default sharpness setting on all the different picture modes was much too high on delivery, leaving an appearance of graininess on the screen. This was easily addressed by simply turning down the sharpness control. In most cases, right down to zero gave the best result in picture smoothness, without significant loss of detail.

Having done this, the colour performance was excellent: very naturalistic and well modulated, with smooth transitions through the colour gamut where required (such as on faces) rather than abrupt changes in level.

As implied by the contrast ratio specification of 800:1, black levels were not very deep. Worse, there were four large splotches of greater brightness on the screen during very dark scenes. Viewing in a darkened room was not a very satisfying experience.

One aspect in which this TV’s performance was extraordinary was in its deinterlacing of external inputs. The specifications boast ‘3D De-interlace’, and its performance seemed to be about as effective as Faroudja DCDi. It switched seamlessly between film and video modes, producing the best picture from both forms of video, except for the same places where Faroudja’s circuitry is also tripped up.

The SD tuner seemed to be a touch grainy, but reasonable overall, while the reception was very solid.

However there seemed to be a major flaw in the design of this TV. I first noticed this watching HDTV fed in via HDMI. During one of scenery demonstration loops, the picture seemed to stutter during horizontal camera pans. I’ve seen this kind of behaviour before, so I put on a DVD to confirm my suspicions. A familiar scene in which there is a slow camera pan showed identical behaviour, and the rolling credits at the end of the movie also stuttered as they went up the screen. This was the same whether signal was fed via HDMI or analog, in high definition or standard definition.

This is the behaviour exhibited by a display that operates at 60 hertz internally, regardless of the nature of the incoming signal. Since most Australian DVDs and all TV run at 50 hertz, there is a problem. To turn that 50 hertz signal into 60 hertz internally, the TV has to repeat every fifth film frame. It is this that is visible as stuttering.

In view of this, and despite some other pleasing aspects of this TV’s performance, it is difficult to recommend it.