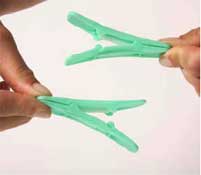 The Clever Peg is a uniquely designed clothes peg used for securing clothing and other fabrics to a drying line. The unparalleled feature of this spring-actioned peg is the fact that it is double-ended and therefore can be used by compressing the arms at either end of the peg. This feature is unique to the Australian and international market. The Clever Peg is a product made completely of plastic, including the compression spring which is acetyl nylon. This gives it the advantage of never rusting and therefore eliminates the possibility of staining clothes or fabrics.

The cleverness of this design is evident to all who see the peg. The name Clever Peg was chosen following public research in which respondents overwhelmingly supported the name Clever Peg because “the name says it all”. The intelligence factor is demonstrated in the Z-shaped spring design which provides alternate pressure to either end of the peg depending as to which one is being activated.

Visually the Clever Peg is different to others on the market due to it having four compression arms, two at each end of the peg. The trendy lime green colour is vibrant and fresh and visually appealing to retailers and consumers alike.

This is the key feature of the Clever Peg as it is can be used regardless of which end it is gripped. Items can also be hung one below the other due to the innovative Z-shaped spring and its double-ended capability. This aspect is particularly useful in areas where line space is limited such as high density apartment blocks.

Originality equals uniqueness. This is supported by the successful international patent pending applications. Searches for comparative products have proved negative.

The double-ended functionality shares the pressures of constant use between both ends of the peg, thus extending the life of the peg when in use. Tested in the Kimberley region of WA where temperatures are extreme, the non rusting acetyl nylon spring proved a winner with its retentive memory.

The Clever Peg consists of two basic components. The acetyl nylon spring and the peg body unit, with the right- and left-hand body components being identical in every respect. This design requires only two moulds for manufacturing followed by a simple manual assembly process.

The Clever Peg is designed to fit the fingers of the user but most importantly the peg can be used which ever end is picked up. The double ended function eliminates the need for the user to “turn the peg around” in order to secure a garment to the line.

The Clever Peg uses only plastic material throughout plus a simple moulded process and assembly, unlike most competitors which use a metal spring demanding greater resources required by way of metal and plastic raw materials and increased energy demands of manufacturing plant and equipment.

Packed in lots of 20, the bright green Clever Peg is packaged in a clear plastic flat pack with a stapled fold over, preprinted cardboard headboard. This offers attractive visual storage merchandising of the product. The pegs are dove-tailed together to reduce the overall pack dimensions while at the same time containing the pegs in an orderly fashion. The Clever Peg is well presented and visually attractive to consumers.