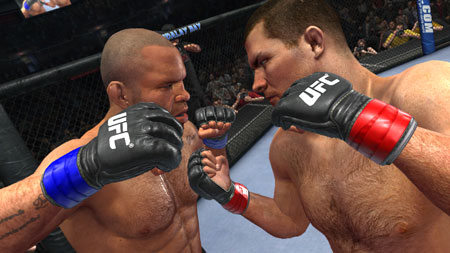 Just over a year ago, the first ‘UFC Undisputed’ game hit the shelves as hard as the superbly animated computer guys in the game hit each other, heralding an authentic and deeply rewarding MMA (Mixed Martial Arts) fighting game that actually accurately modeled the real-life sport. Except that it felt a bit slow. A year on, the next game in the series is back in the Octagon and it’s almost exactly as good as the last one.

Which is the only real downfall of this year’s game, really. Along with the near-identical name, which actually makes sense and is refreshing to see, free of all the misguided hyperbole of the PR spin department, UFC Undisputed 2010 also plays almost exactly like the last one. If you were to compare them side by side, we believe you’d come away pretty confused, so difficult is it to discern what’s changed, unless you’re a really hardcore fan. There are certainly missed opportunities – the horribly over-designed interface, particularly when trying to customize your fighter or, god forbid, add sponsor logos to your trunks, comes back more fiddly and frustrating than its awful predecessor. And for some crazy reason, in a crushingly stupid design decision, the commentary has disappeared from the fights in the ‘Career’ mode altogether, representing not just a missed opportunity but a significant step back from the first game, with the effect that your hard work pummeling your way up through the ranks feels seriously neglected. It’s inexplicable – can you imagine watching WWE without any speech, color commentary or background sound?

Grappling are clinching are both improved, the latter making the ground game a lot less one-sided if you find yourself on the wrong end of it all, and the new ‘sway’ ability evens up the striking. But it’s still too easy to get submitted by a CPU opponent, and the introduction of degradation to your stats if you don’t train a particular aspect of your repertoire makes for a lot more tedious micro-management of your fighter as well as being, arguably, unrealistic. The absence of a traditional health bar seen so often in other fighting games lends UFC Undisputed 2010 an air of tension, but damage doesn’t seem to be evenly metered out, with kicks often completely ineffectual and single, swinging knockout punches too frequent.

So the 2010 game is as about good as the last, but not better, seemingly focusing on the wrong elements to alter (as opposed to improve). It’s still great fun, with the sense of awe that can accompany some of the more dramatic knockouts or finishes in the live sport, but the ‘meat’ of the game, Career Mode, is a lackluster and oddly mute affair, failing to sufficiently engage the player.