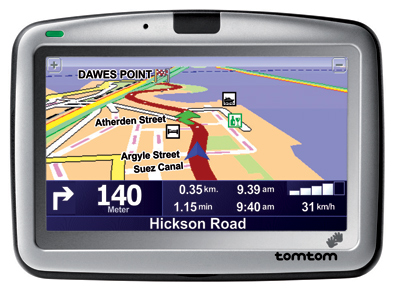 The main appeal of the TomTom Go910 lies in its ease of use, as it’s one of a rare breed of tech devices that you really can just unpack, plug in and start using with a virtually non-existent learning curve. It’s a large and somewhat bulky GPS by comparison with many other units, which makes it a better bet if you’re interested only in in-car navigation, and that’s complemented by Bluetooth phone integration and the ability to dump a large number of music tracks onto the TomTom itself.

One of the great strengths of the Go910 is in setup, which can be as simple as unpacking the unit from the box, plugging it in and hitting the only button on the unit, which is naturally enough the on/off button. All of the rest of the Go910’s features are operated either by the RF remote or from the touchscreen interface, which uses large icons to make selections very easy indeed.

The Go910 uses the ever-present SirfStar III chipset for its GPS navigation, backed up by Sensis map data of Australia. Because it uses an internal 20GB hard drive, there’s no card slot for adding extra maps or other files. Having said that, the provided PC dock and included software allow you to perform the same tasks regardless, and maps can be purchased and downloaded from TomTom’s website.

The Go910 offers a text-to-speech facility that’ll read out the names of streets as and when you need to drive onto them. Like many newer GPS units, the Go910 includes Bluetooth connectivity to compatible mobile phones, and in conjunction with the text-to-speech facility, you can also use this to “read” SMS messages.

The navigation features of the Go910 worked flawlessly in our tests for both short hops and longer driving trips, and the advantage of having a larger screen was immediately apparent, as it made checking the screen much easier, and thus much quicker – this is a vital consideration for a GPS, where you shouldn’t look at the screen for more than a split second so that you can concentrate on keeping your eyes on the road.

The Go910 also scored points with us for clear navigation around trickier formations, such as double roundabouts or areas where we needed to be in specific lanes. It even tracks and notes speed cameras and school speed zones, although we couldn’t work out how to get it to shut up about school zones outside school hours.

One physical factor that slightly annoyed us with the Go910 was the windscreen mounting dock. On longer driving trips, we found it had a slight tendency to slowly droop downwards as time passed – almost certainly due to the Go910’s larger than average 340 gram weight – which made it a touch trickier to read. Thankfully, it’s nothing that can’t be adjusted with a quick tap at the base of the mount.

The Go910’s text-to-speech facility varied from the acceptable to the comically awful in our testing. While it’s not a make-or-break type of feature, we often found it distracting to listen to its rather garbled pronunciation of even some simple street names. You can see what we mean at TomTom’s Website for the product. We don’t even want to think what it would make of SMS TXT speak.

If your GPS needs are for in-car use only it’s hard to overlook the very novice-friendly TomTom Go910, and the additional space to store a whole lot of music is just the icing on the cake.