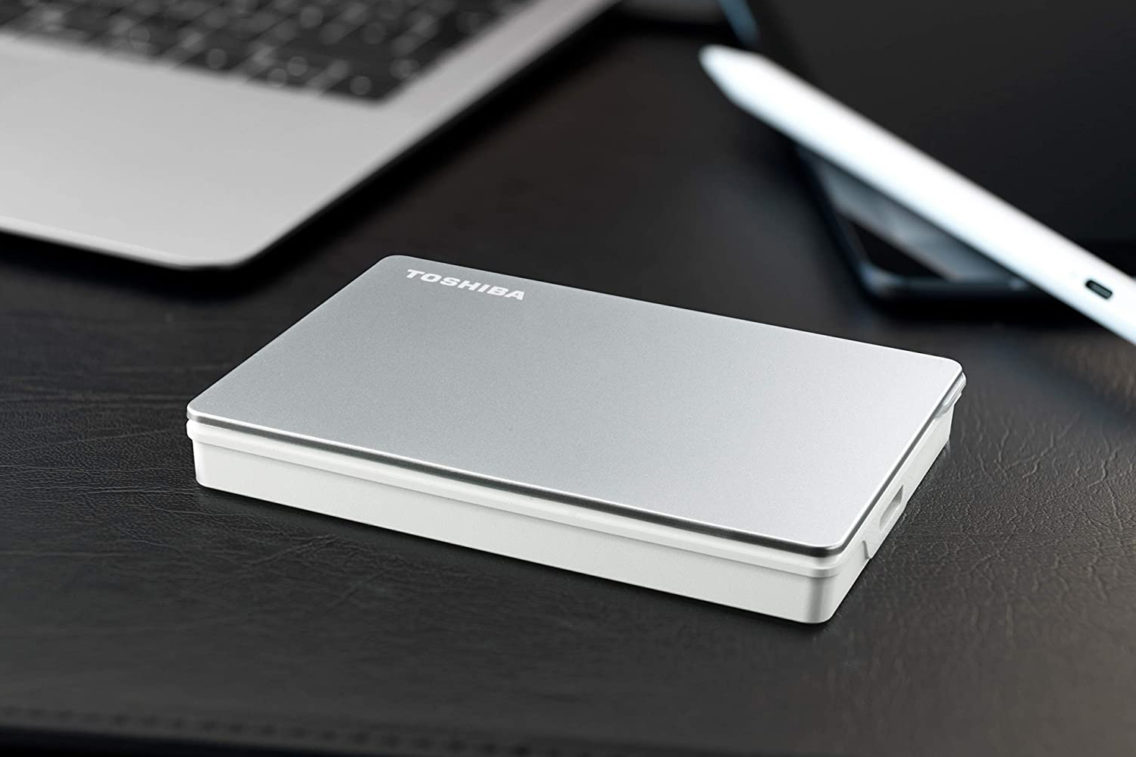 Toshiba is not a brand that first comes to mind when considering external storage, but it is one of the better notebook hard disk makers. Toshiba is now part of the new consolidated Dynabook (formerly Toshiba Client Solutions) owned by Sharp. The heritage is still there – the world’s first laptop in 1985 and well-known sub-brands like Portege, Tecra, and Satellite.

Toshiba Canvio Flex is for Windows, Mac, iOS, Android, and Chrome – any USB equipped device. Toshiba Canvio Gaming uses the same internal hard drives (Toshiba MQ04 Series) but can be formatted for PlayStation or Xbox and has an always-on feature.

The enclosures have a micro-B, USB-C 3.1 Gen 1 interface capable of 5Gbps (625MBps), and the drives are SATA 3/6 capable of 6Gbps (750Mbps). But the fact is that USB is half-duplex, meaning that you will achieve <50% of the theoretical interface speed. The drives have a cache to maximise throughput, but the USB interface is the bottleneck – common to any external drive.

The 1 and 2TB 5400rpm drives are single-platter, single/dual-sided, and the 4TB is a dual-platter, dual-sided. They use SMR (Shingled Magnetic Recording) overwriting part of the previously written track analogous to the overlapping shingling of a roof. To make this process more efficient, the drive has a DRAM buffer (128MiB/134MB on the 1/2TB versions) to maximise the interface data transfer speed. It also has a separate Media Cache that sorts the data (command queueing). The result is that a Toshiba SMR can be up to 100% faster for media serving applications than a standard hard disk. They also have shock sensors to protect the platters.

Flex is for backup. It may save your life if you get hit by ransomware. It is particularly good for sequential read/write of smaller files – typical of documents, music, and images. Once its cache fills, the random/read-write speeds drop off, so it is not for large files – use a USB-C 3.1 Gen 2 (10Gbps), USB-4 (20Gbps) or Thunderbolt 3/4 (40Gbps) SSD for that.

Gaming is essentially the same disk, but with always-on enabled, there is no spin-up or down delay, so it is always available. Older PS4/XB1 games will install and run. Native PlayStation 5 and Xbox Series X|S games cannot run from external drives. Gamers will use this mainly for storage, with typically 25 games per TB.

Both the Toshiba Canvio Flex and Canvio Gaming meet the parameters for external USB hard disks. We add a few points for Toshiba quality and the SMR drive.

You can read more GadgetGuy storage news and reviews here.

Tech for teenagers shouldn’t come at a cost

How to choose a BYOD laptop for school