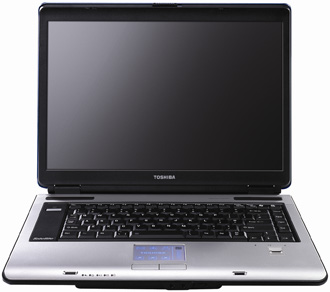 Toshiba has a well-earned reputation for producing solid, quality notebooks that marry heavy-duty construction with a decent and unpretentious sense of style. The A100 is a chassis on which Toshiba builds a number of different models – this is toward the lower end but still manages to provide a spec that puts it right in the thick of this roundup.

Most of the kit in this box is standard, but there is a bigger hard drive, and the speakers are a cut above too.

Like the ASUS and MSI notebooks, the A100 is built around the Core 2 Duo T5500 CPU. This 1.66GHz chip is more than capable of handling pretty much any task you care to throw at it.

The graphics chip in this machine is the lower end GeForce Go 7300. It works well for desktop and multimedia tasks, but will struggle with a number of newer games. Older games will work just fine though.

There’s still 1GB of memory, but the hard drive is a little larger at 100GB – all the better on which to store your totally legal music downloads.

The fingerprint scanner is a nice touch (pun intended). There’s even a special folder on the desktop called MySafe which can only be accessed by a swipe of the finger.

Toshiba has had plenty of experience building notebooks and as a result setup is seamless and painless. None of that irritating Windows setup rubbish, just a clean boot to the desktop. There are options for a tour of the machine so you can get your bearings on the extra features.

Then there’s the fingerprint setup, which asks you to encode a number of fingers on both hands and allows you to assign specific fingers to specific security tasks.

Toshiba also offers a 60 day trial of Microsoft Office 2003. This is sadly obsolete now with the recent release of Office 2007, but it will give you a taste of Microsoft’s powerful office system.

There’s very little to separate the actual grunt-level performance of any of these machines, since three of them use the same CPU and have the same amount of RAM. Toshiba’s choice to use a lower end graphics chip does hurt it when it comes to gaming, but mostly it just drives home the point that you’re paying for Toshiba’s reputation and after-sales service, at the expensive of absolute cutting-edge spec. That’s going to be worth a lot to some people, though.

The lack of a DVI port means you can’t connect this notebook to a bigger display unless you use an analog cable, which isn’t a great solution.

The A100 is a good machine that suffers simply because the two newcomers – ASUS and MSI – are able to provide a higher spec at the same price. That said, Toshiba’s long track record with notebooks means the company has a well-established customer support system. If you value warranties and timely support above slightly better graphics performance, then this will be the best choice of machine for you.

This notebook was reviewed in conjunction with three other models – follow the links below for those other reviews:

Some final thoughts on this round-up of four models?

It’s clear that Dell needs to look at the competition and see where everyone else is hitting on performance – the Inspiron was the only machine without a Core 2 Duo CPU. Fortunately Dell is likely to upgrade it soon.

The Toshiba machine has the typical high build quality the company is famous for, and good performance to boot. But the newcomers to the field do give you more for your money, and the fact so many parts are standardised now means having a solid warranty is less significant as a selling point. The “no-name” brands offer the same 1-year standard and 3-years extended as the big players anyway.

ASUS has a stylish and powerful machine that looks great and performs just as well. If you want a 15″ machine that tips the scales at less than 3 kg, this is definitely the unit for you. On the other hand, if you want as much computer for you money as you can get, MSI wins easily.

The fact it has a 17″ display at this price point shouldn’t be overlooked. What’s doubly impressive is that MSI manages to include the same CPU, a better graphics chip and slightly bigger hard drive as well! That makes the L745 pick of this litter, by a long shot.