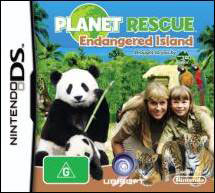 Ubisoft, has teamed up with Australia Zoo to unveil Planet Rescue, a new brand of video games for Nintendo Wii and DS. Fulfilling every child’s dream of helping to protect the planet and preserve animal diversity, the first games in the Planet Rescue series: Wildlife Vet, Animal Emergency, Endangered Island, and Ocean Patrol allow young players to save, nurture and heal endangered animals.

A percentage from each game sold will be donated to Australia Zoo to assist with funding of various conservation projects, and continue their ongoing environmental campaigns.
Planet Rescue: Wildlife Vet, available for Wii, and Planet Rescue: Animal Emergency, available for Nintendo DS, lets kids live an amazing adventure as a young vet who cares for domestic and exotic animals. Planet Rescue: Endangered Island for Nintendo DS allows kids to become members of an environmental rescue team whose mission is to save the wildlife on a beautiful island that has been threatened by pollution. Planet Rescue: Ocean Patrol for Nintendo DS takes players to the water, to help save endangered marine life on a secluded island.

The Planet Rescue series is designed to provide education and information to children in order to raise awareness of wildlife issues. Terri Irwin commented, “Bindi and Robert enjoy playing the Planet Rescue games while we’re travelling. They’re fun games that also inspire children to think about conservation and wildlife rescue”.

The Planet Rescue games will be demonstrated on Steve Irwin Day at Australia Zoo on the 15th November 2008.

The Planet Rescue range will be available mid November from all major retailers.