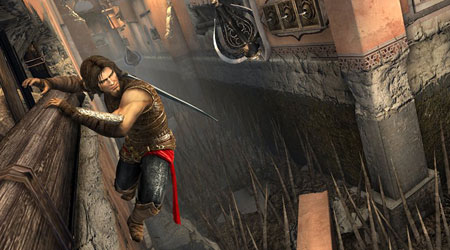 The new Prince of Persia game is a return to the core gameplay of Sands of the Time, which is most certainly a very good thing; although there’s not much in the way of innovation to freshen the offering. In your quest to save the kingdom or whatever it is, you’ll have to make your athletic way past the same saws buzzing up and down along slots, swinging spiky logs and moving vertical posts that you did in the earlier game to get to each of the new locations. Basically very large puzzles, each central location involves a lot of acrobatic wall running, jumping, swinging and climbing – very often in that order – ascending usually in a spiral motion to get to the next door, lever or what have you.

Adding to the familiar time-rewind function this time around are the abilities to freeze water in place and ‘blast’ yourself across large gaps like a fiery bowling ball. Much of the challenge in The Forgotten Sands revolves around the player’s dexterity, requiring deft use of the controller and your new powers to wall run, freeze, unfreeze, freeze again and blast a path to more solid ground, often within a limited timeframe. This is very welcome for the most part, so refreshing as it is from the usual ‘run and gun’ requirements of many other videogames, and the fluidity demanded of the player creates its own tension and excitement – after some particularly taxing manoeuvres you feel like taking a bit of a breather!

Combat has been reduced, regrettably, to a button-mash, with the game opting to throw hordes of easily-defeated enemies at you each time rather than present any real challenge. The same goes for ‘boss’ enemies, which can be disappointingly elementary to dispatch.

The game doesn’t last very long, but it’s a lot of fun along the way with weak combat more than made up for with excellent platforming. I personally disliked the departure that the previous Prince of Persia (2008) took and so was delighted to see a return to the more classic formula. That said, the developers have played it safe with this release, no doubt opting to get a good, solid game out with the movie starring Jake Gyllenhaal rather than take any risks, but a little more inspiration, innovation, or even just some more novel and interesting ‘traps’ would have made Forgotten Sands a more worthy sequel.