Up close and personal with iRobot Corporation exec Colin Angle 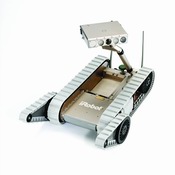 Robots: they?ve already taken over mundane manufacturing tasks, helped humans search for signs of life on Mars and have even helped save budgies from collapsing apartment blocks. Colin Angle, the chief executive officer and co-founder of robotics company iRobot Corporation, hopes to see a world in which robots might help the elderly live longer and even take charge of home maintenance and the cooking. But in the meantime, he would really like one to perform his most disliked household chore, the laundry. Ella Smith reports.

Q. So far, robotics technology has seen the creation of robotic products to carry out household tasks such as vacuuming or grass cutting. What do you think the role of robotics in the home is today and why? What other domestic chores could one day be managed by a robot?

A. We are seeing the beginning of a new industry, where robots play a growing role in our lives by simplifying routine maintenance of our homes. These tasks might one day include cleaning windows, bathrooms and basements, mowing lawns, doing laundry and making freshly cooked meals.

Q. What?s the most intriguing use of robotics you have seen at iRobot and why?

A. I would say that the most intriguing work at iRobot is our work on physical avatars. A physical avatar is a robot that can be controlled remotely and allows the user to project himself or herself physically to where the robot is. Imagine being able to visit your factory in another country and directly interact with the people there as you move about the factory floor. Imagine a house call from a doctor, where the doctor was performing the work using a robot in your home, while he remained at the hospital. The ability of a physical avatar to fundamentally alter what it means to be somewhere will change things.

Q. How can robotics change the way we live (both in and out of the home)? How has robotics already changed our lives? Can you provide an example?

A. At iRobot, we design practical robots that help people. For example, the iRobot PackBot robot being used worldwide, especially in Iraq and Afghanistan, has changed the way our soldiers deal with explosive devices.  These robots are credited with saving many lives in the process. The iRobot Roomba Vacuuming Robot is also giving people more time to devote to other aspects of their lives. And ultimately home robots will allow our elderly to live independently longer.

Q. In an old US cartoon the Jetsons, robotics played a much larger role in people?s homes and working lives. Why don?t you think the Jetsons? lifestyle has become more of a reality today? Or has it? Why?

A. The challenge is we cannot afford to build a robot as capable as Rosie at the current time, and I think doing so is a long way off. We will see teams of affordable single-purpose robots tackling problems ? perhaps all controlled by a single Human Interface Robot.

Q. How far have robotics in the home come since the 1980s and can you give me an example of a recent development in robotics technology that may change the way we live?

A. Robots have progressed from being a dream to being a practical reality. It is as significant a change as they come. From a technological standpoint, the increases of power and decreases in cost of highly integrated micro-controllers have enabled practical robots to be simple to use and effective in their tasks. Emerging technologies like WiMax will allow the physical avatars I?ve described above to become reality as well.

Q. How much is the robotics industry valued at today: in the US/ worldwide? In what areas of society are robotics having the most impact and why?

A. According to Future Horizon, the worldwide robotics market will be about $40 billion by 2010. I believe the most impact is in manufacturing, military and domestic cleaning markets because that is where manufacturers have found ways of making robots that deliver more value than they cost.

Q. What other human tasks do you think robots will be used for in the next 20 years and why?

A. Robots will take on a more prominent role in our lives in the next 20 years. In fact, within a decade, I think we?ll all use some kind of robot on a daily basis, whether it is at home, at work or both. Practical and cost effective robots will continue to simplify our lives by performing routine tasks, such as home maintenance. Robots will also be used increasingly in health care ? to dispense medicine and let the elderly live independently longer, for example.

Q. What?s the most sophisticated robot iRobot has created so far and what was it designed for?

A. Our most sophisticated robot is the iRobot PackBot. PackBot is a rugged, lightweight robot used for reconnaissance and bomb disposal. More than 800 PackBot robots are deployed worldwide, mostly in Iraq and Afghanistan. PackBot can be carried and deployed by a single soldier and is nimble enough to climb stairs and traverse rugged terrain. The robot has a new hand controller that is modelled after a video game controller for faster training and easier operation in the field.

Q. What are the most challenging aspects of applying robotics within the home? Have any major hurdles been overcome in recent years and why?

A. The home represents an incredible challenge because there are millions of them, and they are all different and they change in important ways nearly every day. This makes navigation and obstacle detection/avoidance huge challenges. In recent years, there have been significant advances in machine vision, though as of yet no one has demonstrated a vision system embedded in a practical robot.

Q. What robotic projects/products around the world, available today, do you most admire/think are useful and innovative, and why/why not?

A. There are some very interesting research development efforts in human interaction and manipulation going on primarily at companies and universities in the U.S. and Korea. I believe that there are millions of dollars being wasted on humanoid robots: walking robots are unnecessarily complex and thus far too expensive and unreliable to be practical.

Q. If you could build the ultimate robot for your personal use, what tasks would it perform and why?

A. It would do my laundry and put it away. I?m a neat freak wannabe. I am not happy unless things are put away. I?m just too busy to do it myself. Laundry is the worst offender, and a robot that could handle that task for me would significantly improve my quality of life!

A. I disagree. Today, robot vacuum cleaners are priced competitively with good quality upright vacuums. While I cannot speak for other company?s robots, iRobot Roomba owners are nearly fanatic in their appreciation of their robots. What is keeping this from growing quicker is that people who do not own a Roomba are nearly universally sceptical of the robot?s ability to clean their home. What needs to happen is not related to price, it is related to perception of these very useful machines.