Video files: getting your media centre to play media 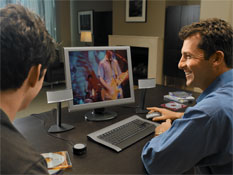 One of the downsides to this exciting new future of home theatre PCs and media players is that you have to suffer PC technology in your living room.

While your TV has an on switch and a switch to change the channel (and you can safely ignore all the higher functions like picture in picture, custom quality settings and fine tuning), a clever device such as a media PC is such an advanced system that, paradoxically, its controls seem positively arcane.

Playing a movie on a DVD player is as simple as shoving a disc into the only available slot and pressing play. On a media PC, you need to first locate the ?media? that you want to view, and then play it on the device.

But what does the PC mean when it asks you to locate the media? When you?re spooling through menu after menu, opening folder after folder, what exactly is going on? Where is your movie?

A media PC is, as the name suggests, descended from a regular desktop personal computer. It uses a technological backbone that was designed for work. It was designed to store word processor documents and spreadsheet workbooks. In recent years, consumer demand has seen the PC branch out into movies, photos and music, but the way it stores information remains the same: in files.

Of course it?s not as simple as that. In these modern and go-ahead times, many applications attempt to deal with as many files as possible. A movie player, for instance, will probably be able to play back MP3 music files as well as video.