Volvo’s all new luxury S90 is packed with technology 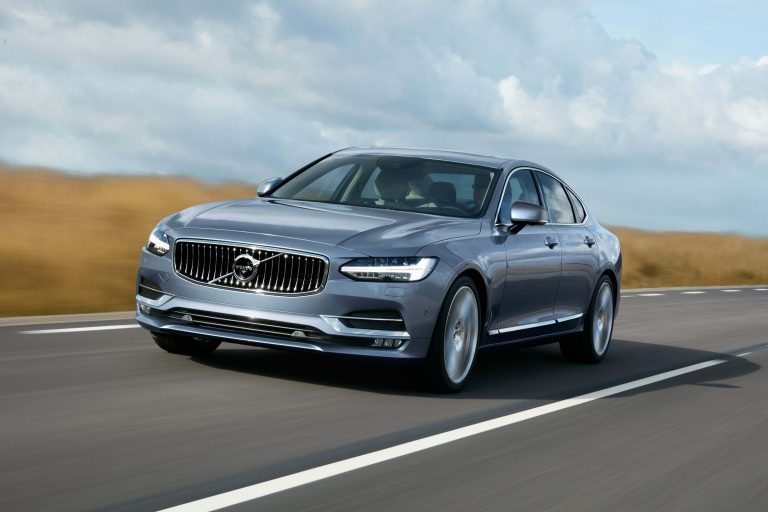 While many of us think about safety when we think about Volvo, the Swedish automotive brand is reinventing itself. While it was the first to put 3-point seat belts in its cars back in 1959, Volvo is as focused on technology and innovation as it is safety. This is certainly apparent with the launch of Volvo’s latest luxury full-size sedan, the S90. We had the opportunity to take a closer look at the technologies behind the wheel, as well as take it for a spin on a recent drive day.

Starting on the outside, the S90 wears the new Volvo design, which was first introduced on the XC90. While looks can be subjective, the S90 certainly has the goods – its low and wide stance suggests control and capability, and, like the XC90, the signature ‘hammer of Thor’ LED headlights have an unmistakable look.

And the same good Swedish design is followed through on the inside. Once you close the door, you’ll find yourself in a soothing, elegant and spacious environment that is filled with quality materials including open grained wood, brushed metal, glass and sumptuous leather.

When it comes to controlling the car’s various information, climate control and entertainment settings, it’s all quite straightforward thanks to the central 12.3 inch tablet-like touch-screen control interface. You can access just about everything via the central screen, and most menus are just one swipe away if they’re not present already.

The menus are fairly responsive, and the touch screen can be used with gloves on, not that this is much of a worry in Australia. The system also supports Apple’s Carplay, which is part of the optional Technology pack, and requires an iPhone connection via USB cable. This is like most cars with Carplay today, however the the latest 5 series BMW features a wireless Carplay option.

Even without Carplay, Volvo’s own system supports Pandora and Spotify streaming apps that connect to the internet via your mobile phone. There are also some other apps such as a clever voice memo that captures your voice notes and sends them to your email.

On the music side, we were lucky enough to test the optional $4,500 Bowers & Wilkins 1400-watt 18-speaker audio system. It sounded simply superb, with a detailed and dynamic soundstage, and there are stunning speaker grilles and housings dotted around the cabin. While it’s pricy, the B&W can certainly transport you to another world during your daily commute.

The on-board navigation is also quite good and looks fantastic on the large portrait display. Directions are fed back to you via voice, on the screen or the optional heads up display. Real time traffic updates are provided, but need to be routed through your phone’s data connection.

Volvo says that it will issue over-the-air software updates for its various systems, including improvements to the driver aids as they are developed.  We certainly love the idea of new features and improvements being added to your car after you buy it.

The S90’s Drive-E engines are technologically packed. While you might expect a combination of 6 and even 8 cylinder motors on a car of this size, Volvo offers a range of 2.0 litre, 4-cylinder petrol and diesel variants to choose from. While you might think that a 4 cylinder is a bit underpowered, this isn’t the case. Volvo’s new engine line-up is more powerful, lighter, more responsive and offers greater efficiency than the motors they replace.

To give Volvo’s S90’s diesel engines a sportier feel, they use a unique PowerPulse technique. Essentially, an electric compressor draws air into a 2-litre compressed air reservoir. During low speed driving or when the driver stomps the accelerator pedal, the stored compressed air is puffed directly into the exhaust manifold, giving the engine pressure a special ‘boost’ faster than it would during a normal turbo spool-up cycle. This drastically reduces the lag, and is something that we can attest to during our test drive, where we could barely detect any lag at all. Volvo’s PowerPulse is available in the S90’s high performance diesel (D5) automatic powertrains including the AWD variant.

From a driving perspective, we found that the S90 performed well. While it never felt like it lacked oomph, the power delivery was more subtle than savage, which is perhaps due to the smooth ride and sound-insulated cabin.

On tighter turns, the S90 managed to belay its large proportions, with good turn in and minimal body roll throughout. Braking was also more than ample, and the AWD system is always there as an option for those who want even more sure-footedness in all weather conditions.

As you’d expect with a Volvo, the S90 possesses some class-leading safety innovations including the new Run-off Road Mitigation, which is a world first. Run-off Road is designed to prevent what Volvo believes is one of the most common type of single-vehicle accidents, where a driver veers from the road due to inattentiveness, drowsiness or bad weather.

Run-off Road Mitigation will scan for the edges of the road, including road lines and edges, as well as obstacles such as trees. It operates at speeds between 65 to 140km/h and will actively brake or steer the car away from the edges of the road if it detects that the car is heading for the ditch.

Also, the S90 has Run-off Road Protection, which helps reduce injury if the car does manage to leave the road. This was first introduced in the XC90 in 2014. It senses when the car has left the road and prepares the passengers for impact by tightening the seat-belts. Also, the seats are designed to deform in such a way to absorb energy and protect the spine.

Included as standard on all S90s is City Safety, which is a suite of avoidance systems that work together. These are designed to detect potential collisions with pedestrians, cyclists and other vehicles in a busy city environment, day or night. The system will warn the driver of an impending collision, and, if necessary, apply the brakes.

City Safety also helps mitigate or avoid oncoming collisions in an intersection. If a driver enters the intersection and tries to turn in front of an oncoming car, the system can apply the brakes to avoid the collision, or in the case of an unavoidable collision, it will tighten the seatbelts in preparation for an impact.

And if you’re out of the city (or still in the city in some countries) there’s the Large Animal Detection avoidance system. Using cameras and radar it can recognise a large animal such as a deer, cow, elk or moose.

If a large animal is detected ahead, the S90 will alert the driver to act and help with braking. If a collision can’t be avoided, or the driver doesn’t react, automatic braking reduces the vehicle’s speed to mitigate the severity of the collision, and seatbelts will also be pre-tensioned.

Unfortunately, the system won’t recognise our native fauna such as Kangaroos and Wombats but Volvo is looking at adding these animals in the future.

Pilot Assist essentially handles braking, accelerating and steering in a variety of conditions, provided that lane markings are visible. So, in creeping traffic, the S90 can autonomously move forward, even from a complete stop, with traffic, and even turn the wheel and steer around corners.

The same technology applies at motorway speeds too in normal or heavy traffic. Essentially this system uses the car’s radar-adaptive cruise control to manage the traffic flow relative to the speed you set, and the lane change assist system follows corners based on lane and edge markings.

New in the second generation of Pilot Assist is that it operates up to 130Km/h, and it no longer needs a lead car to follow.

It’s important to note that despite the Pilot Assist taking over, you are still responsible for the control of S90, and need to have your eyes on the road and hands on the wheel at all times. If you don’t hold the wheel, after a couple of minutes, the system will detect this, and will sound a warning and turn off.

During testing the Pilot Assist, we found that it didn’t follow some curves all that well and needed some steering input to set it right, and was sometimes confused by off ramps during motorway driving. Also, we found that the system was a little too eager to shut off and didn’t always detect that our hands were on the wheel.

However, in most instances, the Pilot Assist worked well, especially on the motorway, and it allowed us to relax our concentration slightly, which will be handy on longer drives. We also love the idea of not having to pay complete attention during monotonous start-stop traffic, which is what many of us have to deal with.

The S90 is an exciting addition to the Volvo range, and is a great indication of the models to come. The S90 model line-up includes the petrol T6 Inscription and diesel D5 Inscription, which will be at the dealerships during October. The T5 Momentum and D4 Momentum will follow in November. Further variants will be available during the first half of 2017.