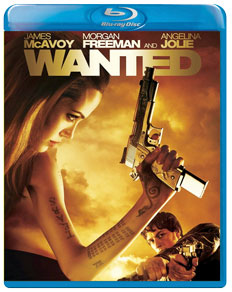 Based on the Mark Millar comic book of the same name and entirely reversing aspects of the central premise, relative newcomer James McAvoy convincingly fills the boots of Wesley Gibson, son of the greatest assassin of all time and heir to the title.

After his sleepy, unfulfilled life is overturned by the gorgeously dangerous Fox (Angelina Jolie), Wesley learns the secrets of his new trade under the rather silly and bizarre tutelage of assassin leader Sloan (Morgan Freeman). Somewhat spoiled by the stupidly unquestioning behaviour of the members of ‘The Fraternity’ who, incredibly, take their orders from a weaving loom, the action in Wanted is nevertheless exciting, fun and relentless.

With a nice plot twist and a surprising late turn of events occasioned by Jolie’s character, this is great entertainment with tons of brilliant stunts and decent acting, once you’ve switched your brain to ‘sleep’ mode.