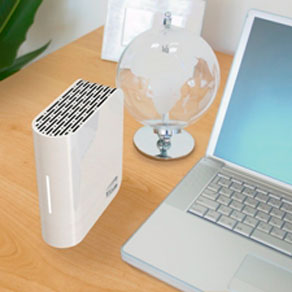 Western Digital today introduced its newly redesigned My Book World Edition network storage drive, simplifying the critical but tedious task of backing up an entire household’s precious files. Designed for consumers who have multiple computers on a home network, the new drive will be available in 1 terabyte and 2 terabyte capacities, and is compatible with PC and Mac computers.

Consumers are amassing increasing amounts of digital media on their computers, including irreplaceable photos, movies and documents. While 70 percent of users in a recent WD study of 1,500 U.S. consumers claimed to be “backing up,” most use sporadic, tedious processes such as copying to CDs/DVDs or USB thumb drives. Having several computers multiplies the work. My Book World Edition network drives are designed to automate and simplify the backup chore for the 36 million networked homes in the U.S. according to research firm Parks Associates. Just plug the My Book World Edition drive into a network router, click a few buttons and the My Book World Edition storage device backs up the files from all the PCs and Macs on the network. Any changes to the files on these computers are automatically and continuously backed up to the drive.

My Book World Edition’s massive capacities are available from any computer in the home. Combined with high performance, this makes it easy to build a shared digital media library. Music, photos and videos can be streamed directly from the My Book World Edition drive to any PC, Mac or connected DLNA media player (such as Microsoft Xbox 360 and Sony PlayStation 3 game consoles, wireless digital pictures frames or TVs) using the integrated UPnP (Universal Plug and Play) media server and iTunes Music server software. Families can also securely access and share their centralized files from anywhere in the world where they have access to the Internet, using the My Book World Edition drive’s web remote access service.