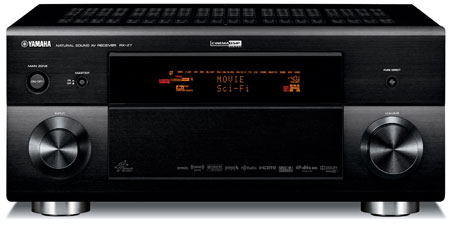 The ‘big boys’ of the AV receiver world like to mix it up from time to time. There’s a fair amount of one-upmanship also, as each tries to outdo one another with the latest and greatest AV mega-receiver.

A long time player in this fray has been Yamaha, with the current RX-Z11 pulling the heaviest of surround sound punches for the company. Now this behemoth has spawned a son, the RX-Z7 under review here.

Slimmer – a bit. Lighter – by some 14 kilos. Less expensive – almost half the price. The RX-Z7, however, is still a serious AV receiver by anyone’s standards.

Where to start? There’s not much the RX-Z7 hasn’t got covered. It’s rated at the same high power output as the Yamaha RX-Z11, some 140 watts per channel, although this is ‘just’ a 7.1 channel design, as opposed to the 11.1 of the flagship. There are preouts for all channels, too, should you (insanely) want to add external power amps to further beef up the power output.

This too is a network receiver and has a web-browser interface that allows you to control the RX-Z7 using any PC or web-enabled PDA (such as an Apple iPhone or iPod Touch) over the home network. The Ethernet connection also allows you to stream music (WAV, MP3, WMA, AAC) from your network or the internet, and to access WMA/MP3 internet radio stations. An optional dock allows it to play nice with iPods, with playlist information displayed onscreen via Yamaha’s GUI.

It’ll decode just about everything, including the latest Dolby True HD and DTS-HD Master Audio soundtracks, plus there are five HDMI 1.3a inputs (including one on the front panel) and two outputs, which is handy for those running both a projector and flat panel display. You can’t run different sources to two displays, however, just a single source.

There are more than enough connections to cater for the most involved home theatre system, with eight digital audio inputs, front and rear USB ports for attached thumbs drives and portable music players, six S-Video inputs, three component video… the list goes on and on.

Multi-room and multi-zone use is also well catered for with audio distribution to up to four individual zones, and component video assignable to zone 2-4. I could carry on, but space doesn’t allow, so let’s find out how the RX-Z7 performs.

Yamaha’s YPAO (Yamaha Parametric Room Acoustic Optimizer) is the first step and takes care of accurately recognizing the size of my loudspeakers, then setting up levels, delays and distances, plus full bass management for the subwoofer LFE channel.

Right from the get-go, it’s obvious this is an AV receiver with bags of power, control and ability to dish out the dynamics. Jumping straight into the action, it was time for some loud stuff. The scene where the Tripod emerges from under the street in Spielberg’s War of the Worlds is one of the most bass-crunching and dynamically challenging you’ll find. Rarely have I experienced this movie sequence with as much ‘slam-you-in-the chest’ impact and intensity as this Yamaha serves up. It’s got so much headroom too, and drives a 7.1 channel speaker configuration with absolute ease. With the volume cranked I did notice the Yamaha runs pretty warm, so I wouldn’t be sticking it in a cupboard or placing other gear on top – it needs room to ventilate.

Far from being all brute and no brains, the RX-Z7 is also highly tactile, placing and steering effects around the room with almost unnerving accuracy. The BD of Sweeney Todd demonstrates this well, creating a suitably dark sonic mood to match the onscreen atmosphere. And when the cast often break in to song, the Yamaha makes the different vocal characters sound natural, wholesome and perfectly placed within a very broad soundstage.

Hit the ‘Pure Direct’ button and the RX-Z7 transforms into a more than decent two-channel amplifier for music; there’s that same bass power and control, with a smooth and extended treble that doesn’t ever sound overly harsh or forced. And to help tidy up the sounds from your iPod or networked music library, there’s Yamaha’s Compressed Music Enhancer technology.

And, as is usual with all Yamahas, there are ample (38 total, with 22 cinema modes) DSPs to keep the most avid button-pusher happy, if you fancy replicating the acoustics of a Munich church, for example.

Far from simply being a stripped-down version of the RX-Z11, this is a fine top-end AV receiver in its own right. At around $4,000, it’s still a reasonable amount of outlay, but with its capability as a movie and music performer, plus great system flexibility and connectivity, the RX-Z7 makes an excellent all-round AV solution.