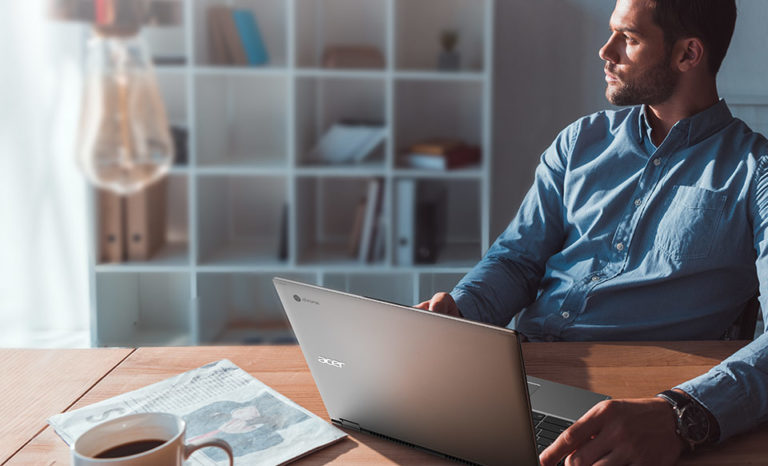 Acer has been around for a long time – since 1976. It has been a key global PC player as a Taiwanese based, independent designer and manufacturer in an increasingly China-centric PC supply world.

So, MD for Acer Oceanic Region Darren Simmons reminded me. Acer opened its Australian offices and local manufacturing facilities in 1990 – well before players like HP and Lenovo became known in the consumer PC space.

Darren has been in the PC industry almost as long as I have. I started importing, assembling and selling PCs and components in the early 80s via Intermedia Computers and in the early 90s through Techmart, Queensland’s first Computer Super Store (sadly closed in 2012 due to the impact of online sales, and cheap grey/parallel market forces). Darren used to sell me Acer and other products. He was one of the ‘good guys’.

Darren first joined Acer in 2000 after a career with HP and many of the IT pioneers. He is proud that many of Acer’s customers have been with the company as long, or longer than he has been.

And that is how I feel about Acer – it was nice to be part of the ‘family’. I even met its founder Stan Shih a few times on my pilgrimages to Taiwan and China to secure component vendors.

Acer is a long-term company with a lot more at stake now than PCs.

Along the way, Acer has either spawned or acquired a range of companies.

One of Techmart’s major component suppliers in the mid-90s was Acer Open (AOPEN) that built a deserved reputation for first class motherboards and components. We used these in commercial grade PCs and had an incredibly low failure rate (under 1%) – unheard of at that time.

Another was monitor manufacturer BenQ (Bringing Enjoyment N Quality to life) formed in 2001. BenQ LED/LCD flat panel monitors became a staple product line, and it is heartening to see the company going from strength to strength making some leading-edge 4K monitors today.

Another spin-off Apacer supplies memory modules. And, its spinoff Wistron is the third largest ODM for global brands like the Microsoft Surface range.

Techmart had many suppliers, but it really relied on Acer and its spinoffs for success. In fact, if you are nostalgic have a look at a scan from one of its newsletters in 1994 (at the end of this article).

Acer (Australian website here) today has a focus on the IoB – Internet of Beings (instead of things). It believes we (beings) will connect to the fabric of the internet via the Things we use (BeingWare) – the cars we drive, the devices we compute on, unified communication, smart homes, health diagnostics and so much more. That broad focus – more than things – allows it to think outside the beige PC box.

Anyway, I digress – its good to know that what we know as a PC/laptop/server/screen/projector/signage has grander visions for us all.

At the recent Acer event, it highlighted the new Swift 5 laptop. It is an ultra-light (<1kg), ultra-thin (magnesium-lithium and magnesium-aluminium alloy construction), huge 14 or 15.6”; FHD, 100% sRGB screen (in essentially a 13” body due to narrow bezels); powered by Intel 8th Generation Core i5/i7; PCIe NVMe SSD; and a 10-hour battery. Prices range from $1799 to $2499 giving exceptional value for what looks like an excellent, uber-light device.

Darren was also proud of its Predator Gaming range. In particular, Acer showed a very high specified, Intel i9-7900X 10-core Orion 9000 tower with, Customisable ARGB/RGB lighting, and a Cooler Master system that could keep Hades cold! The price – from $6499 and they are selling well.

And, what is it with these shrouded monitors like the Predator x27? Well, it’s more than something to stop distraction – it has 384 Dynamic Backlit Zones, 144Hz refresh, 4ms response time, NVIDIA G-Sync and uses a first grade, 4K, 1000 nits, HDR, 99% Adobe RGB, Quantum Dot panel. Every gamers dream – nirvana.

GadgetGuy’s take: Acer should be on your shopping list

We will be paying a little more attention to Acer this year – our last reviews were in 2016! It is good, honest, well-priced gear with a lot more skin in the game – it assembles (finishes) locally

“It’s as Aussie as you get and I think that’s a great thing. I’m passionate about building things locally. I’ve got 200 staff in Australia. Our message is that we are much more than Acer computers, says Darren.

With a renewed channel focus and a restructure in both the sales and delivery areas, it could be an Australian market leader once again.