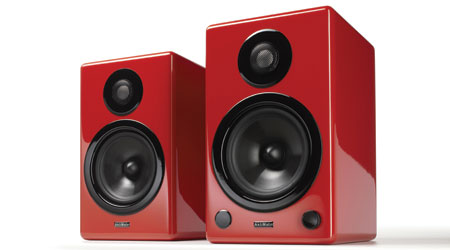 There are some truly incredible high fidelity iPod/iPhone docks around, with glorious speakers built in. But most of them suffer from one enormous problem: they simply aren’t very good at stereo.

This is where the Aktimate Mini comes in.

It would be rude to call the Aktimate Mini, without qualification, an iPod dock. More appropriately, it should be regarded as a pair of high quality compact loudspeakers with a built-in iPod interface and amplifiers.
The Aktimate Mini is in two main parts, each of which looks like an attractively finished bookshelf speaker. They are available in a glossy black, red or white finish.
The right-hand speaker is a 4 ohm loudspeaker with a 25mm metal dome tweeter and a 130mm polypropylene bass/midrange driver in a bass reflex enclosure (the port is at the back). There is no speaker grille, so the larger driver is exposed. A metal mesh protects the face of the tweeter.
The left speaker is the same, except that it is also full of electronics. It has a 40 watt per channel stereo Class A/B amplifier built in. The left speaker connects to the right through a length of regular speaker cable, included with the unit.
On the top under a pop-up panel is an iPod connector. You get a full set of plastic cradle adaptors with the unit so any iPod Classic, Nano, Touch or iPhone should fit.
Also at the back is a 3.5mm stereo input, suitable for use with any portable music player, a pair of stereo RCA inputs, a pair of stereo RCA outputs and a composite video output. The audio outputs can be used to drive another set of Aktimates (or any other speakers) or a subwoofer, while the composite video output is for displaying video from the iPod (but not menus).
A thoughtful touch is the USB socket. This is provided simply to power USB devices for charging their batteries or whatever. As long as your MP3 player can operate normally while being charged via USB, you can have the same freedom from battery-life considerations as you have with an iPod.
A volume control is on the front, but generally you will operate the unit with the credit-card sized remote control

My first impression was of fine, balanced and extremely well controlled music, and for the most part that remained my judgement. Especially on sparser recordings, the separating out of instruments from the mix so that they could be enjoyed on their own terms, while still remaining part of the musical whole, was reminiscent of speakers selling for a thousand or more dollars.
The speakers were also extremely well balanced tonally. Bass was more controlled than powerful, but it also remained balanced and beautifully tight, and enough of a rock kit’s kick drum was reproduced in a clean, distortion-free way as to make the speakers sound even more convincing.
The one limitation was volume level. The speakers seemed perfectly happy to produce short-term peaks without limitation or distortion, but when the average level of densely mixed music became high, they became confused and a bit harsh, as though the amplifier ran out of power. That was in my big room at quite high levels. In a modest room and without striving for party levels, they were fine.
I used a current model iPod Classic, a fifth generation iPod and a current model iPod Touch. The first and last worked perfectly, but the 5G iPod didn’t seem at all happy in the dock, rebooting several times, and then producing no sound through the speakers for five minutes before finally kicking into operation. When it did work, selecting another track to play made it reboot back to the Apple logo again.
I was still able use it, charging it from the USB port and running a cable to the 3.5mm input, but the skip and pause facilities of the remote were lost.
If you have an older iPod to which you remain devoted, it’s probably worth checking out compatibility in the shop.

But you probably have a newer iPod anyway, and those worked perfectly. You are unlike to find any other ‘iPod dock’ with anywhere near the sophistication in sound quality and excellent stereo performance offered by the AktiMate Mini.
Overall
Features
Value for money
Performance
Ease of Use
Reader Rating0 Votes
True high fidelity sound; Great stereo performance; Strong and musical bass; iPhone compatible; Remote control
Some limitations to volume levels; Possibly some incompatibilities with old iPods
4.2