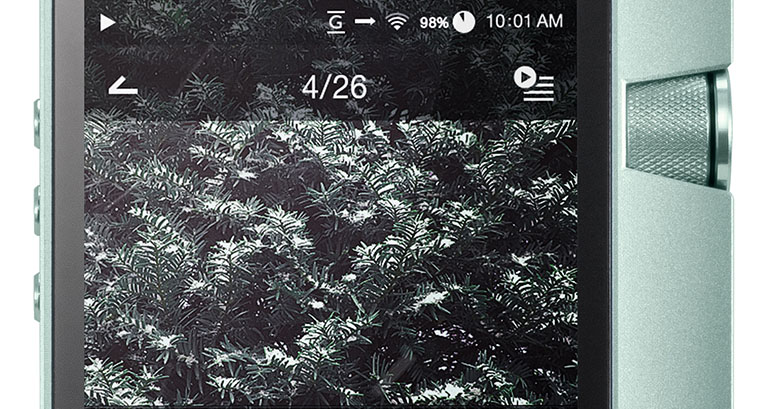 Audiophiles tend to sniff a little at iPods. The iPod Touch, the iPod Nano and the iPhone are all much more comfortable with standard resolution (that is, CD-quality) music files than high resolution.* So other players have filled this space. One of the most prominent is Astell & Kern, a kind of offshoot or rebranding of the Sound Korean iRiver, which released its first MP3 player way back in 2000, a year before the launch of the iPod.

Astell & Kern portable players are truly premium portable players. The current top of the line  AK380 model sells in Australia for $5599. That’s a lot to pay even for extremely high performance. So now the company has launched the AK70 which sells here for $999.

That may still sound like a lot, but the player is just about as well built and equipped as the high level models. It features an anodised alumunium case (whether or not one is keen on the ‘misty mint’ colour is a matter of personal taste). It has a touch-sensitive colour display screen for selecting music and controlling the unit. There’s 64GB of built in memory. That’s sufficient space for more than 350 CD-quality albums compressed losslessly using FLAC. If you prefer quantity over quality, that’ll fit well over a thousand CDs worth of MP3. But you can also slot in a 128GB microSD card, tripling the capacity.

It supports all regularly used digital audio formats, including Apple’s MP4 and ALAC. Audiophiles will likely use FLAC and DSD. FLAC up to 24 bits and 192,000 samples per second is supported, as is both DSD64 and DSD128. To ensure the highest quality, in addition to regular headphones and earphones, the AK70 supports 4-pole balanced headphones. But it can also feed an external digital-to-analog converter (DAC). You load it up with music by plugging it into a computer and dragging the music straight onto its storage. No need for special iTunes-like software, although A&K does have some available.

The unit likely uses Android as its operating system since that has what has been used by other A&K models I’ve looked at. The unit also has WiFi built in.

* High resolution? CD-standard music is recorded using 44,100 samples per second, and 16 bits (ie. around 65,000 levels) per sampling. High resolution audio is considered to be music recorded at more than 48,000 samples per second, and with 24 bits per sample. Typically sampling rates of 88,200, 96,000, 176,400 or 192,000 samples per second are used. Direct Stream Digital or DSD (the format used on Sony’s Super Audio CD ) is also regarded as High Resolution, although there are even multiples of this. DSD64 is the standard version, while DSD128 and DSD256, with double and quadruple the bitrate, are increasingly becoming available.