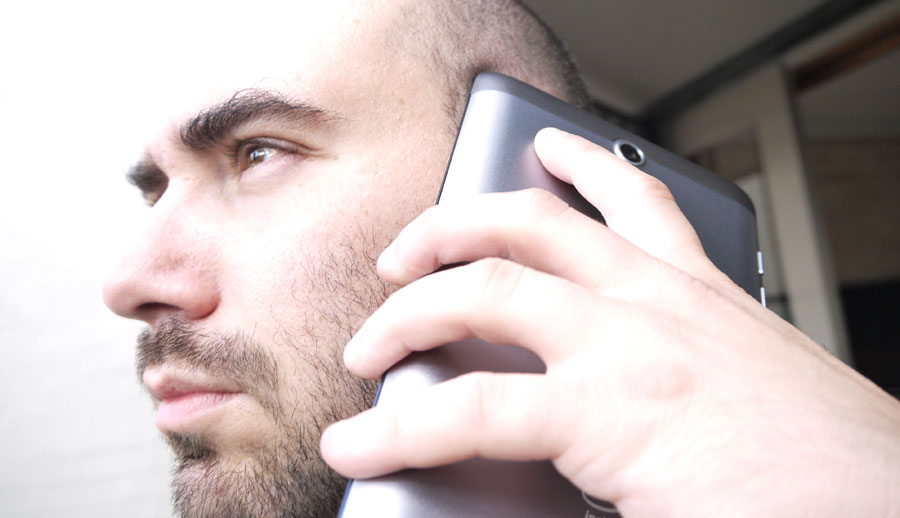 How big should a phone be? That’s the question Asus is asking with the Fonepad, a product that aims to bridge the gap between phone, tablet, and really provide a proper middle ground for anyone that’s unsure precisely what they want.

Part phone, part tablet, the Fonepad is kind of what the name suggests: a merging of the two.

As such it has to have some pretty decent insides to do the job of two devices.

Inside the Asus Fonepad, you’ll find an Intel Atom processor, a first for us as we’ve only seen Intel’s system-on-a-chip (SoC) processor used in laptops and tablets with Windows up to this point, and certainly not a smartphone based on Android.

The Atom processor used here is one of two versions, with one model of Fonepad sporting the 1.2GHz Z2420 (available in the 8GB Fonepad, the one used in this review), while the 1.6GHz Atom Z2460 is used in the 32GB variant.

These chips are paired with 1GB RAM and Android 4.1 “Jelly Bean,” working alongside either 8GB of storage or 32GB, depending on how much you need or want to spend. A microSD slot is available in the Fonepad, making it possible to expand that storage considerably.

Connection wise, it’s all relatively standard fare, with 3G, Bluetooth 3.0, 802.11 b/g/n WiFi, and GPS. Unlike other phones we’ve checked out, there is no 4G or Near-Field Communication (NFC) in the Asus Fonepad.

There are cameras here too, though the rear camera is set to only three megapixel with no flash, while the front sits at 1.2 megapixels.

All of this sits under a 7 inch In-Plane Switching (IPS) display supporting the high-definition capable resolution of 1280×800, with ten points of touch supported on the touchscreen.

At 7 inches and with that resolution, the pixel aspect ratio is roughly 215, a little over one hundred lower than that of the iPhone 5, though with a bigger screen, the viewing distance will be different in comparison.

A microSIM can be thrown into the Fonepad, and in a first for 7 inch tablets, phone calls can even be made, with the SIM able to do more than just be used for mobile data.

As with all phones and tablets these days, buttons are few and far between, with the soft buttons of an Android device based entirely on the screen from the Android software, and only a power button and volume rocker on the left side of the Fonepad making up the physical buttons.

Two ports can be seen at the very bottom of the device – microUSB and a 3.5mm headset jack – while the top plastic section of the phone’s back can be removed, revealing the microSIM and microSD slots.

Easily the biggest smartphone we’ve had in for review, the Asus Fonepad takes the phablet concept to new heights. Literally.

We’re still not big fans of the term “phablet” – it’s clunky, silly, and makes us think more of “fable” than “phones that look and feel like a tablet” – but if anything qualifies, this is certainly the product.

Bigger than both the 5.5 inch Samsung Galaxy Note 2 and 6.1 inch Huawei Ascend Mate, the 7 inch Asus Fonepad may as well be a Google Nexus 7 with an Intel chip and phone capability, because on first glance, that’s what we’re reminded of.

It’s a pretty basic looking product, with a black frame, Asus branding, speaker up top, and a front facing camera.

The back is made from a light metal which is cool to the touch and arrives in either titanium grey (our review model had this) or champagne gold, with a top section that can be removed to reveal a microSIM and microSD slot.

In the hands, it feels just like any 7 inch device, and while the back is metallic and not the quilted rubber the Nexus 7 uses, we can see the design hasn’t really moved far from that device, hardly surprising given both were made by Asus.