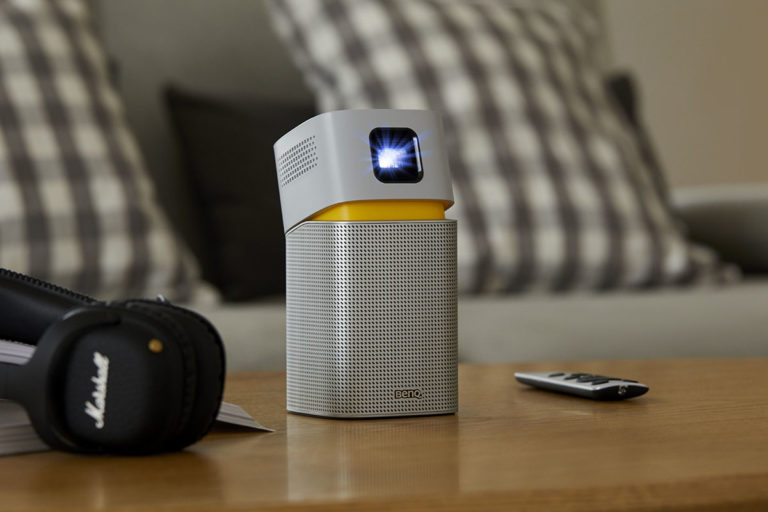 The BenQ GV1 stands 155mm tall and is only 80mm wide by 80mm deep. The top third can tilt up by a few degrees to allow you to align the picture vertically on your screen. But it applies an automatic keystone adjustment if you do that in order to hold the image to the correct shape. And that means losing resolution, so it’s best to align the picture to your screen or otherwise keep it parallel to your display surface.

The projection geometry is more-or-less fixed. No zoom, but there’s a slightly fiddly focus knob on the side. The resolution is 854 pixels across by 480 pixels vertically. I normally give a sense of projector geometry by indicating how far the projector must be from the screen for a 100-inch picture. With this projector it’s a little under 2.9 metres. But I suggest that you go for a smaller screen size, since the projector brightness maxes out at 200 ANSI lumens.

It is powered by an Osram Q9 LED lamp, which means it’s fast on and fast off, wastes relatively little power, and lasts a long, long time. In normal – the highest power – mode, it’s good for 20,000 hours. In economic mode it’s 30,000 hours. That’s many years at many hours per day of viewing.

A built-in battery provides for disconnected operation for up to three hours.

There are three ways of feeding signals to the BenQ GV1 projector: via the USB Type-C input, wirelessly over your home network, or wirelessly via a direct Wi-Fi connection from a device to the projector.

When you first switch on the projector, you’re presented with a screen for setting up your network connection. Press “OK”, switch on Wi-Fi, select an access point and use the on-screen keyboard to enter the password, and you’re connected. When you’re connected, the top of the home screen shows you how to cast your device wirelessly, with separate options for iOS and macOS, Android, and Windows. The text was misleading. For example, the “Wireless Projection for iOS & macOS” option said “Ready to AirPlay! Select ‘39AJC’ to connect.” Uh, no actually. You choose “Screen Mirroring” on your iOS device and then select “BenQ GV1-345a” to connect. 39AJC is the SSID of my Wi-Fi access point.

Anyway, ignore those misleading instructions and simply connect to BenQ GV1-something. The last few characters are likely specific to the particular projector, and thus different to the review model.

Did my devices connect? Well, some of them did. My iPad and my iPhone certainly did, using AirPlay screen mirroring. The BenQ projector popped up instantly on their list of available devices, and the connection took only a couple of seconds. Picture quality was okay within the hardware limits provided by the projector. Just don’t expect fine text to be readable. Downscaling from 1080p or higher to 480p tends to shed a fair bit of clarity and sharpness.

Likewise, my now ancient Mac Mini connected properly – it’s running the latest macOS … if very slowly. Again, once I’d enabled AirPlay displays, the BenQ GV1 popped up virtually instantly. I chose it from the list and within a couple of seconds I had the Mac display mirrored to the BenQ GV1 projector.

In all three cases, latency was tolerable. Clearly it was well under half a second.

Devices not connecting to BenQ GV1

However, my Huawei P30 Pro could not find the projector, nor could two separate Windows notebook computers, one of them a Microsoft Surface Pro. I rebooted stuff and switched stuff off and on, but I could not get the BenQ GV1 to appear on the list of available connections. Was something else wrong? I switched on my LG OLED TV and all three of those devices instantly found it, and readily connected. So did the Samsung tablet. The Apple devices didn’t of course, because the TV does not support AirPlay. I have not idea why certain devices did not work with screen casting via Miracast, while at least one other was fine.

I wrote all that soon after setting up the projector. After a while I started exploring its menus and found one for updating its software. That was a little surprising. Most equipment these days checks for updates and lets you know if one’s available. Still, I installed it in the hope that it would fix this. The installation took well under ten minutes and consisted, on my part, of pressing the “OK” button on the remote control a couple of times. Afterwards, connectivity was exactly the same as it had been beforehand.

The BenQ GV1 projector comes with an IR remote control. It’s a little thing, slimline and attractive and runs off a single button cell. I couldn’t get it to work initially, so I went to check whether the battery was flat. The button was encased around the edge by a plastic ring. This didn’t seem to interfere with the contacts in the remote, but it certainly interfered with my battery checker. I thought maybe the ring was flexible enough to be slipped off. It wasn’t. I cut it away and found that the battery had plenty of charge, so I popped it back in. The remote then worked. I found that it worked best by pointing it at the screen. I’m guessing that the IR receiver is on the front of the projector. The IR beam hits the screen and bounces back into the detector.

But there’s an app for that. Specifically, the BenQ Smart Control app. I already had it installed on an iPad after I’d reviewed another Android-drive BenQ projector. When I fired it up, it instantly found this projector and controlled it. One tab in the app provides simple press-button control, like the remote. The other tab produces a “mouse-pad” so you can move an on-screen arrow with your finger. It’s far more effective than the “mouse” mode of the remote, with which you move the pointer with the arrow keys.

It has been many years since I’ve seen a projector with resolution as low as this one. Sorry to be so blunt, but wow. 854 by 480 pixels. That’s actually lower than free to air standard definition broadcast TV or Australian DVDs (which are 720 by 576 pixels). The projector can handle full HD input signals but downscales them to match the output resolution. Initially I was going to say that BenQ should do something about this, but then I noticed in the specifications that the Digital Micromirror Device which creates the picture measures just 0.2 inches, or 5mm. That, presumably, is determined by the very compact geometry of the projection engine in the BenQ GV1 projector. I believe that smallest full HD DMD available from Texas Instruments is 0.47 inches – 12mm – in size. Since DMDs have hundreds of thousands – millions in some cases – of physically moving mirrors on their surface, I suppose downscaling a full HD DMD to this size is difficult, or perhaps even impossible.

Anyway, don’t expect a sharp picture. I even found it a little hard to achieve sharp physical focus. The control on the side is quite course in its operation, so I was overshooting a lot in the adjustment. Perseverance brought about a clarity which exposed something of a screen door effect from the grid of pixels used to form its images. The projection panel must have some space between individual pixels, if only to allow those mirrors to move to and fro without risk of fouling their neighbours.

If you have picture too big for your position relative to the screen, you’ll seen that grid of black lines across the picture. If so, move the BenQ GV1 projector a little closer to the screen.

Now, the picture produced by the BenQ GV1 is not super bright. The rated 200 ANSI Lumens is less than one tenth of that you’d expect from a typical home theatre projector these days. I’d just note that while, yes, the BenQ GV1 will have trouble competing with ambient light in some circumstances, if you can keep the room dark, it’s fine. One tenth the measured brightness is subjectively about half as bright.

Measuring full white projection at the default settings from a range of about a metre, it delivered around 440 lux. (Note, lux is not lumens. One lux is the one lumen per square metre.) That’s when the BenQ GV1 was plugged into power. When I yanked the power cable – the battery was fully charged – that fell back to about 220 lux. So the unit halves power to extend battery life. In a dark environment, halving the power did reduce the brightness noticeably, but modestly.

As an Android device, the BenQ GV1 can run Android apps, although only a selected number of them have been made available, as is typical of Android TVs and display devices. You get Netflix and YouTube, of course, pre-loaded. But you can also install Tubi and quite a few other lesser-known streaming services. I could not find Stan or ABC iView. There is also a built-in player for media on any USB devices you insert into the USB-C port.

But of course you can also play anything that your phone will receive and mirror to the BenQ GV1.

The sound was surprisingly good for such a compact device that, really, is intended for other things. Apparently the built in speaker has five watts of power behind it. But if you really want a portable Bluetooth speaker, then get one of those. It will be cheaper and sound better for the size. But it was good enough for an intimate viewing with a few people in the room.

Using the BenQ GV1 with a Blu-ray player

I ran a HDMI cable from my UltraHD Blu-ray player to the BenQ GV1 via the HDMI to USB Type-C adaptor provided with the projector (it also comes with a nice soft carry bag.) It worked pretty well, apart from the obvious loss of resolution due to downsampling to 480 pixels high. However some signals simply didn’t work: specifically 576i50 and 1080i50. I fiddled around with the output settings of my player – it was hard going because half the time the projector would not accept the input, and I’d have to return to “Auto” so I could again see the menu to fiddle some more.

With the player’s output set to “Auto” the projector showed 576i50 stuff at 720p50. (Usually a HDMI source device set to auto will query the HDMI sink – the projector in this case – and ask its preferred resolution.) If I forced 576p, the projector strangely ran it at 60 fps rather than 50fps, resulting in jerky motion. But, hey, if you’re after super-duper home theatre performance, BenQ has plenty of other products on offer for that. This is all about portability and convenience, so just leave the output of your player on “Auto”.

The BenQ GV1 is a fun projector that many will find very useful, especially if you just want a large picture from a convenient device and aren’t too fussed about home theatre quality.