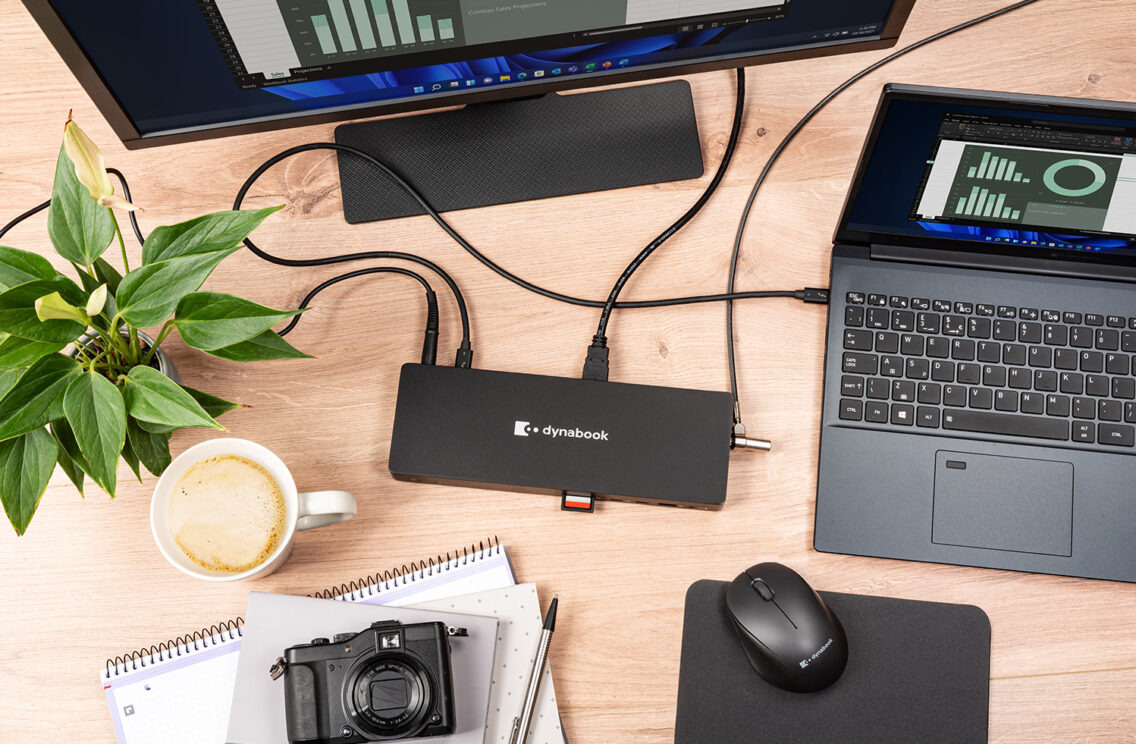 Connecting a desk full of bandwidth-hungry peripherals with a single cable, the Dynabook Thunderbolt 4 Dock satisfies the need for speed.

Even before the pandemic forced us all to embrace working from home, a dock was a handy way to move a notebook computer between desks without the need to disconnect a whole mess of cables. The dock lives on your desk, connected to everything from your monitor, keyboard and mouse to your desktop printer, external storage, Ethernet cable and AC power. Simply connect the dock to your notebook with a single cable and you’re ready to work or play.

With the rise of the ‘hybrid office’, as people move between home and the office during the week, a desktop dock is more useful than ever. Wherever you are, simply plug in the single cable and you can hit the ground running.

USB docks have been around for years, initially only supporting simple devices like keyboards and mice. Upgrades to faster connection standards have allowed them to support more simultaneous devices. Thunderbolt 4 is the current speed king: using a USB-C plug to offer 40 Gbps bidirectional bandwidth and PCIe data transfer speeds of 32 Gbps. In other words, it’s the one connection to rule them all – you can connect everything but the kitchen sink and it won’t skip a beat.

The Dynabook Thunderbolt 4 Dock takes up a bit of space on your desk, although that’s to be expected when it’s packing so many ports. The slender black design means it shouldn’t look too out of place and there’s a security lock slot on the side to ensure it stays put while you’re elsewhere.

The fact that it all connects to your notebook with a single cable definitely helps reduce cable clutter on your desk. The upstream Thunderbolt 4 port is at the back to help keep cables out of sight.

While there’s a plethora of ports on the back, you’ll also find USB-A, USB-C and audio ports on the front along with an SD card slot. This makes life much easier when you need to connect extra devices.

The dock also comes with a hefty AC power adaptor, which you’ll need to tuck out of the way. Thanks to the AC adaptor, the dock can supply up to 90 watts of power to the connected notebook which, depending on the notebook, might be enough to support fast charging.

The trade-off is that, unlike some USB-C hubs, the dock is totally dependent on AC power. It’s not a passive hub and you can’t even connect the upstream Thunderbolt 4 port to an AC adaptor in place of the supplied AC adaptor. That’s not unreasonable, considering that it’s a bit hefty to throw in your travel bag.

You really are spoiled for choice when it comes to connectivity. For starters, there are upstream and downstream Thunderbolt 4 USB-C ports on the back which let you daisy-chain other Thunderbolt devices. Depending on the number of Thunderbolt devices on your desk, you might be disappointed that there’s only one downstream port.

Dynabook includes a nice, long 75 cm Thunderbolt 4-capable cable in the box, which makes it easier to tuck the dock away while still being able to reach a notebook sitting on your desk.

If you work with multimedia, you’ll appreciate easy access to the front SD card slot, as well as the combo audio jack.

Of course, the standout feature is all those video ports – two HDMI 2.0 ports and two DisplayPort 1.4 ports. You can mix and match to connect up to four monitors, supporting up to 8K resolution. The extra bandwidth of Thunderbolt 4 supports up to 60Hz refresh rates at 4K.

It’s worth noting that the configuration for connecting external displays differs between Windows and Mac. To connect two external displays, some Mac users must rely on one HDMI port and the downstream Thunderbolt 4 port, which doesn’t leave that port free for other tasks. Even then it depends on which Mac you own, so it’s important to do your homework.

If you’re using the Dynabook Thunderbolt 4 Dock in the office, your IT team will appreciate the ability to better manage devices thanks to Wake-on-LAN and PXE Boot, although the latter is only supported on Dynabook laptops.

The Dynabook Thunderbolt 4 Dock is one with the lot but, to be honest, it’s overkill for most people’s needs. It’s not cheap and, to justify the expense, you need to be making the most of Thunderbolt 4 speeds, which likely means running more than one monitor at 4K resolution or higher.

Yes, but only if I really needed all those video ports and I was sure my notebook could take advantage of them.