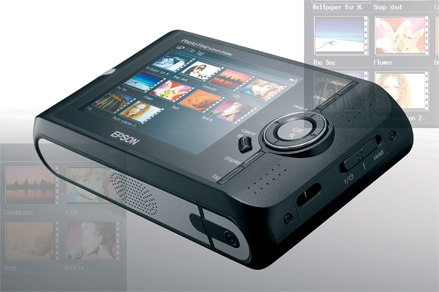 With portable media all the rage, Epson has fired a salvo with the release of the P-4500 Multimedia Storage Viewer, says David Hague.

In the past, I have played with a few portable media devices, including models from Rollei, Sony’s Playstation Portable and various units from Creative. Generally, I’ve been underwhelmed: either the menu system was finicky or non-intuitive, battery life was rubbish or the on-screen imagery was not that flash. And one would not work without the remote, which sort of defeated the purpose of the device.

So when Epson sent me its P-4500 I couldn’t help but think: “What’s going to be wrong with this one”?

Well, I have to say I am more than pleasantly surprised. The first thing that hits you is the quality of the screen; it is simply brilliant! Being 9.6 cm (3.8 inches) in diagonal, it is large enough to provide a clear view, but not so large as to make the unit too bulky, the screen being a deciding factor in the overall dimensions.

Epson says it has used technologies from video and digital still cameras to make the LTPS (low temperature poly-silicon) screen and that a higher pixel density than those used in similar devices accounts for the screen’s brilliance and colour definition. As a bonus, these types of screens use less battery power.

For the professional photographer who needs a portable device to view images and take the overflow from memory cards, this P-4500 would be a godsend out in the field. It can not only read from CF-type I and II cards and Microdrives, but also SD/MMC memory cards. To store this data there is an inbuilt 80GB hard disk. Full cards can be quickly downloaded to it, thus freeing up cards for further usage. Adaptors are available so that you can, if required, also use xD and Memory Stick cards. Immediately, I can think of a good number of pros in the motorsport field who will be stampeding to the local technology store when they hear about this.

And it is for pro photographers that the P-4500 has been designed. Apart from the screen, the clearest indication of this is its native support for displaying the RAW picture format from all of the major camera manufacturers, JPEGs up to three megabytes and the Adobe DNG (digital negative) archival format.

Its hard to believe there is anybody left in Australia that either: a) doesn’t have a mobile phone, or b) an MP3 player, and while you can’t phone home with the P-4500, you can use it to play your favourite tunes. The bundled software allows you to do all the normal things, such as make playlists and run wallpapers from your own photos or videos. The AAC format is also supported and Epson is claiming up to six hours listening time – just enough for a Sydney to Perth flight. Control is by a corded remote. Power is supplied by a single onboard rechargeable Lithium Ion battery and the unit can use mains power if required.

I suspect the main thing that videoamera owners will be interested in, however, is the P-4500’s video capabilities, right?Ã‚Â  Well in this department, you are well catered for, with the P-4500 supporting MPEG1, MPEG2, MPEG4, ASP and Motion JPEG. Additionally, the unit is an ‘official’ DivX Home Theatre Profile product – it’ll play all versions of DivX video, even the advanced ones with subtitles and alternate audio tracks. Image size up to 720 x 576 (PAL in other words) is supported and so is 720 x 480 NTSC.

Epson’s engineers have included some nice touches that make the P-4500 more than just a dumb playback device. These include a resume feature after power down, a frame-by-frame view option, and automatic exposure compensation for viewing in bright light conditions.

Ports on the P-4500 consist of AV out (for viewing on an external monitor), USB for data transfer to and from the unit (video, images, audio etc.) and an external headphone jack.

The unit we were supplied with had direct printing capability to an Epson (of course!) printer – that is, it could plug directly in and print without the need for a PC or Mac to act as a middleman. While a convenient feature, Pictbridge capability would have provided compatibility with a broader range of printers from other brands and enhanced the appeal of the P-4500.

Traditionally, photographers working out in the field have used a laptop to carry the spillover of shots from memory cards. Time is an issue here, though, because in sports photography, it is all about the ‘money’ shot and you can take hundred if not thousands to get that one shot. As it is rarely practical to lug the laptop everywhere you go, the norm is to hotfoot it back to the media centre every so often to dump down what you have already shot, and hope you don’t miss anything.

With the Epson P-4500 this is no longer an issue. It is as quick as switching memory cards, dumping one down while you shoot on the second. And 80GB of hard disk space should be enough for most pros.

In this one area alone, Epson is on a winner. The rest of the features are a bonus.